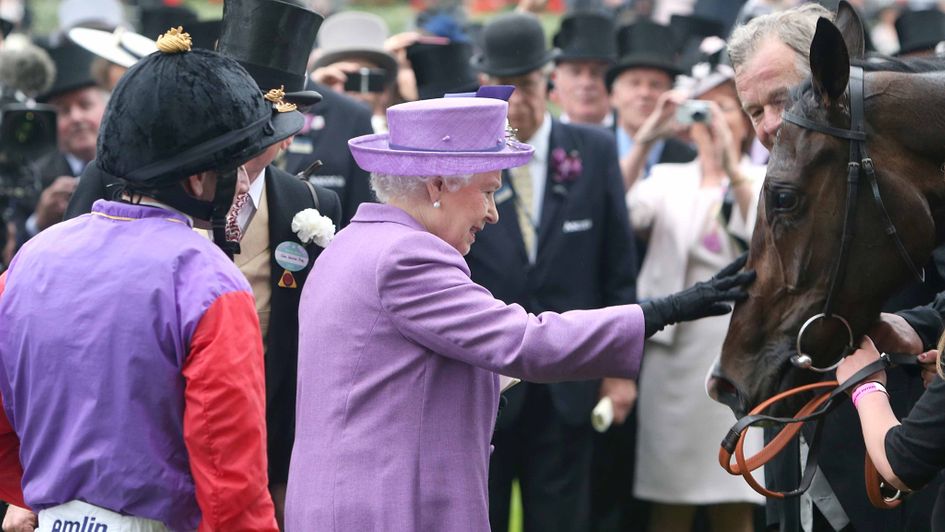 The Queen with her Gold Cup winner Estimate

The Queen: John Ingles looks back at her lifelong association with the sport of horse racing

John Ingles looks back at Queen Elizabeth II's lifelong association with the sport of horse racing.

The Queen’s lifelong association with horses of all kinds began in her early childhood when she learnt to ride a Shetland pony named Peggy but it was in her twenties when she first became a successful owner – and later, breeder – of thoroughbreds. It was on the death of her father, King George VI, in 1952, that Princess Elizabeth inherited the Royal bloodstock and the famous racing colours of purple, gold braid, scarlet sleeves, black velvet cap with gold fringe.

Among the horses the new Queen inherited was one of the best colts that would race in her name during her entire 70-year reign. Just four days after the Queen’s coronation in June 1953, Aureole finished second to Pinza in the Derby and was then runner-up to the same colt in the King George VI & Queen Elizabeth Stakes later that summer. But Aureole enjoyed a more successful four-year-old season when his wins included the Coronation Cup and Hardwicke Stakes before beating the top-class French horse Vamos in the King George at Ascot, making him the best horse of his age in Europe over a mile and a half. ‘There can be little argument’ said Racehorses of 1954, which gave Aureole a rating of 132, ‘that he is the best horse to carry the royal colours since Sun Chariot in 1942’, referring to the late King’s 1000 Guineas, Oaks and St Leger winner. Aureole went on to be a champion sire.

The Queen's horse Aureole wins the King George in 1954

Aureole’s success in 1954 contributed to the Queen becoming leading owner that year, a title she won again just three years later when she celebrated her first classic victory after Carrozza won the Oaks. Carrozza was among the horses bred by the National Stud and leased to the Queen for racing, an arrangement that continued until the end of the following decade. In the same year, 1957, another very successful three-year-old filly to race in the royal colours was Almeria, winner of the Ribblesdale Stakes, Yorkshire Oaks and Park Hill Stakes. In what were particularly successful years as an owner in the early years of her reign, the Queen won her second classic just a year later when Pall Mall won the 2000 Guineas.

Further success in the classics didn’t come again for the Queen until the 1970s thanks to the fillies Highclere and Dunfermline. Highclere, who came from the same family as Aureole, was a second 1000 Guineas for her owner in 1974 and went on to win the Prix de Diane as well as finish second in the King George VI & Queen Elizabeth Stakes. Highclere turned out to be the most influential broodmare bred by the Queen, though it was other breeders who ultimately benefited the most from that success. After Highclere’s daughter Height of Fashion won the Princess of Wales’s Stakes she was sold to Sheikh Hamdan Al Maktoum, for whom she produced the 2000 Guineas, Derby, Eclipse and King George winner Nashwan, while another of Highclere’s daughters Burghclere became the grandam of the outstanding Japanese racehorse and stallion Deep Impact.

Highclere was rated 129 by Timeform but Dunfermline was better still, assessed at 133, after winning both the Oaks and St Leger. At Doncaster she got the better of odds-on favourite Alleged but finished behind that colt when fourth in the Prix de l’Arc de Triomphe next time. 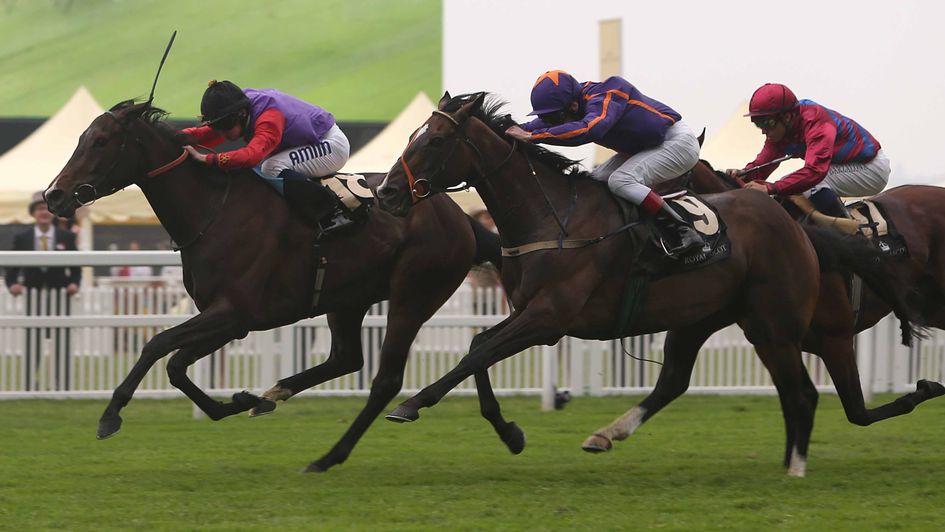 Dunfermline’s success came in the year of the Queen’s Silver Jubilee and another landmark in Her Majesty’s record-breaking reign – her Diamond Jubilee in 2012 – coincided with one of her most successful seasons in the twenty-first century. Estimate was a popular winner of the Queen’s Vase at Royal Ascot (the winning owner received the trophy from her husband the Duke of Edinburgh) after Carlton House, recent winner of the Brigadier Gerard Stakes, finished a good second in the Prince of Wales’s Stakes. Carlton House had been the first British pattern winner in the royal colours for more than ten years when winning the Dante Stakes the previous season, as a result of which he started favourite for the Derby, his third place at Epsom making him the first royal colt to be placed in the race since Aureole.

Carlton House ended up being exported to Australia whereas Estimate remained in training with Sir Michael Stoute in 2013 to give the Queen her first domestic Group 1 winner since Dunfermline in the Gold Cup back at the Royal meeting. The historic success, a first in the race for a reigning monarch, was gained by just a neck from the Irish gelding Simenon in a thrilling finish. Both Estimate and Carlton House, incidentally, were the result of links with other major breeders; Carlton House was one of four yearlings given to the Queen by Sheikh Mohammed, while Estimate came about from the Aga Khan offering the Queen access to some of his mares as an 80th birthday present. 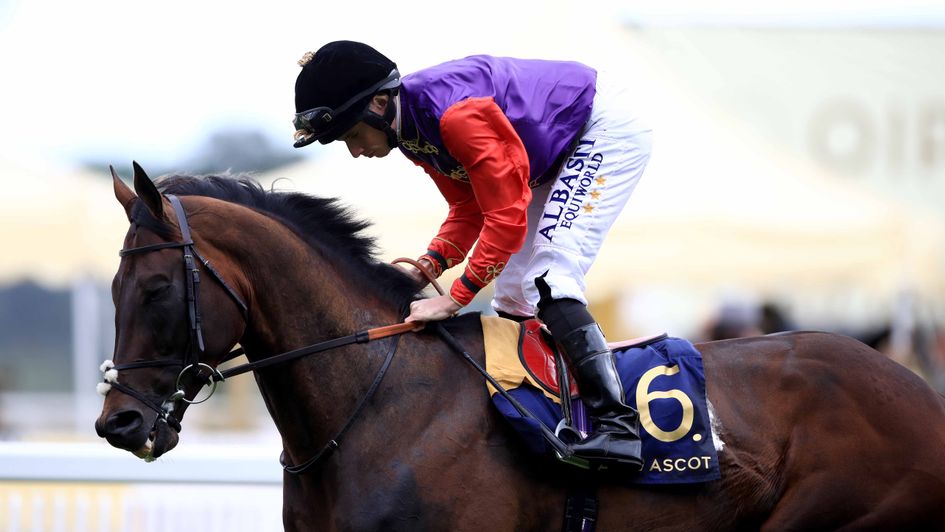 The Queen’s next Royal Ascot winner was also a timely one as Dartmouth’s victory in the 2016 Hardwicke Stakes came in the same week as his owner’s official 90th birthday. He went on to be the Queen’s first runner in the King George since Dunfermline and, in finishing third, her first placed runner in the race since Highclere in 1974. In 2020 Tactical, trained by Andrew Balding and ridden by James Doyle, won the Windsor Castle Stakes, becoming the 24th winner for the Queen at Royal Ascot.

In a special edition of Horse & Hound magazine in 2020, Estimate, as well as Aureole and Highclere among those already mentioned, was named by the Queen among five of her favourite racehorses along with Doutelle and Phantom Gold. Aureole’s relative Doutelle (rated 128) was the first high-class horse bred by the Royal Studs during the Queen’s reign, winning the Cumberland Lodge Stakes and finishing third in both the Gold Cup and King George. Phantom Gold, whose wins included the Ribblesdale Stakes (a race also won by her grandam Expansive in the royal colours), became a very successful broodmare, with her nine winners including the Oaks runner-up Flight of Fancy.

For most of the Queen’s reign, the royal colours were carried exclusively on the Flat, but when she was still Princess Elizabeth she shared ownership of a jumper with her mother who, as the Queen Mother, was to become an ardent supporter of the National Hunt side of the sport. Monaveen raced in Princess Elizabeth’s colours of scarlet, purple hooped sleeves and black cap. He won the inaugural running of the Queen Elizabeth Chase at Hurst Park on New Year’s Eve 1949 before finishing fifth in the Grand National the following spring.

The very smart chaser Barbers Shop proved to be the best of the Queen’s jumpers which she inherited on the death of the Queen Mother in 2002. Barbers Shop ran at four consecutive Cheltenham Festivals, beaten a neck in the novices’ handicap chase and contesting the 2009 Gold Cup. He also made the frame in the Hennessy Gold Cup and King George VI Chase later the same year.

A royal winner provided the highlight of Timeform’s inaugural charity day in aid of Cancer Relief which took place at Doncaster in July 1971. Her Majesty was present to see her very smart colt Charlton win the William Hill Gold Trophy which she received afterwards from the sponsor. The Queen always received a copy of the Timeform annuals after which a letter of thanks from Buckingham Palace or Windsor Castle would always be pinned to the company notice-board.