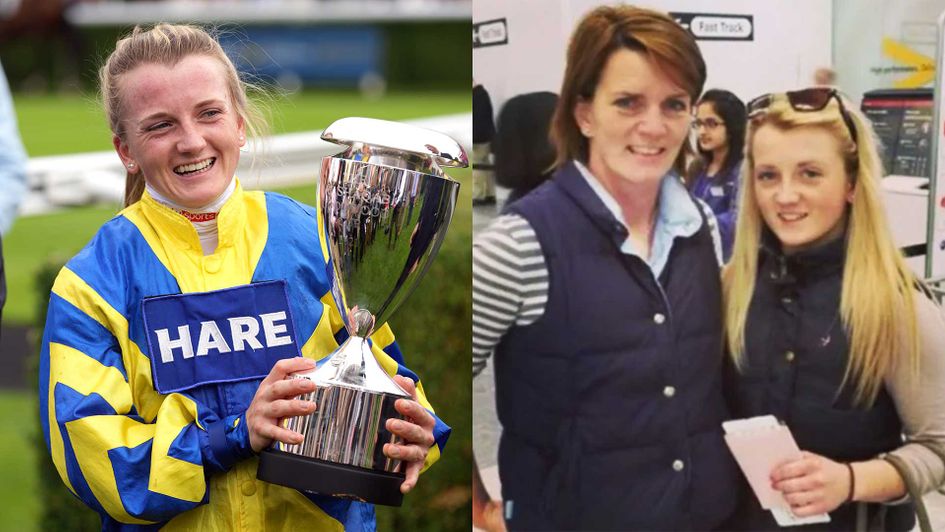 Hollie Doyle and her mother Caroline

Hollie Doyle has revealed how her mother Caroline watched her emotional victory on Trueshan at Glorious Goodwood less than an hour after a breast cancer operation.

The trailblazing jockey, who has just racked up 150 winners for the second successive year, was the first sporting star to be featured in ITV4's new documentary 'Against All Odds' on Tuesday night - on which she explained the heartbreaking family circumstances behind one of her many landmark triumphs.

Just three weeks after the highs of achieving a second career Royal Ascot win on Amtiyaz back in June, Doyle's mum was diagnosed with breast cancer and was subsequently booked in for an operation on July 27.

That was the same day the 25-year-old was due to ride superstar Trueshan in the Al Shaqab Goodwood Cup.

Caroline Doyle said: "Hol rang me in the morning or the night before, saying, ‘I should be with you’. I said there's nothing you can do and I said all I want you to do… 'I want to wake up and know that you've won on Trueshan'."

Doyle said: "I just felt really bad, I just felt like such a bad person that I couldn’t be there with her. It was probably the first time in my life I felt a bit of pressure. Usually I’m quite relaxed. Maybe I'm good at covering things up.

"But we were all very worried. It’s your worst nightmare. I wanted my mum to wake up and feel good, feel happy, to give her something to be happy about."

On the day itself, Caroline came out of theatre about half an hour before the big race and managed to watch her daughter claim her second ever Group One triumph on her phone.

She said: "It was getting later and later in the day and I kept thinking, ‘when are they going to take me in?’ Anyway, eventually I came out of the theatre and I looked at the clock and it was 3 o'clock.

"I said to the nurse, 'my daughter's riding at 3.35 in a big race, is there any chance I can be back at the ward by then?’ He said, 'I'll do everything I can to get you there'. Well, I went to the ward like I was in a rally car in the bed! I got there just in time, it was about half past. I got my phone and set it up just in time to watch it."

🏇🏆 No stopping Trueshan, as he gallops his rivals into submission at @Goodwood_Races, to strike gold in the Goodwood Cup!

🙌 It's another Group 1 prize landed by @HollieDoyle1!#GloriousGoodwoodpic.twitter.com/Xr7PNpiofK

Doyle would win another two races on the same card for a stunning 123/1 treble and her dad Mark recalled: "It was like a blur. To see her be so professional when there was a lot going on. Two trump cards came at once - Hollie riding the Group 1 and Caroline getting the all clear from the operation.

"Whatever she achieves in her career, that day will mean so much to me because it’s made me realise there’s more to life. Look how happy we are and what we've got. I was sat in the house watching it on tele, rolling round on the floor bawling my eyes out.

"She doesn’t do dismounts, she doesn't do fist punching or any of that, she just did it for her little mum.

Doyle teamed up again with Trueshan this month to claim a Champions Day victory for the second season in a row having done so on Glen Shiel 12 months ago when clinching her first career Group One in the Champions Sprint Stakes.

🏇🙌 Some way to kick off Champions Day!

🏆 TRUESHAN retains his crown in the QIPCO British Champions Long Distance Cup at @Ascot, showing a brilliant attitude to land the prize again under @HollieDoyle1!pic.twitter.com/j6k4CErunj