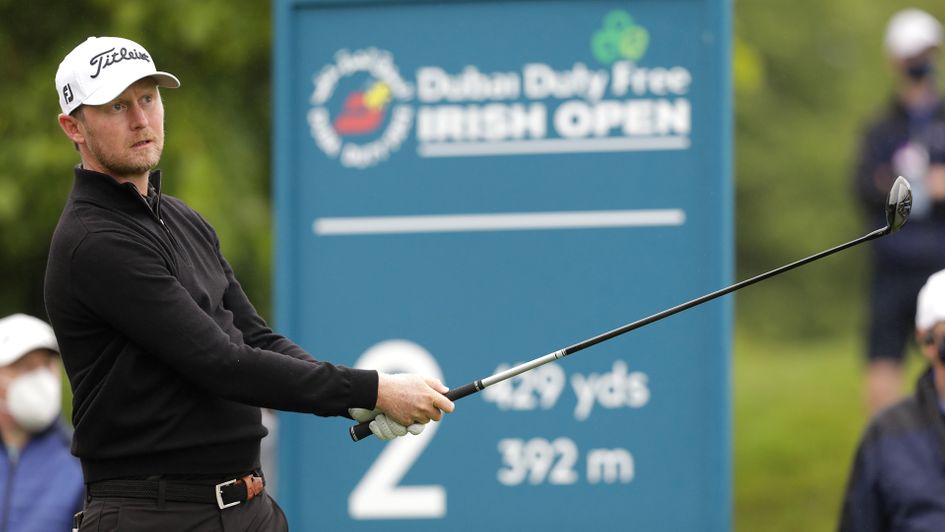 Justin Harding in action at the Irish Open

Lucas Herbert has a narrow lead going into the final day of the Irish Open - Jason Daniels has a winner, two-ball, top 10 and top 5 finishes to consider.

It's doubtful that when Tiger and Ernie (no surnames needed, surely?) shared the two runnings of the WGC Amex held at Mount Juliet in 2002 and 2004, they would have thought of the significant form link they were about to cement. The two then went to a playoff over three holes at the 2006 Dubai Desert Classic, a leaderboard that contained such legends as Retief Goosen and Darren Clarke, both prominent two and four years previous.

Fast-forward 17 years and the halfway leaderboard contained leader Lucas Herbert and joint top-5 Christiaan Bezuidenhout who both played out a two-hole playoff at the Emirates in 2020. Perhaps it's something, perhaps nothing, but select the boards and up pops the names Justin Harding, Jason Scrivener and Herbert again, the other two also playing well thus far this week.

The Irish Open has not seen a third-round leader convert since Jon Rahm in 2017, with winners coming from 5th, 8th and 9th place since, and today's early rounds suggest that those starting from just off the pace will give many in-running punters a genuine chance.

Despite looking hard to beat for the first 54-odd holes, the current leader has to be avoided at around 11/10.

Much about the 25-year old's form suggested he would play this week, with that Dubai win backed up with form alongside desert and Portugal expert Tom Lewis (ironically playing very well over on the PGA tour this week), Crans (yup, Els, Bjorn, Garcia et al) and the various parkland courses used for the British Masters. Much of that is surpassed by recent back-to-back top-20s on the PGA tour at 'proper' tournaments and he is carrying a lot of belief, commenting that he will "be taking a lot of experience from that (victory) into the weekend and try and draw on that confidence as well."

As the only player in the top-10 at halfway of both tee-to-green and putting gains, he rightfully sat on top at halfway and it was only during today's back-nine that he dropped that level.

An excellent approach shot on his first today led to a missed chance but he was right back on the second, an iron off the tee leading to a kick-in birdie from just over three feet. Of course he then plays over-cautiously a couple of holes later, leaving himself a tough long chip to just remind us golf isn't easy - but holes the par putt from ten feet. At times it looked as if we were facing a 'without Herbert' market but then came the back-nine.

From then on the Australian seemed to find it all a bit of a struggle, losing a couple of shots to his nearest rivals, plenty on the greens and stumbling around with much of his game. He was mentally strong during his sole victory but he will know he should have been probably three ahead overnight and playing with a non-winner won't help.

Johannes Veerman took advantage of the lockdown period last year, recording three top 10s and a further trio of top-20s including in Qatar and, maybe significantly, at the Kenya Open after which he lost his form completely. Seeming to have eagle and birdie putts at all early holes today until simply holding on from 14 onwards, this will be a big event to break your European Tour maiden. The one-time winner, at a lower level, has to be overlooked, looking very nervous coming home despite fighting to save par a couple of times.

Teeing off just in front of those two, Kenya Open winner JUSTIN HARDING has to be the main play, just three behind after a seven-under 65 today, including two bogeys.

Click here to back Justin Harding with Sky Bet!

Winner in Qatar in 2019 (from Bezuidenhout), third at tree-lined Valderrama and at Close House, the South African also boasts a top 10 at the Emirates and a most recent tied-fifth in Germany at the BMW International, a finish that should have been better save a poor final nine holes, including a water ball on the par-five 72nd.

I can forgive his drop from the lead when trying to follow up his Karen victory at the Savannah Open as his play through the first three rounds was exemplary, and with tomorrow's front two potentially getting in each other's way, Harding can go very close to landing his third European Tour title.

His tee-to-green figures have improved from 90th on Thursday to first today, his controversial putter ranks second today and his around the green to third - a lethal combination if this is repeated on payday.

Hugely experienced Andy Sullivan is known for low rounds - 61 at the golf in Dubai and a furlong victory at Hanbury Manor previously the most glaring - but he was very poor through the beginning of his round, with wayward driving saved only by some excellent recovery play.

His wild miss at the par-three third hole was a horror show saved by a high-class eagle at the fifth but he returned to the wild at the next, a par three. Something there looks wrong, he looked very frustrated through his final holes today, his tee-to-green figure is getting worse as the week goes on, his putting was shocking today and he is opposed not only in the outright market but in his two-ball tomorrow.

There is plenty to take note of with an eye on next week, many that are now only five or six shots off the pace. Top of that list is Sullivan's opponent tomorrow and one of Ben Coley's pre-event picks, AARON RAI.

Click here to back Aaron Rai for a top-5 finish with Sky Bet!

Last year's Scottish Open champion perhaps should have won this event last year at Galgorm Castle but was impressive all-round when finally getting home at the Renaissance Club. Like Harding, he is a winner in Kenya though at the 'opposite' course and whilst he has generally had a very strong short-game has let that slip recently, leading to top-30 finishes instead of taking advantage of decent approach play.

Rai ranked top 10 for tee-to-green at the Scandinavian Mixed last time and this week has improved that figure from a rank of 50, 118 and now in the top 10. Putting has also improved as he has gone on, finding a couple of shots on the field over Friday and today but it's his impressive scorecard that seals the deal.

Not one that will ever destroy par-fives, Two-Gloves has 13 birdies this week, answered only by two double-bogeys at the 18th on his first two days. It's an impressively clean looking card and he will need to keep that going but whilst other more swashbuckling types will invariably find themselves mixing plus figures with short game struggles, Rai's efficient approach can see him beat Sulli and grab a place on the front page.

I took a close look at Dale Whitnell, a brilliant short-game exponent who will be hoping that the rain and wind arrives, and at Andrew Johnston who has spells of form and will be relishing these trio of Opens. Both make some each-way appeal but are hard to get over the line.

ANTOINE ROZNER will have given his trackers a few moments of heartbreak today, no doubt cursing every missed birdie putt. Having backed him in-running, I can vouch for that frustration and no doubt the final water-ball off the tee at 18 was part of his own annoyance.

The two-time winner seems to be taking his time getting over a spell on the PGA Tour, three missed-cuts followed by a tied-18th (with Herbert et al) but he was far better today than the final 71, giving himself genuine birdie chances on at least six of his eventual parred holes. Final rounds of 64 in Dubai and 67 in Qatar sandwiched a top 10 at the Dubai Desert Classic and he will be keen to start making his way back to the world's top 50, having drifted away from a mid-60 ranking.

Rozner's tee-to-green play this week has been superb, ranking top-20 for all three days and his two-ball with fellow supreme ball-striker Sean Crocker will be a fun watch - they could easily inspire some top class iron play, certainly enough to see the Frenchman finish in the top-10.