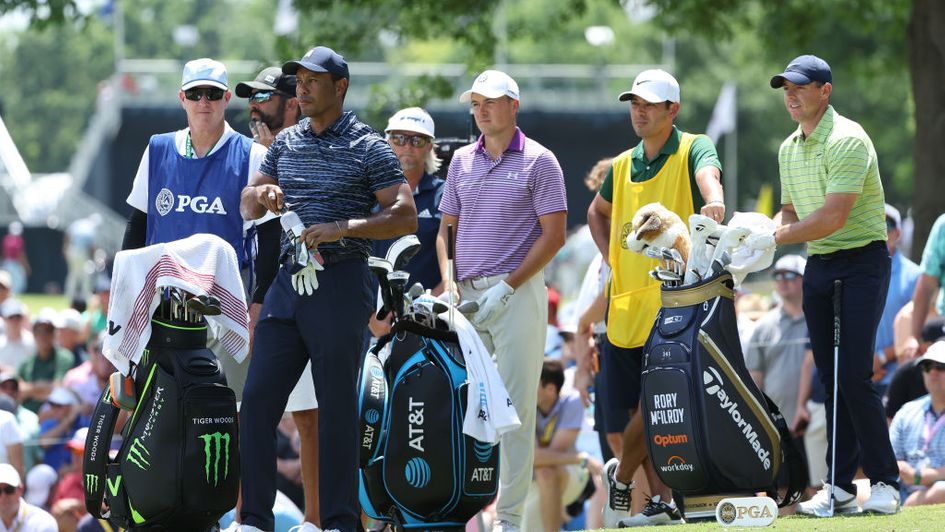 Jordan Spieth can star in the marquee three-ball

Ben Coley bagged 28/1 and 8/1 winners on day one of the PGA Championship, and now returns with another three-ball treble for Friday afternoon.

Can Rory McIlroy make all?

At the height of his powers, McIlroy topping the leaderboard after round one would've meant prices shorter than 3/1 to win the tournament. His first European Tour win saw him lead after rounds one, two and three, and when he captured his first major, three shots after day one became six after day two, eight after day three, and a Sunday victory parade. When he added the Open three years later, it was his second all-the-way major win. All four of them have seen him lead after round three.

Hence in Wednesday's round one preview, there was some discussion as to whether to back him in those markets – to lead after round one and win, or to lead after all four rounds. I felt 66/1 was very short in the former market and so it has proved, with those who wish to reinvest their 28/1 winnings effectively getting about 110/1. Still, it turns out Paddy Power and Betfair dangled 100s and I will admit to regret having failed to board that boat.

The wire-to-wire win was around 150/1 and that's now a 6/1 shot with Sky Bet and again it's probably reasonable to suggest punters would be better taking bet365's 2/1 about McIlroy leading after two rounds and then reinvesting. If he's to go odds-on through 36 holes, which he'd need to for the 6/1 to look good business, he'll need plenty to go right in addition to another sub-70 round of his own.

Rory McIlroy: 65, his lowest opening round score in a major since the 2011 U.S. Open at Congressional.

McIlroy does have every opportunity to press on, thanks to both his own brilliance and a good draw. Those playing late on day one were only a stroke worse off but the gap could widen, with strong winds forecast to meet this half when they return on Friday morning. If those winds die down as suggested, McIlroy might still be in the lead when he puts his tee peg in the ground. Although Justin Thomas is understandably priced as his biggest danger, it may come from Will Zalatoris, Cameron Smith and Xander Schauffele.

Whatever the case, as Southern Hills firms up he shouldn't have to shoot much lower than 70 to remain in front and there's definitely a decent chance he goes on to win this tournament having been in command from the end of his front-nine on Thursday. There's even some overnight rain expected, music to McIlroy's ears ahead of the weekend.

That said, though slow starts in majors had become a problem, let's not kid ourselves into believing that was the only thing McIlroy needed to correct. He's still got questions to answer, and it's eight years since he converted a first-round lead to victory, just as it's eight years since he won a major. He'll have no bigger supporter than me, but I can let him go at 3/1.

Indeed with the course set to toughen up and certainly no guarantee McIlroy putts as well, there's enough value in backing JORDAN SPIETH to take his turn in the spotlight in the marquee three-ball (1936 BST) which is completed by an ailing Tiger Woods.

Spieth fought hard to shoot 72 yesterday and just about remain in the conversation, and anyone watching will know he didn't do a lot wrong. Not for the first time this spring, his putting was an issue throughout but there was some bad luck, too, as drives which landed in the fairway but came to rest an inch into the rough cost him strokes at the 15th and 18th holes.

It was just one of those days, where small misses were magnified and I dare say some frustration grew as McIlroy made things look easy. Spieth will have been really pleased with how he stuck to the task, coming home in level par, and there's less between him and McIlroy than revised prices suggest.

With Woods plainly struggling for fitness and unable to cover the deficit around the green, this should be a head-to-head and anything 6/4 or bigger about Spieth is worth a small bet. McIlroy did drive the ball fabulously and isn't a player I'd have been in a rush to take on, but the combination of Woods' troubles and the way Spieth's round unfolded has added enough to the price.

From the first round of the PGA Championship, I wrote about Rory McIlroy and Tiger Woods, and what a walk means on a day like this and what it doesn't. https://t.co/vigVqMVWKO

Things went to plan with yesterday's three-ball treble, which saw our trio all win by three or more shots. Going in again might tempt some but the price on Min Woo Lee, Justin Harding and Aaron Wise is lower than 5/1 from 8/1 with several firms, and I'd caution that these forecast winds for the morning add some unwanted volatility.

I'd rather focus on the afternoon where LANTO GRIFFIN and YE YANG combine for a 3/1 double.

Griffin (2042) has been hitting the ball superbly of late and that continued in an opening 72. He made very little despite several good chances courtesy of quality approach play, yet was still able to match Laurie Canter's score as the pair proved six shots too good for PGA pro Dylan Newman, who outperformed both of them on the greens.

Canter, who isn't known for his short-game, was fully three shots better than Griffin on and around the greens, underlining the superiority in the American's long-game. Whereas there's a good chance that remains – Griffin is among the best ball-strikers on the PGA Tour over the last two months – it's even more likely that there's a turnaround on and around the greens, and 10/11 about Griffin in what amounts to a match looks the best bet of the evening.

Slightly more risk comes attached to backing 50-year-old Yang (1825), but he hit the ball really well to outshine John Daly and Shaun Micheel. Daly birdied the first and was excellent for a while, but bogeyed four of his final five holes in a likely sign of what's to come. He's been given permission to ride a cart this week due to health problems but this remains a physical test for him and late on Friday afternoon, it's also possible he grows frustrated with the pace of play. That wasn't an issue in the first group out but it just might be today.

Micheel was always behind and lacks the competitive sharpness of Yang, the youngest and fittest of this trio. Yang has finished ahead of Daly in five of their six combined starts since this tournament last year and the one shot gap between them ought to widen, with something around the 75 mark from the 2009 champion likely to set the bar too high for both his playing partners.

Those looking for a treble should consider Stewart Cink, who beat Padraig Harrington and Jason Dufner to continue a strong run of form. My worry there is that Harrington is highly unlikely to struggle as badly as he did with the putter and there's not as much between them as their respective first-round scores suggest. Kevin Na's short-game could again be the difference in his three-ball but evens is short enough against two solid operators so we'll stick to a double at a nice price.