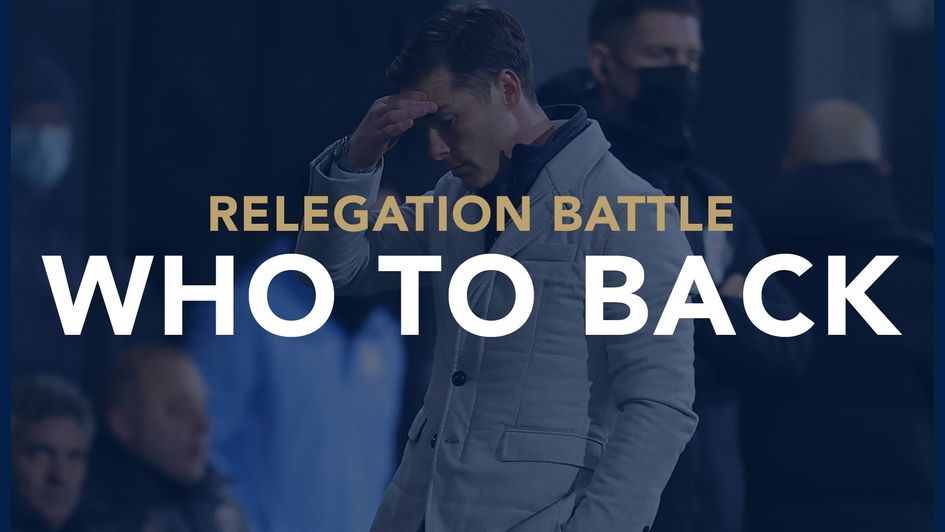 Will Fulham go down this season?

The Premier League relegation battle had been hotly contested up until fairly recently, but now it is looking increasingly like one of Newcastle and Fulham who will join West Brom and Sheffield United in the 2021/22 Sky Bet Championship.

The Blades, who recently parted ways with long-time manager Chris Wilder, are 14 points from safety with nine games remaining, while West Brom are only four points better off.

Sky Bet aren’t even offering odds about the pair being relegated, so certain are they of their impending doom.

With just nine games left of the season, Brighton, Burnley and Southampton have put distance between themselves and the bottom three, with all three now enormous prices to go down.

I have been banging the drum for Graham Potter and Brighton all season, and for most of last as well - they are in a hugely false position.

While they sit fifth-bottom of the Premier League table, they actually occupy a top six berth in Infogol’s expected goals (xG) table, showing that performances have been very strong despite results suggesting otherwise.

Only seven teams boast a better attack than the Seagulls this season according to xG, while only Manchester City (0.84 xGA per game) and Chelsea (0.90) have been better defensively than Graham Potter’s side (1.09).

Recent wins over Southampton and Newcastle – two teams in the bottom seven – were much-needed to stop a six-game skid, but of the five teams above the bottom two, Infogol calculates that Brighton will collect the most points (12).

Could Southampton be relegated?

Despite being top of the table at the start of November, Southampton’s recent free-fall means that they should be looking over their shoulders nervously.

Sky Bet quotes of 50/1 about the Saints dropping into the Championship imply that they have a 2% chance of relegation, but their recent run of one win and one draw in their last 12 does have alarm bells ringing.

The question is, can Newcastle and Fulham catch them?

The Cottagers are seven points behind them having played a game fewer, so it does seem unlikely, and Southampton’s next three fixtures, a trip to West Brom sandwiched by home games against Burnley and Palace, represent a great opportunity to put the relegation talk to bed.

Though they do have attacking issues, both process-wise and with the absence of Danny Ings, Southampton should pick up enough points to survive. 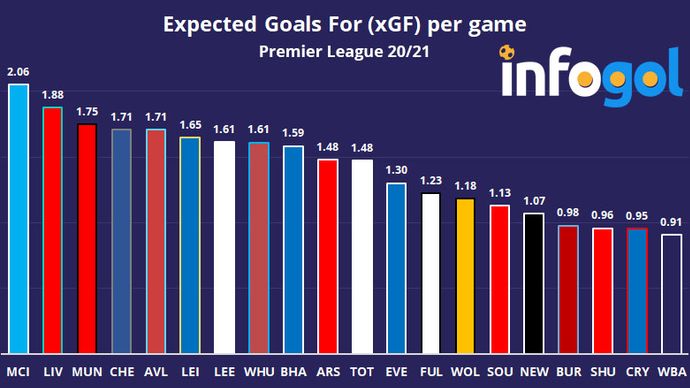 Will Burnley do enough to survive?

Burnley, currently on 33 points, are on a three-game unbeaten run having played Leicester, Arsenal and Everton, which is impressive in itself.

The Clarets were very slow to get going this season, but the resolute nature of Sean Dyche’s side soon kicked in, and they have ascended the table ever since, pulling clear of the drop zone. 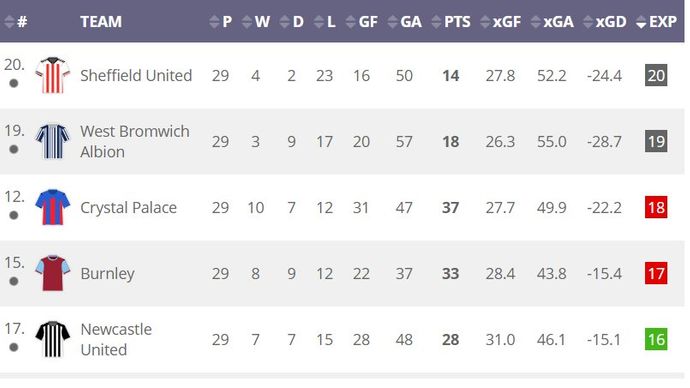 Based on Infogol’s expected goals table, Burnley should occupy 17th spot, so have been fortunate to some extent this season, but again, it is unlikely that Fulham and Newcastle catch the Clarets.

They still have to play three of the current bottom four, so will fancy their chances of keeping the relegation zone at arms-length, with Infogol forecasting that they finish in their current 15th spot.

Are Newcastle rightly 8/11 favourites for relegation?

Newcastle’s recent plight has been well documented, and with pressure piling on Steve Bruce after a run of two wins in 18 league games, Mike Ashley’s recent vote of confidence in his manager took many by surprise.

The Magpies are two points clear of Fulham with a game in hand, but so bad have their recent performances been that the bookies have priced them up as 8/11 favourites to finish in the bottom three.

A downturn in results was expected given their concerning underlying numbers last season, where despite finishing 13th in the Premier League, they propped up Infogol’s xG table.

Their expected goals process hasn’t improved, which is why they are in a relegation battle this season, and recent injuries to key attacking personnel haven’t helped their cause.

However, looking at their remaining schedule, it is more favourable than Fulham’s - then there is the two-point advantage and game in hand, too.

On average, Infogol model forecasts Newcastle to pick up eight expected points from their remaining nine matches, which would see their most likely final points tally stand at 36.

Fulham would then need 10 points from their remaining eight games in order to survive, as they currently have a better goal difference. 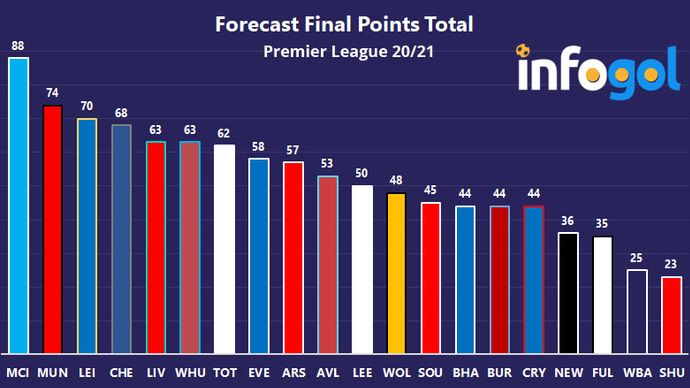 What could be key for Newcastle is the return from injury of key attacking players Callum Wilson and Allan Saint-Maximin – Wilson in particular.

The striker is Newcastle’s top scorer with 10 goals, but before his lay-off he was consistently getting in to scoring positions like no other player in Steve Bruce’s side, shown by him averaging 0.56 xG/95, which is among the league's best.

Fulham are the value in the relegation market

Scott Parker’s side have been much better than their relegation rivals for a long while now, but have drawn too many games during a period when they were difficult to beat.

They have won just one of their last five, losing three of those, with it being their home form that could well cost them by the end of the season.

Fulham have the worst home record in the Premier League, winning just two of 16 and losing 10. Fortunately for the Cottagers, only three of their remaining eight games are at Craven Cottage.

Unfortunately, though, their remaining away matches are difficult.

They must go to Aston Villa, Arsenal, Chelsea, Southampton and Manchester United, where Infogol calculates they will collect on average four points.

That means their home games could be the key to their survival, with two of them being against teams in the bottom seven, and their final game of the season potentially being one of the biggest final-day games in recent history – as they host Newcastle.

That match could literally be winner stays up, which would be fantastic entertainment for the neutral. 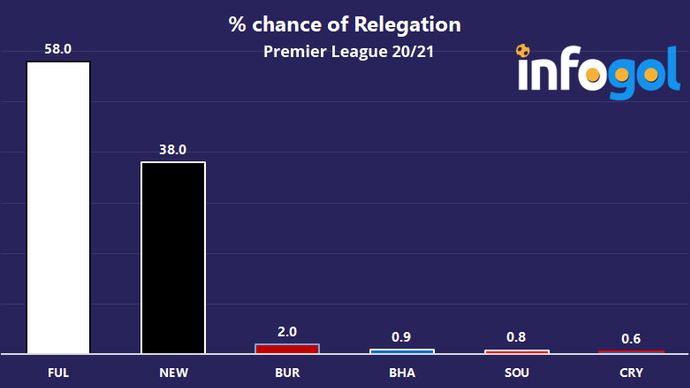 % chance of relegation from Premier League | 20/21

However, at this stage, the Infogol model calculates a 58% chance of Fulham succumbing to relegation, which implies odds of around 7/10.

It means the Cottagers are value to join West Brom and Sheffield United in the second tier, as Sky Bet are currently offering 11/10.