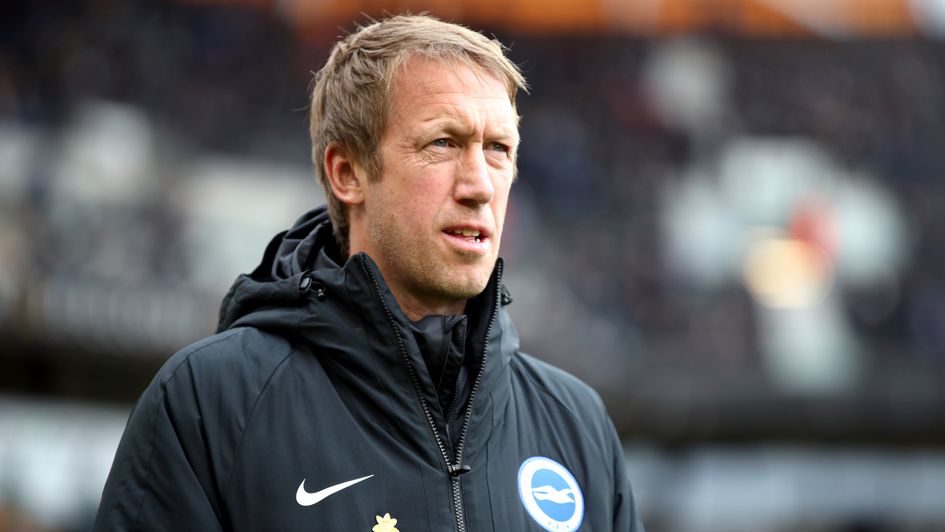 Just how unlucky have Brighton been this season?

Just how unlucky are Brighton? Expected goals analysis of Graham Potter's side

This article was published before Saturday's 1-0 defeat to West Brom.

After Newcastle lost to Chelsea in the Monday Night Football on February 15, Gary Neville said the same negativity and concern prevalent in discussions on Steve Bruce’s side should also be applied to Brighton.

While a glance at the Premier League table would deem Neville as correct, with the Seagulls just a point above Newcastle and four above the relegation zone, his assumption that the two sides are in the same predicament is wrong.

Bruce's team are rightly in a relegation battle, with performances over the course of the season ranking them 17th in the Infogol expected goals (xG) table.

Brighton should be challenging for European football according to the same metric.

So after finishing 15th last season, why do they find themselves so close to the drop zone yet again?

Why are Brighton so unlucky, especially at home?

Anyone who watched this week’s Monday Night Football will likely be asking themselves how on Earth Brighton failed to win.

Crystal Palace played out the ultimate smash-and-grab, netting a completely undeserved winner deep into stoppage time with just their third shot of the game (0.27 xG).

Albion were the aggressors. On the front foot, playing nice football - but it wasn’t all style and no substance at the Amex. They racked up a whopping 3.03 expected goals for (xGF) from 25 shots.

Based on the quality of chances created by both teams, we would expect Brighton to win that game 91% of the time; Palace - 2%.

Unfortunately for Graham Potter, this isn’t a one-off.

In fact, near enough the same thing happened in their previous home game against Aston Villa, where the Seagulls racked up 2.44 xGF and allowed just 0.14 expected goals against (xGA) but were held to a 0-0 draw.

On that occasion, Brighton would be expected to win 88% of the time; the draw comes out at 11%. 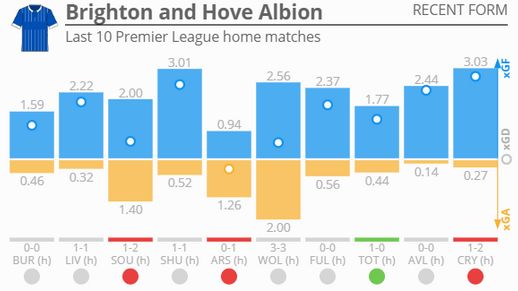 The bad luck goes even further than two games though.

Brighton have won just one of 13 home games this season, posting a goal difference of -5.

And yet Potter’s side have won the xG battle in 11 of those fixtures, with only Chelsea and Arsenal besting them on their own turf.

What is expected points (xP)?

Perhaps unsurprisingly, then, Brighton ought to have lots more points.

But for Albion, a team mired in relegation trouble, to have racked up more expected points (xP) than any other team in the Premier League is some achievement. 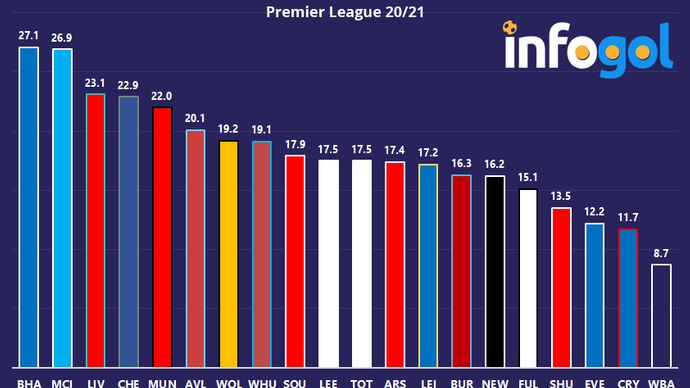 The reality Potter and his men are left with is that they have put just 10 home points on the board.

We calculate that there was just a 0.03% chance of Brighton winning 10 points or fewer based on performances in home matches.

Do Brighton miss a lot of chances?

Based on chances created, Brighton should have scored close to 27 (26.9 xGF) goals at home, but have managed just 12 – a staggering underperformance.

Overall, their expected goal difference (xGD) of +15.8 is nearly 21 better than their actual goal difference - only Manchester City can boast a better xG process in home matches than the Seagulls.

Brighton underscored by seven last season at the Amex, so in 32 home games under Graham Potter, they have scored 32 goals from chances equating to 54.0 xGF.

While the premise of xG is that, essentially, results will ultimately match Albion's performances, the longevity of underperformance is a huge concern.

Are they quite simply a wasteful team?

Neal Maupay has started 19 of 25 league games this term, but he is a serial underperformer.

The Frenchman undoubtedly brings a lot to Brighton’s general play, but when it comes to finishing chances, he is extremely underwhelming.

In his four seasons in English football, two in the Sky Bet Championship at Brentford, Maupay has scored 54 goals from chances equating to 64.3 xG. He has only ever equalled or exceeded his xG once, back in 2018/19.

Since making the step up to the Premier League with Brighton he has left around nine goals out on the pitch (17 goals, 25.8 xG). 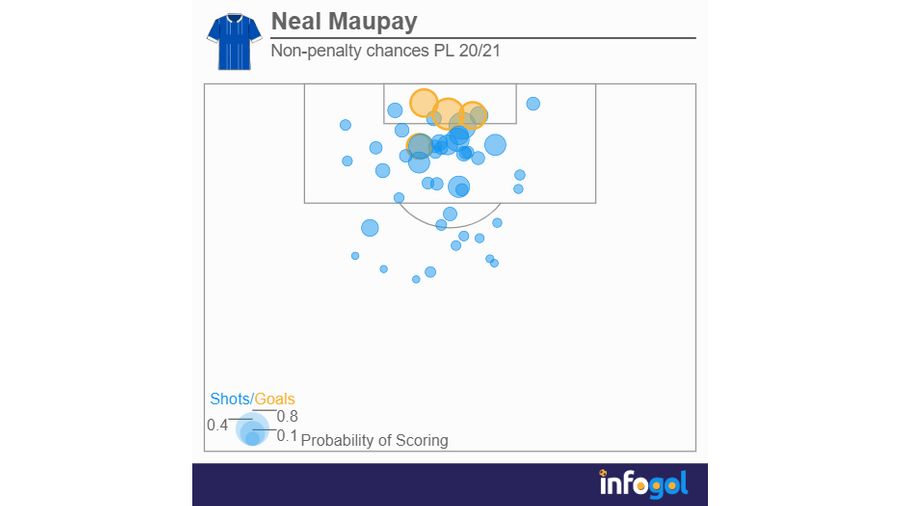 Maupay obviously does half the job by getting in the right scoring areas, which is why he is rated so highly by xG models, but converting the chances is an issue.

Brighton chose not to upgrade in the summer or January, but they definitely should in the next window.

In Maupay's defence, it isn’t just him that is underperforming in front of goal.

Graham Potter would thrive at a better team

Having led Swedish minnows Ostersunds from the fourth tier to the Europa League, Graham Potter got a move to recently relegated Sky Bet Championship side Swansea in 2019.

He set the foundation for which his successor, Steve Cooper, is reaping the rewards. The Swans finished 10th in Potter's sole season in charge, despite selling pretty much all of their best players.

They also ranked as the fifth-best team according to xP.

Cooper was given the resources to bring in some quality players, and the Swans made the play-offs. Once again they are pushing for promotion this term. 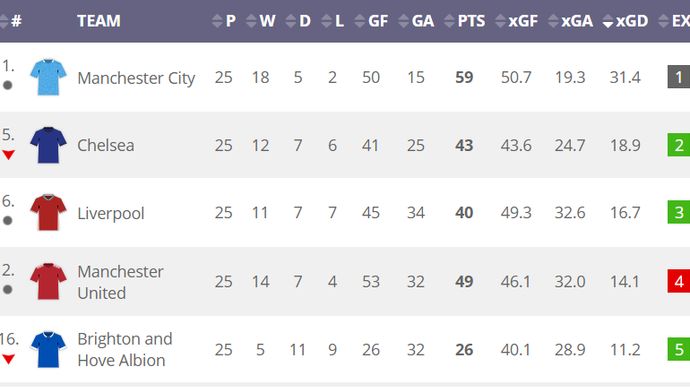 Since moving to Brighton, Potter has transformed the Seagulls into a team whose performances warrant a place in the top six.

This season, only Manchester City, Chelsea, Liverpool and Manchester United have a better xG process.

They are the data darlings of the Premier League, and that is solely down to Potter’s magic.

If the Seagulls invest and improve in the summer, and keep hold of Potter, then there is no reason why they can't push for a place, at the very least, in the top half.

At the moment, Graham Potter is too good for Brighton. He needs better players.

If he doesn't get them, he needs a better club.