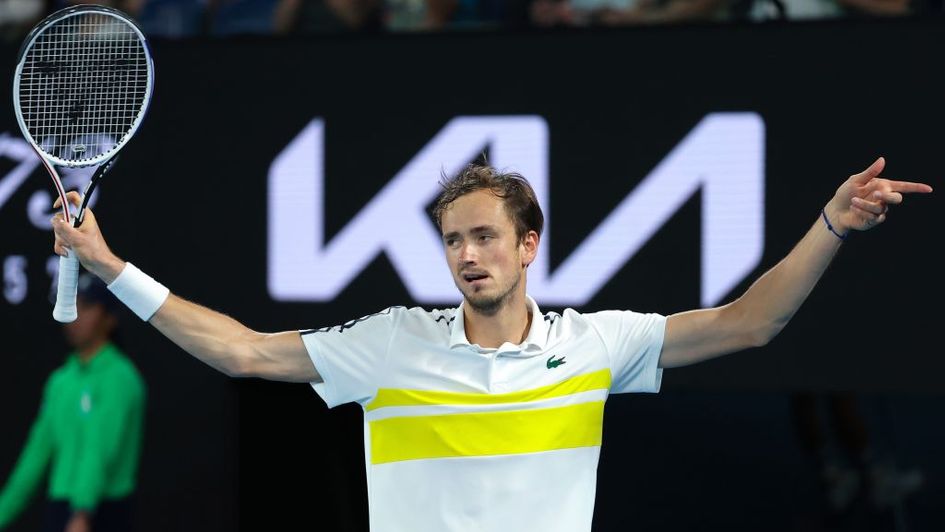 Our man Andy Schooler has two bets for the US Open men's singles and Daniil Medvedev is his headline selection.

Fans of Roger Federer and Rafael Nadal won’t want to hear it but for most of the past decade, Novak Djokovic has been the dominant force in men’s tennis.

It’s pretty much undeniable he’s been the best hardcourt player and the 2021 US Open sees the Serb go off odds-on for another success.

But things will be a little different for Djokovic in New York this year. He’s never faced a situation such as this – and may never again.

Having already triumphed at the Australian Open, French Open and Wimbledon, the 34-year-old goes into the tournament knowing victory would see him complete the calendar-year Grand Slam – a feat not achieved in the men’s game since Rod Laver did so in 1969.

In addition, the US Open also represents Djokovic’s first chance to claim another piece of history. Victory at Wimbledon was his 20th Grand Slam title; another here would set a new record and take him one clear of his great rivals, Federer and Nadal.

Why is Novak Djokovic vulnerable?

It’s potentially a big burden to carry and anyone who thinks otherwise should remember what the weight of expectation did to Serena Williams in her equivalent chase in 2015. It looked like nothing could stop her until she crumbled from a set up against Italian veteran Roberta Vinci in the semi-finals.

Admittedly, Djokovic is in a slightly different position – opponents will need to win three sets against him, not two – but there are reasons other than mental ones to swerve the Serb.

The last we saw of him was in Tokyo where his bid for Olympic gold ended somewhat spectacularly – another reminder of how defeats can emerge from over the horizon rather unseen.

A set and a break up on Alex Zverev in the semi-finals, Djokovic was unable to respond as the German lifted his level. He even missed out on a medal altogether, losing to Pablo Carreno Busta in the bronze-medal match.

Given how fiercely patriotic he is, the injury must have been a serious concern and his decision surely made very much with this tournament in mind.

He skipped the warm-up events in Toronto and Cincinnati so comes in with questions about his fitness unanswered and certainly it’s far from ideal that, unlike all of his main title rivals, he’s not played on the North American hardcourts in the build-up to the US Open.

Conditions here will be a lot faster than those he played in at the Olympics.

Given all these factors, there’s no way I’m backing Djokovic at a general 4/6, even though we all know that if he is fully fit and plays close to his best level, he’ll very likely win and write those new chapters of tennis history.

Immediately behind Djokovic in the market are three players who all hold decent claims but also have the same cloud of doubt hanging over them.

Who is the best bet at the US Open?

DANIIL MEDVEDEV, Stefanos Tsitsipas and Zverev are all still without a Grand Slam title to their name, although at least all have now experienced a Grand Slam final.

Clearly that’s a mental hurdle that will need to be overcome but the trio will largely be happy with their form coming into New York and ready to take advantage of any slips by the hot favourite.

Tsitsipas made the semi-finals in both Toronto and Cincinnati, losing narrowly at both events.

He really should have beaten Zverev in the latter having led by a double-break in the deciding set. The week before in Toronto, the Greek lost from a set up as Reilly Opelka’s big serve got under his skin.

His ability to return against the big servers is seen as a bit of a weakness, while many have also highlighted a backhand deficiency in fast conditions – and we’re going to see those again this year in New York.

Last year’s behind-closed-doors event was the first to be played on Laykold courts and they were quicker than their DecoTurf predecessors.

Such conditions will aid Zverev’s serve but I’m not so sure about the other aspects of his game.

That said, he won on Laykold in Cincinnati recently, backing up his gold medal from the Olympics. Essentially, his form is better than anyone’s over the past month.

You’d be tempted to say the 2020 runner-up’s preparation has been ideal but that would be far from the truth.

Instead, he spent Friday’s media day denying allegations made about his private life and issuing statements about ongoing legal action.

The awkward questions won’t be going away any time soon and with a tricky draw thrown in, Zverev looks to have plenty on his plate.

Sam Querrey and his big serve will be no pushover in round one and the same can be said about Alexander Bublik – the pair are seeded to meet in round three.

Jannik Sinner and Denis Shapovalov are others he’ll need to beat to reach the semis, if the seedings play out.

Zverev has rarely done things the easy way at the Slams and that path through the draw could be his undoing.

Only twice in 24 Grand Slam tournaments has Zverev reached the last 16 without dropping a set, with five-set matches peppering his record.

He’s already played 23 of them at Grand Slam level with four in his last two visits to New York alone.

The heat and humidity can be a major factor in the Big Apple so using energy wisely can be crucial. Therefore, despite his impressive results of plate, I’m happy to leave Zverev alone on this occasion.

Why Daniil Madvedev is the bet

Instead, Medvedev is the man I want to back.

Having won in Toronto and then made the semis in Cincinnati, the Russian appears to be finding some of his best form at just the right time.

The Russian could easily have completed the rarely-achieved Canada-Cincy double but for a collision with an on-court camera in Ohio. He’d been in charge against Andrey Rublev until that incident.

Not your every day occurrence, as Daniil Medvedev collides with a camera in Cincinnati#CincyTennis pic.twitter.com/BSK51FyyiI

Still, he’ll have largely been pleased with his preparation and he’s not a player who will be fazed by the quick courts. In fact, he could well relish such conditions.

His natural ability to mix-and-match his shots make him, for me, the best player of the chasing pack right now – Medvedev has plenty of ways to win if his A-game isn’t firing.

The world number two almost won this title two years ago, losing to Nadal in five sets, while earlier this year he also made the final in Australia where Djokovic proved too good.

That means he’s made the final of two of the last four hardcourt Slams – the same as Djokovic – and he’s long proved his ability to beat the world’s best players.

There was plenty of evidence of that on show at last year’s ATP Finals, another big hardcourt event and one Medvedev won.

Djokovic was among his victims that week and even though he gained revenge in Melbourne, Medvedev has still won three of their last five matches, including on the US hardcourts in Cincinnati in 2019.

As second seed, Medvedev is in the bottom quarter where the next-highest seed is Casper Ruud, a player best suited to clay and undoubtedly the weakest of the top-eight seeds on this surface.

There’s a lot to like about Medvedev’s chances and a price around 4/1 looks perfectly acceptable.

In these Grand Slam previews over the years I’ve often picked out some quarter bets or a real long shot.

However, for the 2021 US Open, I’m not taken by a lot and I certainly wouldn’t be surprised were the semi-finalists to be the top four seeds.

Who is the best outsider at the US Open?

In terms of long shots, men’s tennis hasn’t had too many such winners at this level in recent years.

The dominance of Djokovic, Nadal and, to a lesser extent, Federer, has ensured most champions have been sent off pretty short.

There have been odd exceptions but you have to go back to San Wawrinka at the 2015 French Open to find anyone winning at over 20/1.

He served beautifully and crushed his forehand spectacularly in the closing stages of that event and if anyone if to emulate him seven years on, perhaps it could be HUBERT HURKACZ.

The Pole produced the best Grand Slam run of his career at Wimbledon where he beat Federer en route to the last four.

He shown a propensity for the North American hardcourts having started his season by winning in Delray Beach and then capturing his first Masters 1000 title (on Laykold) at the Miami Open in April.

More recently his results may not have been so eyecatching but they’ve still been solid with narrow losses suffered in both Toronto and Cincinnati.

In the former, Hurkacz should really have beaten eventual champ Medvedev but lost in a final-set tie-break, while in Cincinnati he also lost two breakers in defeat to Pablo Carreno Busta.

Admittedly, the 24-year-old is yet to go beyond the second round at the US Open but the fast courts should play to his strengths with a strong serve likely to prove a major weapon.

He’s drawn in the Djokovic quarter so we’ll looking for an upset from someone, maybe Hurkacz himself, along the line.

But the Pole or Matteo Berrettini both have the sort of game that, if they stay at top level for a couple of hours, could really trouble the Serb in these conditions.

For all his Grand Slam success in 2021, it should be remembered Djokovic has had some odd moments this season.

At the French Open he had to come from two sets down to beat both Lorenzo Musetti and Tsitsipas, while on the regular tour he’s lost matches to Dan Evans and Aslan Karatsev.

He does have bad days.

I considered Berrettini at 40s but the Italian hasn’t played much of late due to injury.

He may play himself into the tournament here but my preference if for Hurkacz, given there’s not a lot wrong with his form right now.