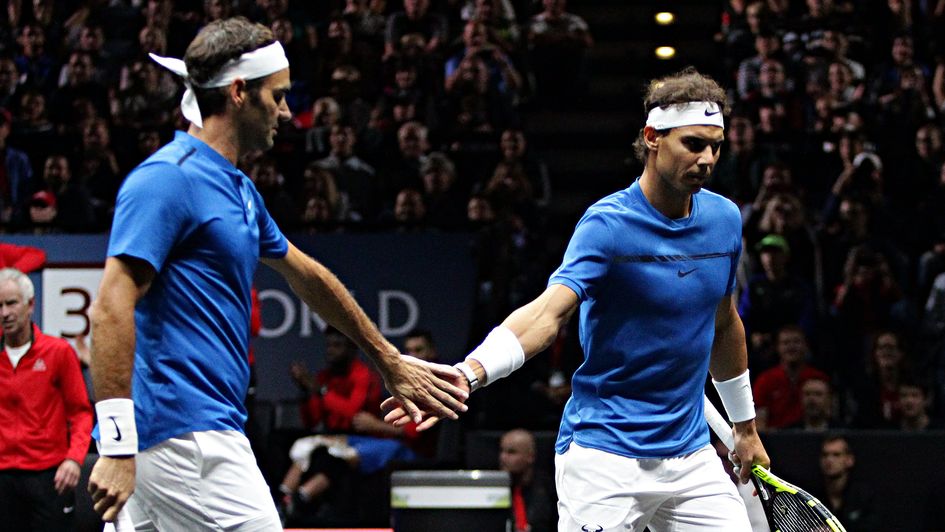 Roger Federer and Rafael Nadal in action at the Laver Cup

Andy Schooler brings you his best bets for the 2022 Laver Cup as Roger Federer brings the curtain down on his glittering career.

Whatever happens over the next few days, the 2022 Laver Cup probably isn’t going to be remembered for its winning team.

Instead it is destined to go down as the event which brought the curtain down on Roger Federer’s career – the legendary Swiss will play competitively for the final time at London’s O2 Arena.

Given the competition is his baby – Federer and his Team8 management company are the driving force behind it – that does at least seem apt.

However, there’s still a trophy to be won with Team Europe, dominant in previous editions, looking to win it for the fifth time out of five.

How does it work?

Each day features three singles and one doubles.

It’s one point for a win on Friday, two points for Saturday victories and three points for matches won on the last day, Sunday. Yes, it’s a controversial system but one that ensures the outcome can only be decided on the final day (hence the reason for it being used).

There are certain restrictions on who the two captains – Bjorn Borg and John McEnroe – can pick for the rubbers from their six-man teams.

Every player must play singles on either day one or two, a rule which usually results in the three weakest singles players being picked on Friday, leaving the better ones to compete for double the amount of points the following day.

A player can therefore play a maximum of two singles matches across the tournament.

There is no such maximum for doubles, although no pairing can play more than once and four of the six team members must play in this format across the three days.

The winning team is the first to reach 13 points. If the final score is a 12-12 tie, then the trophy will be decided by an ‘overtime’ doubles set.

The US Open runner-up made a quick return to action for Norway in the Davis Cup last weekend, winning in both singles and doubles. Clearly in fine form right now but fatigue could play a part in London.

Was below his best at the US Open following injury and only arrived in London on Thursday morning meaning practice has been limited. Seems unlikely to be playing the biggest role for Team Europe.

Another who was in Davis Cup action last weekend, winning his two singles for Greece. Prior to that, he suffered a miserable first-round loss at the US Open but it should be remembered he did beat Daniil Medvedev en route to the Cincinnati final only last month.

Unable to compete in the US due to his unvaccinated COVID status, Djokovic hasn’t played since his Wimbledon triumph more than two months ago. Should be raring to go – and will probably be happy to play doubles in which he’s adept – but racquet rust may well be in evidence.

Murray making his Laver Cup debut in 2022 isn’t quite what it would have been in 2017. There look better singles options for captain Borg with Murray likely to be a doubles specialist here – he’s just played that role for Great Britain in Davis Cup, albeit unsuccessfully.

Federer, whose last match was at Wimbledon in 2021, has already declared his farewell will be a ‘one night only’ affair – he’ll just play doubles on Friday. It promises to be some occasion but in terms of the overall result, Federer is just bit-part player this year.

Technically an alternate, Berrettini may actually have a big role to play. He’ll play singles in place of Federer on Saturday and his form suggests we may see him again in singles - the US Open quarter-finalist won three out of three in Davis Cup last week.

Ever since its inception, fans have wanted to see the so-called ‘Big Four’ together competing for Team Europe.

That scenario has now unfolded but it’s not exactly the mouthwatering prospect it once would have been.

Federer is here simply to bid the sport farewell, while Murray looks likely to continue his recent role as doubles specialist.

Then there’s Djokovic and Nadal, both of whom come in with questions to answer about their form and fitness. I doubt we’ll see either pushing themselves to the limit in terms of appearances on court.

Given all this, Team Europe do look vulnerable to a first-ever defeat in this competition.

Still, their back-up options are strong and it’s not hard to see the in-form Ruud, Tsitsipas and Berrettini playing starring roles and garnering the majority of the 13 points needed for victory.

Team World’s top-ranked player followed a first-round US Open loss with two defeats out of three in Davis Cup last week. He’ll likely be helped by a faster court in London but other members of this team look in better form.

Should play a much bigger role than at last year’s Laver Cup when he took to the court only once. Recently won four rubbers out of five in the Davis Cup Finals group stage for Canada, including two in doubles. His singles victories included one over US Open champion Carlos Alcaraz.

Team World is in the place 🌎

Schwartzman’s two previous Laver Cup appearances have seen him play (and lose) in singles on the Friday before becoming a team cheerleader. A repeat could well be on the cards after he suffered a heavy Davis Cup defeat to Mikael Ymer last week, delivering a performance so poor that he was then dropped from the Argentina team.

The only member of Team World who hasn’t played since the US Open, an event at which he starred and made the semi-finals. Captain McEnroe will hope he’s fully recovered from those exploits as Tiafoe’s form suggests he could play a major role in London.

It’s been a decent summer for De Minaur, one which continued with two wins out of two in Davis Cup last week. However, he missed Australia’s final tie in Hamburg with his captain Lleyton Hewitt describing him as “sore and beaten up” – hardly a ringing endorsement for this week.

No-one has won more Laver Cup rubbers in the competition’s history than Sock, whose doubles prowess has been well utilised by captain McEnroe. A former Grand Slam champion in that format, Sock showed his propensity for it again last week, going 2-1 in Davis Cup with Rajeev Ram, including a crucial win against Great Britain. A key man for Team World.

Team World has a much different look to it this year with regulars Nick Kyrgios and John Isner both absent. That’s a blow given both have performed well in this competition in the past.

Yet McEnroe’s men should not be discounted.

While they may not have a top-10 player in their side, Auger-Aliassime, Tiafoe and De Minaur have all played well in recent times and Sock is an excellent doubles player.

The problem may be who partners the American – Isner and Kyrgios will be big misses here in particular as there’s a definitely lack of doubles expertise in the rest of the team.

McEnroe has picked Sock for every doubles rubber he’s been available for in the past so expect him to do the same here.

Schwartzman looks unlikely to contribute much. One suspects McEnroe would rather someone else had qualified in place of the Argentine.

While Team Europe are worthy favourites, I’m far from convinced they should be 1/7 shots which is what Unibet make them.

You have to wonder how the likes of Roger Federer, Rafael Nadal and Novak Djokovic will play given their recent issues, while surely everyone is in agreement that Andy Murray is no longer the force he once was.

They do have strong alternatives but, at upwards of 3/1, TEAM WORLD may well be worth chancing, particularly given the format which means if you have your good day on Sunday then you have a great chance of lifting the trophy.

The line-up is set for Day 1 of #LaverCup pic.twitter.com/HnulRs01KX

I remember writing something similar last year, noting that Team World would need to be within touching distance come close of play on Saturday. However, they weren’t.

I think it’s more likely this year though and am happy to play to small stakes at 33/10.

The top scorer markets are of greater interest.

I’ve found these have often been priced up wrong in the past and they are certainly worth a look this time around.

The bet which leaps out straight away is JACK SOCK to be top Team World pointscorer at 9/2 – it’s something he’s landed in two of his three previous Laver Cup appearances.

History shows you really need to be siding with someone who’s going to play at least three rubbers; I expect Sock to play four – remember the doubles is always played on day three as it becomes the first match, as opposed to the last on days one and two.

Sock has done that in all three of his previous Laver Cup appearances with captain John McEnroe picking him for every doubles rubber. Given the lack of doubles expertise on Team World, that seems likely to be the case again – and Sock has won seven out of nine in the format.

The worry is will his partners be good enough to deliver the wins?

That is open to doubt but it should also be remembered that Europe will be delivering scratch pairings which may not fire too – take away the emotion and Federer and Nadal on Friday night looks weak. Indeed Sock and Frances Tiafoe have been installed as favourites.

With that factor built into the price, I think 9/2 is perfectly fair.

A smaller bet on the tournament top pointscorer is also advised at 14s.

For similar reasons, I think Andy Murray has potential at 5/1 to be Europe’s top pointscorer.

He spent last week focusing on doubles in the Davis Cup so should be well prepared. I’d expect him to play on Saturday and Sunday in this format, adding to his singles run-out on Friday against De Minaur.

If Sock isn’t able to find the right support, Murray could take advantage, although whether you want to back both him and Sock – it’s unlikely both bets win – is open to question.

Djokovic is the favourite here but he’s not playing on Friday and I’m not convinced he’ll be ready for two matches in one day on either Saturday or Sunday.

Unless he’s up for double duty, the Serb can only get a maximum of five points and this market has never been won by a tally that low.

With Matteo Berrettini not being quoted due to his alternate status, this is a market I can leave on this occasion.