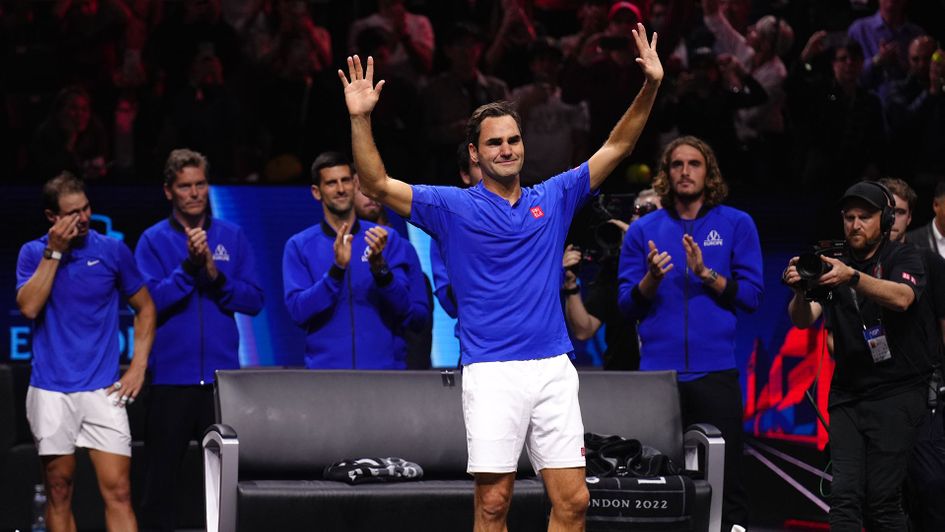 Roger Federer couldn't hold back the tears during his farwell

Roger Federer ended his legendary career with an emotional doubles defeat alongside Rafael Nadal at the Laver Cup at the O2 in London on Friday night.

It wasn't the fittingly finale everyone had hoped for just miles from the scene of his record-breaking eight Wimbledon titles - two of which coming against his greatest rival, whom he battled with on 40 memorable occasions in singles competition since 2004.

The ‘GOAT Dream Team’, with 42 Grand Slam titles between them, were beaten 4-6 7-6 (7-1) 11-9 by Jack Sock and Frances Tiafoe after over two hours on court as Team World levelled the Laver Cup at 2-2 at the end of day one - but the scoreline was merely a footnote in Federer's farewell story.

😢 Roger Federer couldn't hold back the tears as his legendary career finally came to an end.

Federer enjoyed a lengthy hug with old sparring partner Nadal at the conclusion of the match before he was given one final standing ovation by a sold-out crowd despite the clock being well beyond midnight.

“We’ll get through this somehow,” Federer said on-court.

“Look, it has been a wonderful day. I told the guys I’m happy, I’m not sad. It feels great to be here and I enjoyed tying my shoes one more time.

“Everything was the last time. Funny enough with all the matches, being with the guys and having family and friends, I didn’t feel the stress so much even if I felt something would go during the match. I am so glad I made it through and the match was great. I couldn’t be happier.

If there's one thing you watch today, make it this.#LaverCup | @rogerfederer pic.twitter.com/Ks9JqEeR6B

“Of course playing with Rafa on the same team, having all the guys here, the legends, Rocket (Rod Laver), Stefan Edberg, thank you.

“It does feel like a celebration to me. I wanted to feel like this at the end and it is exactly what I hoped for so thank you.

Federer had to fight back the tears before he thanked wife Mirka, who has watched him battle through a succession of knee operations before he finally admitted defeat in his pursuit to come back last week.

He added: “Thank you everybody. I’ve had so many people cheer me on and you guys here tonight mean the world.

“My wife has been so supportive… she could have stopped me a long, long time ago but she didn’t. She kept me going and allowed me to play so thank you. She is amazing.”

Federer had already been treated to numerous standing ovations at the O2 this week, firstly from reporters at the end of his press conference on Wednesday before again during a practice session alongside the ‘big four’ a day later.

Another round of applause greeted his entrance onto the court for this ‘last dance’. It felt fitting for the Switzerland ace – wearing his white headband – to sign off in London, the home of many of his most famous wins including a memorable first major at Wimbledon in 2003 and then a record 15th grand slam six years later that moved him ahead of old rival Pete Sampras.

When the first ball was hit in anger, after a 10.11pm start, Federer required a matter of seconds before a lightning quick volley at the net brought about a thunderous noise inside the arena.

🐐 Farewell to the People's GOAT pic.twitter.com/q6W5Y49nO8

Alongside his long-term sparring partner Nadal, the competitive juices were flowing when Federer produced a superb serve-and-volley in the seventh game.

The former world number ones were in the mood now and produced clutch tennis at a critical moment to take the opener in 42 minutes after more superb net play by the 41-year-old.

The one, the only @rogerfederer. #LaverCup pic.twitter.com/DIudykDUNn

In keeping with this unique situation, Novak Djokovic, the holder of 21 majors, was on hand to offer words of wisdom when required and also one of the most enthusiastically celebrating any point won by the partnership dubbed Fedal.

The tables were turned in the second set and despite Federer’s right knee seemingly holding up – it was a succession of operations on that part of his body which saw him finally admit defeat in his attempt to continue playing – tiredness started to set in for both of the hall of famers.

Sock and Tiafoe had warned they were not there to make up the numbers and duly clinched the second set to force a tie-break decider.

While the Americans would eventually claim victory after two hours and 14 minutes, they did so only after a handful of lasts for Federer, who sent down a 116mph ace and a delightful deft drop shot that proved the final winner of a simply extraordinary career.

Incredibly sad and inspiring in equal measure. After 20-odd years of GOATness, this ended up being Roger Federer's last winner. 😢#LaverCup pic.twitter.com/Ck7QfYMPeg

Team World triumphs in the doubles.

Roger Federer hitting targets nobody else can see in his final match#LaverCup pic.twitter.com/byP8AUcFqo

"Rolling back the years!" 🙌

Big cheer from the crowd after Fedal win the first 3 points of the match tie-break!#LaverCup pic.twitter.com/2dTn1zb2i7

👌 With 42 Grand Slam titles between them, Roger Federer and Rafael Nadal are teaming up in style...pic.twitter.com/iMx54mmPpJ

A marathon two-hour-and-29-minute clash between Andy Murray and Alex de Minaur kicked off the evening session with the Team World player winning 5-7 6-3 10-7 to get the visitors on the board.

Double Wimbledon champion Murray had displayed plenty of his trademark defence during a lengthy battle but it was the Australian who held his nerve in the 10-point tie-breaker.

“I just wanted to do anything I could to get the win for my team and I managed to find a way,” de Minaur said on-court.

“I don’t know how much tactics were out there. It was be ready for a battle and for however long it took. Andy is a hell of a player, he has done so much for the sport and it is just great to have him around.”

Roger Federer fist bumping Rafael Nadal after an Andy Murray winner before tucking back into his buffet dinner pic.twitter.com/nDrEfShFGG

A protester had grabbed the headlines during the afternoon session when he set fire to his arm in an act to highlight the climate issues surrounding private jets being used in the UK.

It was during a changeover between sets in Stefanos Tsitsipas’ 6-2 6-1 win over Diego Schwartzman that the spectator raced onto the black court and briefly had his arm ablaze before security were able to step in.

Tsitsipas admitted: “It came out of nowhere. I have no idea what this is all about. I never had an incident like this happen on court. I hope he is all right.”

Met Police later revealed the protester, who had been wearing a t-shirt which read ‘END UK PRIVATE JETS’, had been arrested on suspicion of aggravated trespass.

A statement added: “He has been taken to hospital as a precaution; his injuries are not believed to be life-threating or life-changing.”

Victory for Tsitsipas followed up Casper Ruud’s thrilling success over Sock at the beginning of day one 6-4 5-7 10-7.

The US Open runner-up and world number two had to fight back from a three-point deficit in the tie-breaker to take the opener.

Ruud received in-game coaching from his Team Europe colleagues, notably Nadal, and said: “Obviously I was focused about the match and trying to win it but it is fun, you turn around and have Rafa on one side and Roger on the other trying to help.

“I didn’t feel like I needed an unbelievable amount of help but they gave me some good tips.

“I had never played Laver Cup tie-breaker. They said to take it one point at a time. I think it was good advice and feels a bit surreal to have them on both sides.”