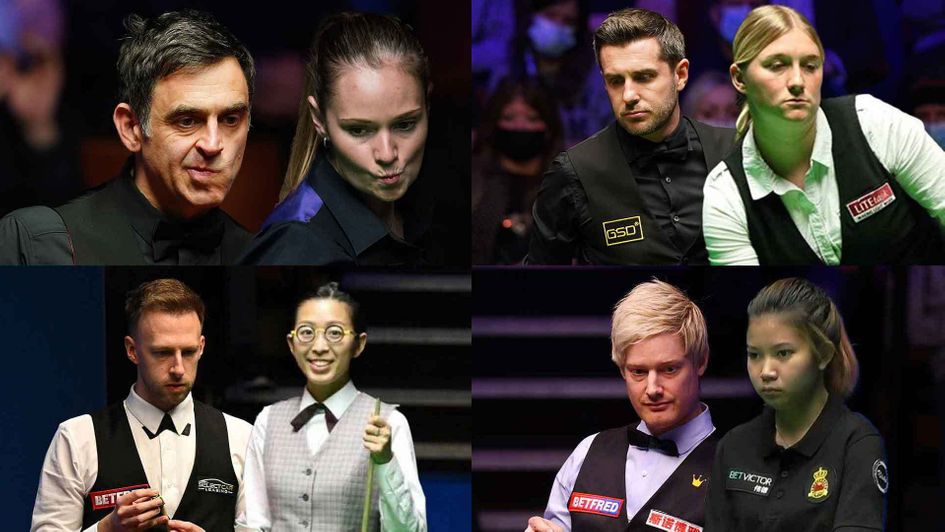 Find out all you need to know about snooker's World Mixed Doubles tournament which takes place in Milton Keynes on September 24-25.

The invitational event, the last edition of which was held 31 years ago, paired the world’s top four men and women, initially in a round-robin league of four-frame matches.

The top two teams after the group matches faced off in Sunday's final.

The four teams will compete in a round-robin format, followed by the final with the winning team crowned champions. Each round-robin match will be four frames. Teams will score one point for each frame.

At the end of the group phase, the top two teams will go through to the final, which will be best of seven frames. The two players in a team will make alternate visits to the table, not alternate shots.

All the matches will be broadcast live on ITV Sport.

Session times are 1pm and 7pm on both days. Each of the first three sessions will feature two group matches, so all eight players will be in action.

The final will then take place on Sunday September 25 from 7pm.

Meet the teams and video previews

Robertson won more titles (four) than anyone during the 2021/22 season, including the Tour Championship and the prestigious Masters crown. His team-mate, aged 22, is a real star of the future having won her first world title in 2022.

Neil Robertson said: "I don’t think it’s been held officially on television for a very long time. It has been held before. It was held in my old snooker club in Cambridge, and it seemed to be that whoever was partnered with Reanne [Evans] would win it.

"I had that opportunity to play with her once and we won it, which was great. There was a lot of tactics involved in terms of who followed who, but with Reanne, who was head and shoulders above the other players, you couldn’t really rely on the order of play. If you were partnered with Reanne it was two heavy scorers following whoever were to miss or make a mistake.

"But you look at women’s snooker and how much it’s progressed over the last five or six years, where the women’s players are winning matches on the tour and competing in a lot of matches, and all the players involved are going to be really competitive – which is what you want to see for an event like this.

"I’m very excited to be partnered with her [Mink] because it was a couple of years ago that she made that 147 recorded on video, and I’ve seen her play since. She beat Mitchell Mann a couple of weeks ago, so she’s a really good player. It’s great to see the younger female younger players coming along. It’s very exciting. I hope the format is really good and it gets the exposure it deserves."

The Rocket won a record-equalling seventh world title back in May while he has the most ranking titles (39), Triple Crowns (21) and 147s (15) and century breaks (1171) than any other player in history. Accompanying him is the most successful ever women’s player with 12 world titles.

Reanne Evans said: "I was like, you’ve got the best player in the world, the best player ever to pick up a cue, in my eyes. But then you’ve also got to perform in front of him as well!

"He’s a great guy and I’ve had the privilege to play with him and against him in Snooker Legends and exhibitions.

"Hopefully it’ll make me a little bit more relaxed because I’ve been there and done it. Obviously not on TV in a proper match, but I’m looking forward to it and hopefully he is too."

Judd Trump said: "It brings a different type of pressure. You don't want to let your partner down. I'm hoping that I don't let her down.

"This is a new event and we want to be the first pair to win it. I think with my potting, her safety and her potting we will have a good chance to win

"Hopefully she keeps up the form she had beating Ken when she plays with me. It was an amazing win to beat Ken, I know he is coming to the end of his career but he is still a great player.

"I've seen a bit of her recently and she looks like she is putting the work in. Each time I see her, she seems like she is improving. I think she is spearheading the women's game at the moment and managing to get the wins against the men. It is a brilliant draw for me."

WST Chairman Steve Dawson: "This is the first time that a mixed doubles snooker event will be broadcast live on free-to-air television so it’s a very significant moment for our sport. We’re delighted to partner with ITV and BetVictor for this fantastic tournament.

"Snooker is a game for everyone, regardless of age, gender and nationality, and we have proved this with the expansion of our tour and of the sport at grassroots level.

"There is no reason why men and women can’t compete together and we are thrilled to have – for the first time – four women on our professional tour in the coming season."