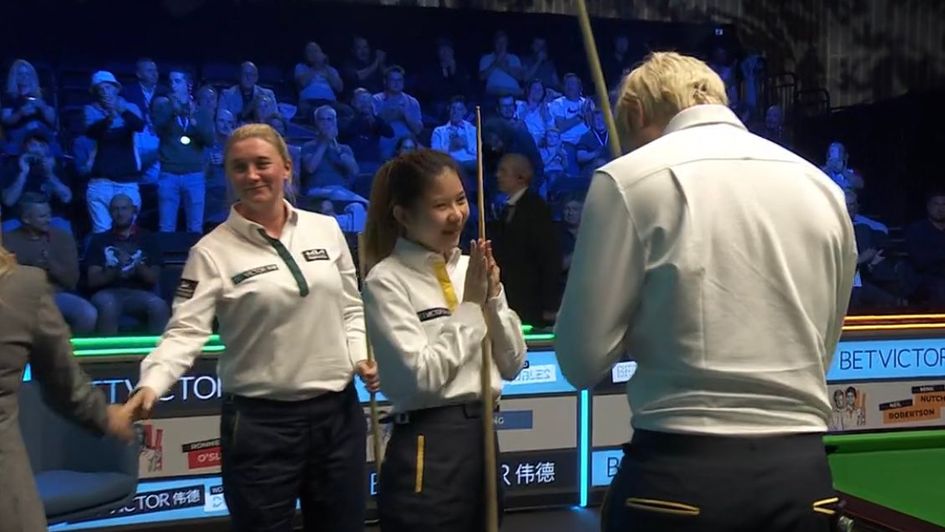 The invitational event, which was last seen as an all-male tournament 31 years ago, paired the world’s top four men and women, initially in a round-robin league of four-frame matches.

Players each took alternate visits and all of the frames were played, with each pair earning a point for each frame they won across their three matches.

After the opening day, Robertson and Mink were bottom of the table with just two points after an opening 3-1 defeat against Mark Selby and Rebecca Kenna was followed by another loss by the same scoreline to Ronnie O’Sullivan and Reanne Evans.

They subsequently needed a 4-0 victory over Judd Trump and Ng On-Yee in their final group game on Sunday afternoon to stand a chance of finishing in the top two and earning a place in the final, but they duly obliged in the style.

Selby and Kenna's 3-1 triumph over O'Sullivan and Evans secured top spot for themselves but this scoreline also allowed Robertson and Mink to pip the 'Dream Team' into second place against all the odds.

The Leicester cueman gave his team a superb start with a fine break of 107 but Robertson's efforts of 69 and 67 across the next three frames moved them into a 3-1 lead.

Selby and Kenna pulled one back but Robertson and Mink sealed glory in the sixth frame to walk away with the trophy and £30,000 apiece.

Robertson said: "We gave it a go and I played better than yesterday. But Mink produced a stunning 74 clearance earlier today which was actually our highest break of the tournament! This shows what a great player she is, especially under pressure, and she did it again in the final.

“It was her performance in the last match before the final and that filled me full of confidence because I knew, even if I were to make a mistake, if she was given an opportunity she would do really well.

"This tournament was about showcasing the women this week and they've done that. It's been great to be a part of."