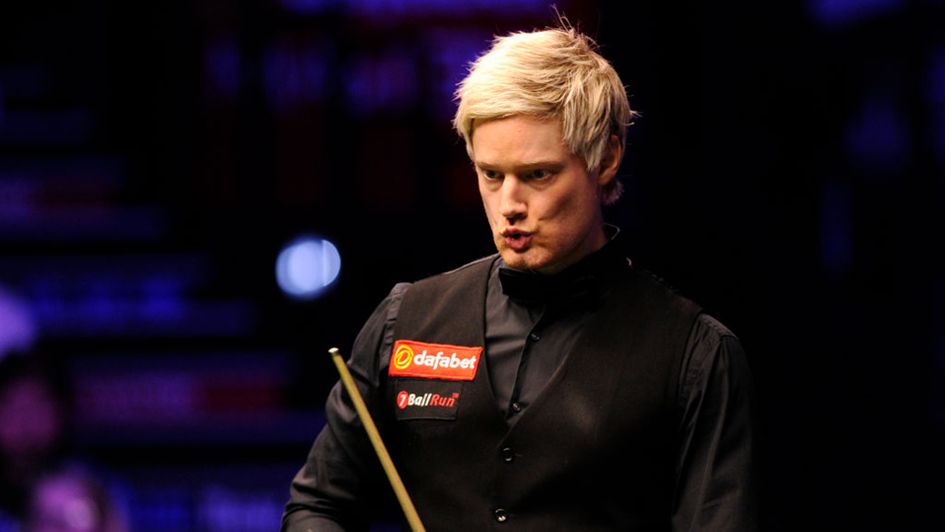 Less than a month after O'Sullivan had produced a scintillating burst of snooker to come from behind and win their World Grand Prix final encounter, this time Robertson gained a measure of revenge to advance to the last four.

It was a deserved win for the Australian, who bagged a century in the first frame and was never behind in the match. But he'll know that it was far from a flawless display as he gave up a series of opportunities to win frames and kept allowing O'Sullivan a second chance.

Robertson will face Mark Williams in the semi-final after the Welshman outlasted fellow Class of '92 luminary John Higgins 6-5 in a thrilling evening session.

The two greats then traded frame for frame and break for break as Williams hit a 66 and 78 to lead 4-3 and 5-4 but Higgins replied with runs of 127 and 61 before the Welshman won the decider, capitalising on an early error from his rival to compile an ice-cool 91.

Williams will face Robertson in the semi-finals on Saturday - and the Australian was delighted with his earlier win.

"I felt as though I hit the ball fantastically well," said Robertson, who made two centuries to O'Sullivan's one and was far more effective at taking chances from range.

"I missed a couple of balls and so did Ronnie but that's to be expected, there's a lot at stake. I was really determined to try and put in a good performance and I think I did that.

"It's like playing Federer at Wimbledon, you know you're going to have the majority of the crowd against you, but it's nothing to do with me personally, I'm sure they really enjoyed the snooker that I played.

"Ronnie is like no other player we've ever had in the game. You need to respect that but you also need to be ready to play well when you get the chances.

"I felt as though maybe 90 percent of the match was fantastic.

"If you can't get up for this kind of event, you should hand your place to somebody else. I'm going to be as determined as anyone else who's left."

"I'm not too disappointed"

Ronnie O'Sullivan reacts to his quarter-final loss to Neil Robertson at the Masters ❌#CazooMasters | @WeAreWST pic.twitter.com/M0bgoXWxjB

O'Sullivan was unable to find those gears from the World Grand Prix, his first title since the 2020 World Championship, but was typically upbeat having been second best for most of the match.

"I tried to make as much of it as I could, tried to hang in there, do what I could - I think that's the best I could've got out of today so I'm not too disappointed," said the seven-time Masters champion.

"I'm probably not as disappointed as I would've been years ago. I play for different reasons and I enjoy it, just a shame I couldn't find a good enough game."