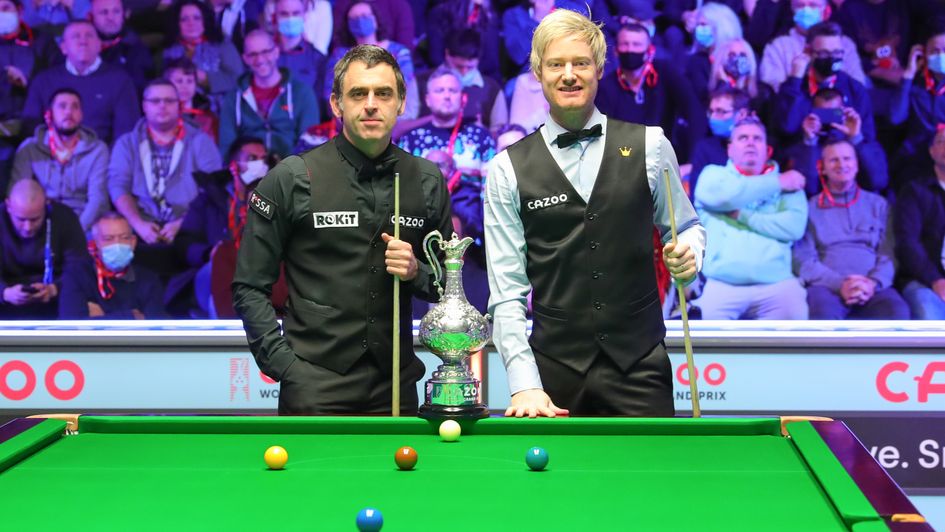 Ronnie O'Sullivan produced an astonishing late flurry to come from 7-5 behind to beat Neil Robertson 10-8 in the final of the World Grand Prix in Coventry.

For much of the final, the scratchy from O'Sullivan has struggled with all week looked set to deny him his first title success since the 2020 World Championship, only for the 46-year-old to burst into life and leave Robertson stunned and, ultimately, defeated.

When O'Sullivan missed a tricky red in frame 12 and Robertson stepped in with a ruthless clearance of 88, the Australian appeared to have finally broke the back of the match having seen his opponent somehow stay in the contest despite lacking any sort of rhythm for the most part.

However, O'Sullivan retuned from the mid-session interval with a real purpose to his stride and was soon level having peeled off a silky run of 90 before then dominating frame 14.

When the 2018 champion added consecutive breaks off 77, O'Sullivan had won four frames on the bounce to turn the match on its head in less than 45 minutes.

👏 It's his first since the the 2020 World Championship so his rivals better watch out heading into 2022. pic.twitter.com/eBR93uifAk

To his credit, Robertson rallied with game response of 78 to reduce his arrears to 9-8 and keep his hopes alive, only for a miscue moments later to hand O'Sullivan a clear path to the winning line.

Typically, O'Sullivan didn't blink, a brilliant straight red along the left-hand side cushion played with his left hand opening the door to victory.

In the blink of eye, that victory – his 38th ranking title win – was his, as one final split on the reds put the finishing touches to a late blitz that had to be seen to be believed.

O'Sullivan said afterwards: "I was determined all match. Neil should have been ahead in the afternoon by a long way but he wasn't, so he gave me a chance. I just found something for four frames which I've done pretty much most of the tournament.

"He's a great champion, Neil, brilliant for the sport, a brilliant ambassador. For me, he's got the best cue action ever in snooker, he plays an amazing game. For me, he's one of the best players that's ever lived.

"I've enjoyed competing against Neil today. The fans have been amazing all week, they've come out even though there's covid going on.

"I’ve won so much in the game that I’ve got to start to enjoy the occasion and if I don’t give it 100 per cent all the time, I’ve earned that right. OK, I’ve won tonight but losses aren’t that bad either. I just want to enjoy my snooker."

Nobody in the history of snooker, or any sport, has been able to freewheel - from absolutely nowhere - and steamroller world-class opponents like Ronnie O'Sullivan can. He couldn't make a 50 break an hour ago and what he's done since is astonishing. A pure genius.