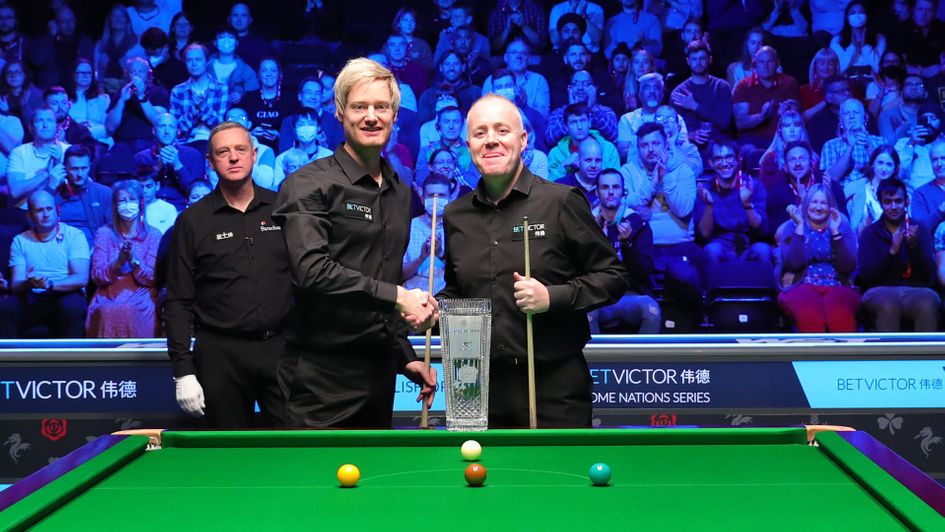 Neil Robertson and John Higgins played out an engrossing final

Neil Robertson dealt John Higgins another gut-wrenching defeat by taking the final of the English Open 9-8.

The Australian trailed 8-6 but won the final three frames to lay to rests the ghosts of his defeat to Judd Trump a year ago, in another classic which went the distance and saw the latter win it with a century.

This time, Robertson was able to capitalise on Higgins' failure to take the first real opening of the final frame, forcing the 46-year-old to sit and suffer as the prospect of a 32nd ranking title slipped away.

Indeed for the Scot those ghosts may multiply, for he had this title within his grasp just as he had been in full control of the Northern Ireland Open last month only for Mark Allen to snatch it from him.

Higgins could do little about the century with which Robertson took the final the distance, but two excellent pots early in the decider had opened up a genuine title-winning opportunity which he failed to take.

Following a reprieve, Robertson's first red wobbled but dropped and he made no mistake despite a tricky table, winning for the first time since marrying his long-term partner in August.

It was a deserved success, Robertson having been the heavier scorer as he secured a 21st ranking title and moved to seventh in the all-time list.

"He's someone as a kid I absolutely idolised," said Robertson of his bitterly disappointed opponent. "I always dreamt of meeting him; to be standing here sharing a table is incredible.

"I just had to dig in, because he came out all guns blazing tonight. I found something from somewhere, and I seemed to play my best snooker towards the end of the match."

Higgins made no secret of how much this one hurt, telling Alan McManus: "The last two finals have shown I haven't really got it at this level.

"Neil is an unbelievable champion, one of the best ever. It was a great final to be involved in, I came out the loser once again but every credit to him."