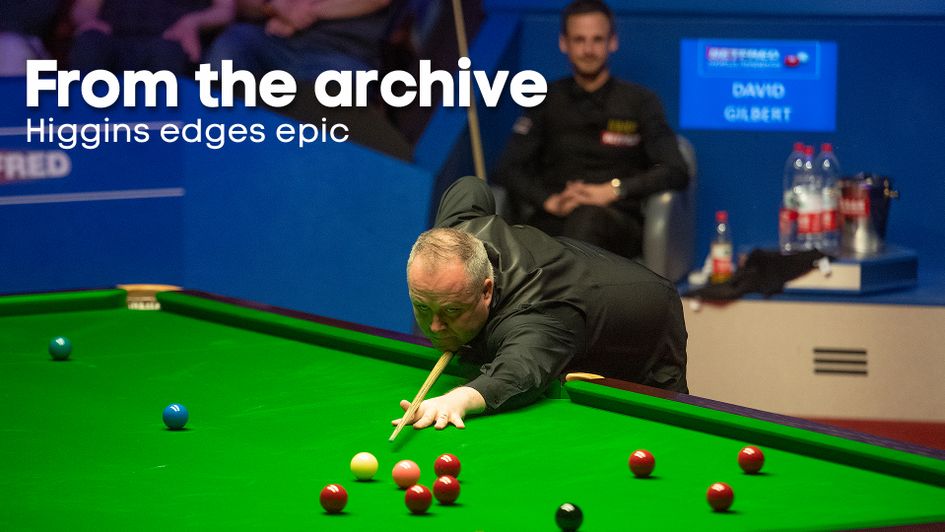 John Higgins came back from the dead against David Gilbert

From the archive: Four-time world champion John Higgins defeated David Gilbert 17-16 in a semi-final thriller to reach the World Snooker Championship final in 2019.

John Higgins will compete in his eighth World Championship final, and third in a row, after beating David Gilbert 17-16 in an epic semi-final clash at the Crucible Theatre that came to a pulsating climax after four sessions of absorbing snooker.

The 42-year-old Scot overturned deficits of 8-3, 10-6 and 14-11 to progress against Gilbert, showcasing his quality and vast experience to first fight back and then take the final two frames with breaks of 139 and 55 to advance.

A break of 96, following a rare double re-rack, moved him ahead in the match for the first time at 15-14 but Gilbert, appearing at this stage for the first time, found another level, producing a run of 78 to square the scores.

Gilbert then edged ahead after a dramatic, 40-minute 31st frame in which Higgins fell short after clawing back two of the three snookers required.

The Scot drew on all his acclaimed match-play experience to force a decider with a total clearance of 139 in frame 32, capitalising on a missed black from Gilbert to hit what would prove to be a match-winning 55 break and take the tie 17-16.

It capped a remarkable revival from Higgins, who had threatened to retire from the game after crashing out in the second round of the UK Championship late last year.

And he had also twice been forced to haul back five-frame deficits against Gilbert, after a torrid second session on Friday which some pundits labelled one of the worst performances of his career.

Gilbert was left to rue missed opportunities to kill off the match on Friday and was visibly emotional as he paid tribute to his opponent afterwards.

He said: "I’m absolutely gutted to lose. I could have got to a world final but I’ve got nothing to feel sad about.

"I came here with no expectations and to end up on the one table against a legend like John, it was an honour."

For Higgins, attention now turns to a meeting with Judd Trump and a repeat of the 2011 final in which the Scot prevailed 18-15.

Higgins said: "I was really poor and I think Dave really let me off the hook. I was over the moon to be only 13-11 [behind, on Friday night]. I was feeling good but nothing was happening.

"Judd is an unbelievable all-round player now, while when I played him in 2011 he was just crash, bang, wallop and normally they were going in.

"I’ll be playing a different Judd Trump. The way he dismantled [Ronnie] O’Sullivan in the Masters has given him the confidence to come here as one of the favourites."

Crucible champions through the years