Useful 135-rated hurdler. Won on both starts over the larger obstacles so far, winning well in small runner fields. May appreciate the drop in trip and makes more appeal than most.

Irish mare smart over hurdles and off the mark at the third time of asking over fences when wining by over 50L at Thurles in October before going down by a short-head in a Bangor Listed contest last month. Another bold bid likely.

Off the mark for current connections at the third time of asking landing a Punchestown hurdle by 17L on good ground before landing a Listed mares' event at Killarney when last seen in May. Interesting recruit to this division.

Winner of one of her 11 starts over the larger obstacles but has posted a number of dismal efforts since September. Not in the form required to come in for serious consideration in this company.

Bounced back to form on return to action last month in a Thurles mares' chase over 2m2f on soft ground beating 10-rivals, including the Willie Mullins-trained favourite Good Thyne Tara, by a commanding 12L. Vast potential.

The Henry De Bromhead yard last won this contest in 2009 with the mare Royal Choice and can add to that tally with the likable daughter of Oscar SINORIA. The six-year-old won a Listed contest over hurdles at Punchestown in February before looking a little overwhelmed in the Grade 2 Mares' Novices' hurdle at the Cheltenham festival in March, but bounced back to form at Thurles last month on chasing debut. More experienced chasers Tintangle and Agusta Gold can compete for remaining prize money while the Willie Mullins-trained Elimay looks a fascinating contender on her debut over fences.

Mark Johnston's three-year-old Perregrin is backed to complete an all-weather double at Newcastle on Tuesday. 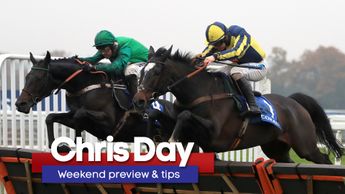 Chris Day takes an early look at the markets for Festival Trials Day at Cheltenham and his fancies include a 20/1 chance in the Timeform Novices' Handicap Chase.

3h
All Racing Tips
Most Followed