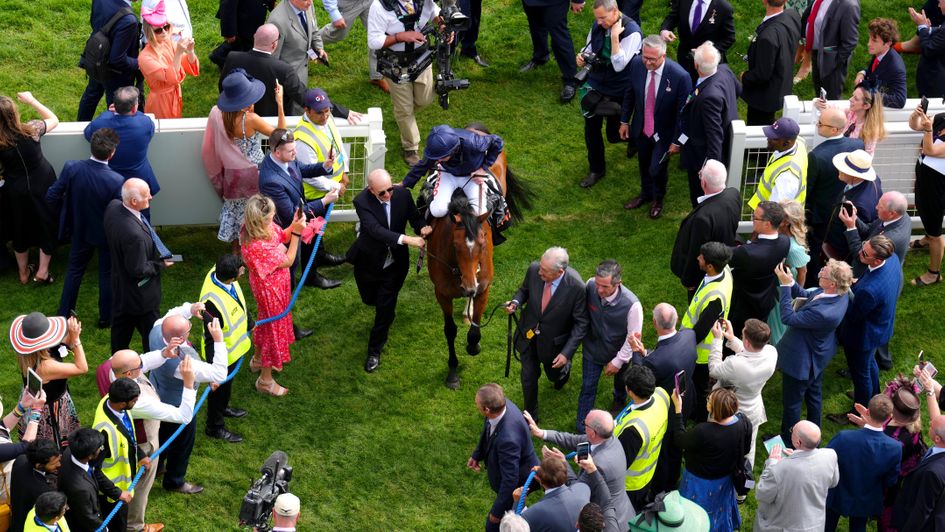 Oaks winner Tuesday has been supplemented for the Irish Derby

Why Galileo and Frankel need another Irish Derby victory

With Royal Ascot completed, John Ingles assesses the state of play in the sires’ championship going into the Irish Derby this weekend.

Saturday’s Dubai Duty Free Irish Derby (3.45 Curragh), worth €570,000 to the winner, is the next in a series of very valuable contests throughout the summer which will go a long way to deciding the title of champion sire in Britain and Ireland. We had become used to the sires’ championship being a one-sided contest but things were very different in 2021 and, at this stage of the season, another fascinating battle looks set to take place between the top sires in the coming months.

It was Galileo, of course, who dominated the sires’ list year after year. In 2020 he won his eleventh consecutive championship and his twelfth overall. On three occasions between 2016 and 2019 his seasonal earnings in Britain and Ireland broke the £10m barrier and in 2016 he had more than £8m to spare over runner-up Dark Angel.

But, like all good things, the Galileo era has to come to an end and that end is now in sight following his death at the age of 23 almost a year ago. Coincidentally, Galileo also lost his title in 2021 – but only narrowly compared with the amount he had to spare when successful for all those years - and it’s probably a bit hasty to write him off winning back his crown posthumously. 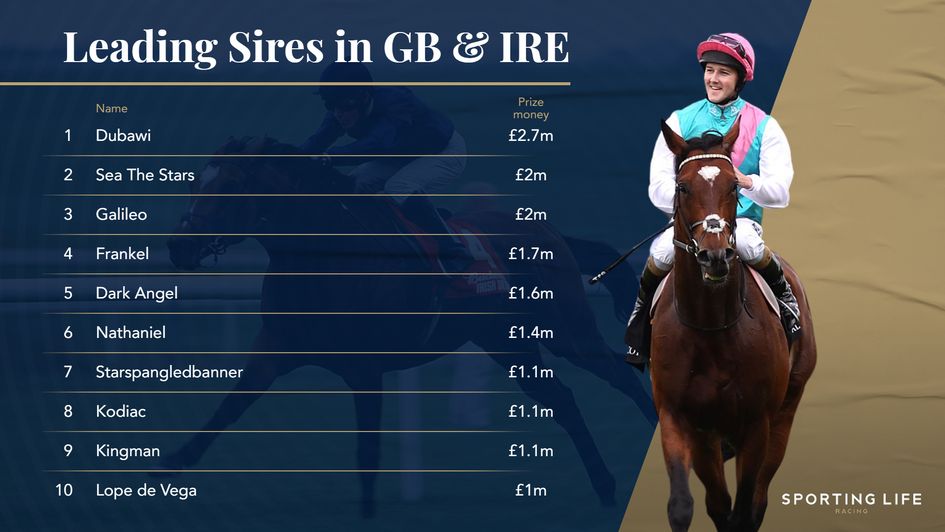 This year’s Irish Derby will likely be crucial to Galileo’s latest title bid. He won the race himself in 2001, when easily following up his Epsom success, and has gone on to sire the Curragh winner on six occasions (one more than his tally of Epsom Derby winners), mostly recently with Sovereign in 2019.

It was looking as though Changingoftheguard and Stone Age – fifth and sixth at Epsom – would be Galileo’s main contenders at the Curragh on Saturday but Ballydoyle have thrown in a plot twist by adding Oaks winner Tuesday to the line-up. Tuesday was a belated first Group 1 winner from Galileo’s current crop of three-year-olds when successful at Epsom (replay below) and now assumes the position of her stable’s, and her sire’s, main Irish Derby hope even though Changingoftheguard has since put his Derby defeat behind him when winning the King Edward VII Stakes at Royal Ascot.

It was Galileo’s son Frankel who finally ended his father’s reign as perennial champion last year. The Irish Derby was just one of several major prizes which helped to shift power from father to son; Irish Derby winner Hurricane Lane went on to win the St Leger as well, while Godolphin stablemate Adayar completed the Derby-King George double. Hurricane Lane had earlier finished third to Adayar at Epsom and, once again this year, it’s another son of Frankel, Westover, who will be bidding to convert a third-place finish at Epsom – where he was unlucky not to get second – into victory at the Curragh. 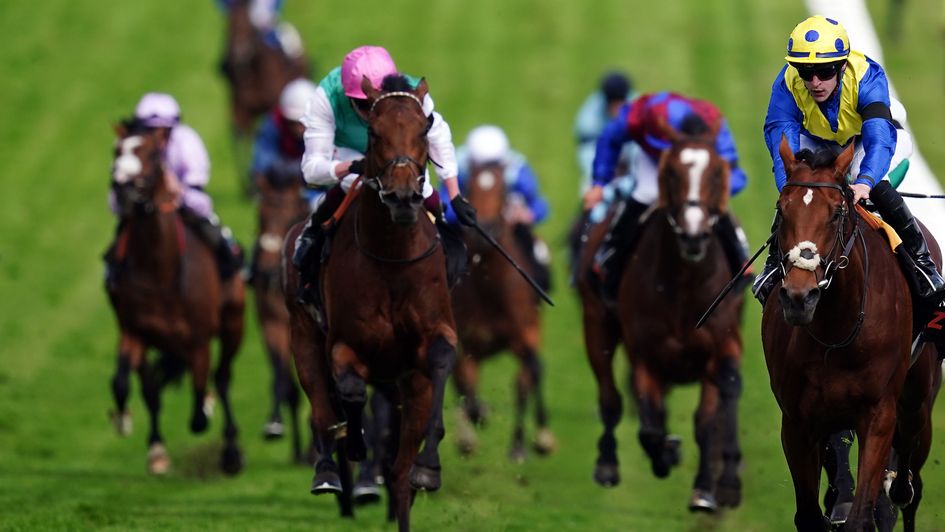 Westover might be the stand-out colt in Frankel’s current crop of three-year-olds but it may well be his fillies who contribute most to their sire’s push to retain his title. His leading two-year-old daughter of last year, Inspiral, made a belated but impressive and high-class return to action in the Coronation Stakes at Royal Ascot, a performance to rival that of another exciting daughter of Frankel, Homeless Songs, who dealt a five and a half length beating to Tuesday in the Irish 1000 Guineas.

With Oaks third Nashwa continuing her progress by winning the Prix de Diane last weekend, Frankel has another serious crop of three-year-olds and that’s even before the campaigns of his big hitters from last season have properly got underway.

Hurricane Lane looked a little rusty on ground firmer than he’s used to when third in the Hardwicke on his return at Royal Ascot, while Adayar’s reappearance this year has been delayed a few times, with a defence of his King George title now scheduled to be his first run of the year.

An Irish Derby success for either Galileo or Frankel would spice up the sires’ championship as they are currently lying third and fourth respectively behind Dubawi who enjoyed a tremendous Royal Ascot. His five winners there alone amassed more than a million pounds in prize money, with the highlight being the one-two from his sons Naval Crown and Creative Force in the million-pound Platinum Jubilee Stakes. Coroebus landed Dubawi’s other Group 1 prize of the week when following up his 2000 Guineas success with victory in the St James’s Palace Stakes. 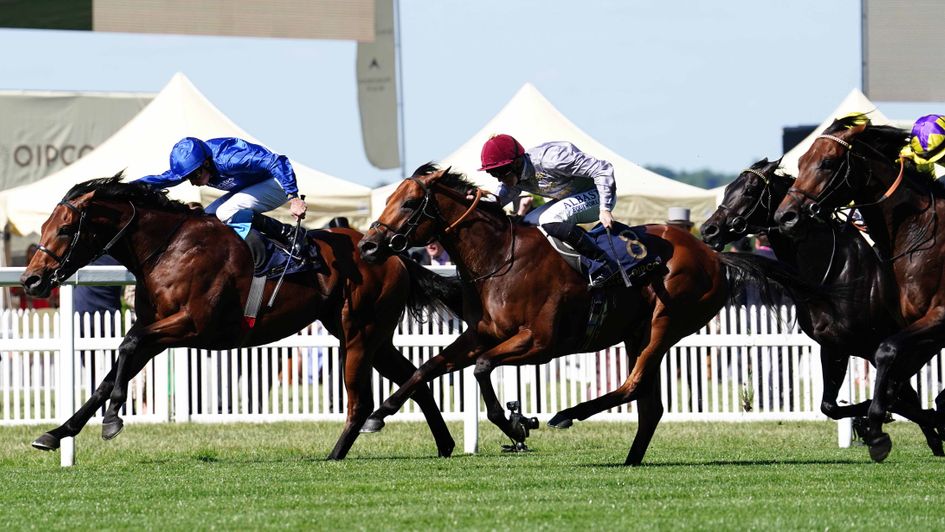 Apart from reminding us why he can command a £250,000 stud fee, Dubawi’s Royal Ascot performers demonstrated a versatility which the likes of Galileo and Frankel cannot match. Distance-wise, they ranged from those first two in a Group 1 sprint to the unbeaten Eldar Eldarov winning the Queen’s Vase over a mile and three quarters. That’s one reason why Dubawi is leading the sires’ table, at the time of writing at least, but another is his impressive strike rates. 40% of his runners have won races this year and they’ve been winning around one race in every four that they contest, figures that no other sire can equal.

If Dubawi can remain front until the end of the season, he certainly wouldn’t be winning his first sires’ championship out of turn. He has been runner-up to Galileo four times and has finished third on another three occasions, including last year.

Another sire enjoying an excellent season is Sea The Stars, currently second in the prize money table just above older brother Galileo. Not everything has gone his way lately, however. Stradivarius didn’t enjoy the run of the race in third when bidding to win his fourth Gold Cup (in which runner-up Mojo Star added more good place money for their sire), Emily Upjohn lost out to Tuesday by the narrowest of margins in the Oaks and Hukum’s Coronation Cup victory came with a sting in the tail when it was found that he had sustained a serious leg injury which will keep him out of action for the rest of the season at least. 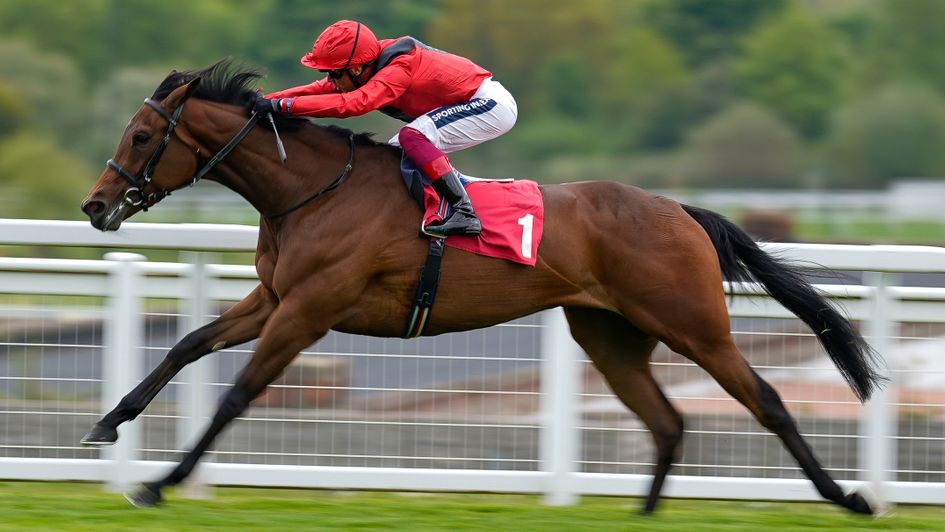 Emily Upjohn is a daughter of Sea The Stars

But Hukum’s brother Baaeed proved as reliable as ever when stretching his unbeaten record to eight races in the Queen Anne Stakes. With races like the Sussex Stakes and Juddmonte International on his agenda in the coming months, Baaeed is going to be instrumental in Sea The Stars’ championship bid, though there’s surely at least one valuable prize to be won with Emily Upjohn as well.

Dark Angel is fifth in the current standings and has several top-five placings to his name already in the sires’ championship in recent years. He owes his success mainly to weight of numbers and has had more wins than any other sire this year, but the lack of a potentially really big earner since the retirement of top sprinter Battaash is likely to restrict his earnings potential. It hasn’t helped him, either, that his best horse currently, Real World, has come up against Baaeed in both the Lockinge and the Queen Anne.

In contrast to Dark Angel, it’s lack of numbers that are likely to hold Nathaniel back from a genuine bid for the sires’ championship. Standing at just a fraction of Dubawi’s fee, £15,000, Nathaniel is punching his above his weight in sixth place in the current sire standings, though he’s well used to that from when Enable was his flagship horse. Until the latest season, all of Nathaniel’s Group 1 winners had been fillies but that all changed when Desert Crown won the Derby in the manner of one of the best winners of the race this century. 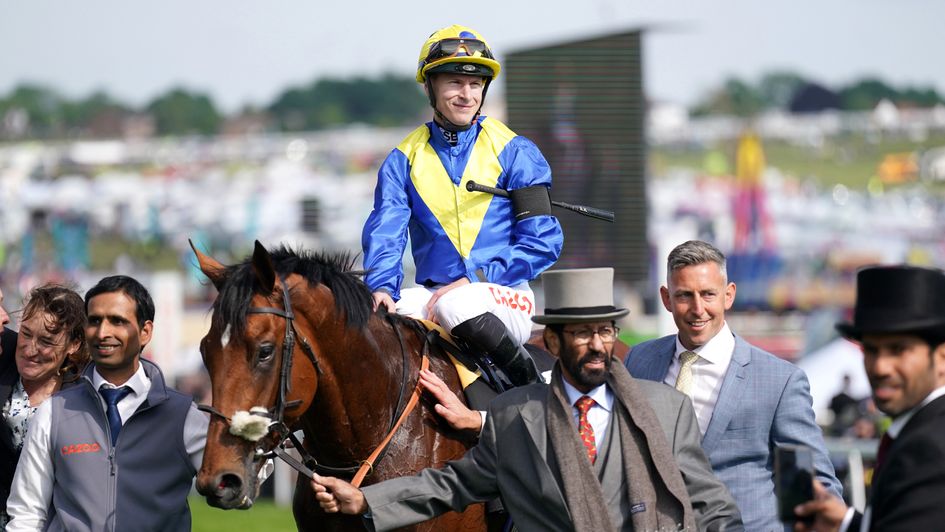 Taking Desert Crown’s Dante win into account as well, his earnings already this year of just over a million pounds account for more than two thirds of his sire’s total prize money haul.

That’s well short of what it would take to make Nathaniel champion sire, but Desert Crown will surely add more to his bank balance, perhaps starting with the King George which Enable won three times and which Nathaniel himself won as a three-year-old.