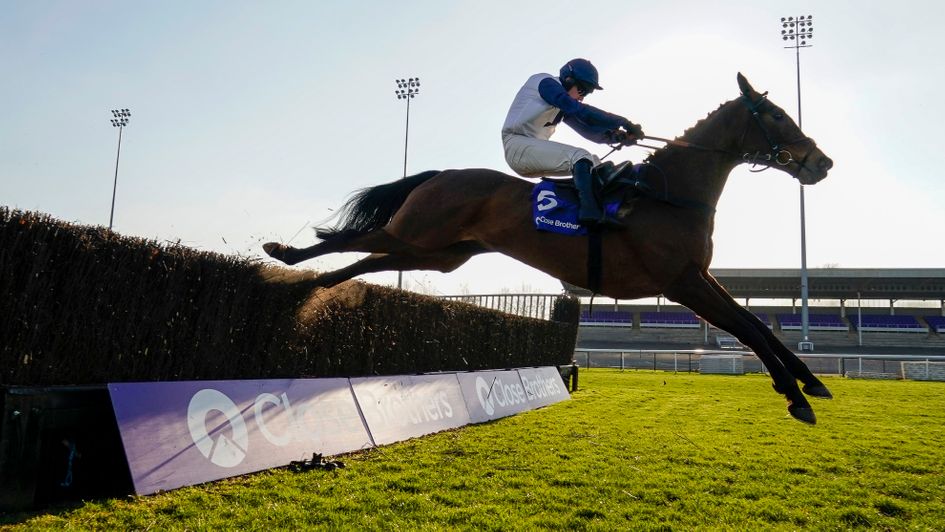 Clondaw Castle soars over the last at Kempton

Trainer Tom George is confident Clondaw Castle will prove a “different horse” in the Betfair Chase on Saturday compared to the one that tasted defeat on his seasonal return, provided conditions at Haydock Park remain in his favour.

The Slad handler is praying that rain stays away from Haydock Park for the remainder of the week to help maximise the chances of the nine year old opening his account at the highest level in the first Grade One contest of the Jumps season.

After securing the biggest success of his career in the Grade Three Close Brothers Handicap Chase at Kempton Park in February, the Oscar gelding signed off last season filling the runner-up spot in the Grade One Betway Bowl at Aintree.

Clondaw Castle could only finish third on his return in the Grade Two Charlie Hall Chase at Wetherby last month, however George believes he can take a significant step forward returned to a more suitable track on a sounder surface.

George said: “The ground at Wetherby ended up being too soft. That track on that ground first time out just found him out as it stretched his stamina. The ground was softer than ideal and it turned into a real stayers’ race.

“The positive is that Haydock is a much sharper track and the ground looks like being better. Provided it doesn’t rain, you should see a different horse.

“We could have waited for the Many Clouds at Aintree in a couple of weeks’ time but as the conditions are right here we might as well go for this as the ground is most important thing to him.

“I’m not a betting man but I think he can put it up against quite a few of them if the ground stays as it is.”

With the current Good to Soft ground at Haydock Park set to be in Clondaw Castle’s favour, George also hopes he can put his assured race fitness to good use against a number of rivals who will be making their seasonal re-appearances.

He added: “Some people have them ready for their life first time out but from my angle it is good that he is going into the race with a run under his belt as mine always come on for their first run.

“Everything looks to be in his favour. He wants three miles on good ground as that is important to him and he has already had a run which is a big advantage.

“Hopefully, he can run a big race and put it to them on Saturday.”

Clondaw Castle may have been out of luck on his three previous Grade One attempts, but George believes that he can strike gold at the highest level at some point this season, even if he fails to do so at the weekend.

He added: “He was always going to improve for the step up in trip to three miles which he showed when winning around Kempton.

“We have been fortunate to have had around a dozen Grade One winners and I can’t see why this lad can’t add to that tally at some stage.

“That doesn’t necessarily mean it will be this one but if the cards fall his way he has got the potential to win a Grade One as he is a similar type to most of ours that have won at that level.”

Clondaw Castle is a 25/1 chance with sponsor Betfair.