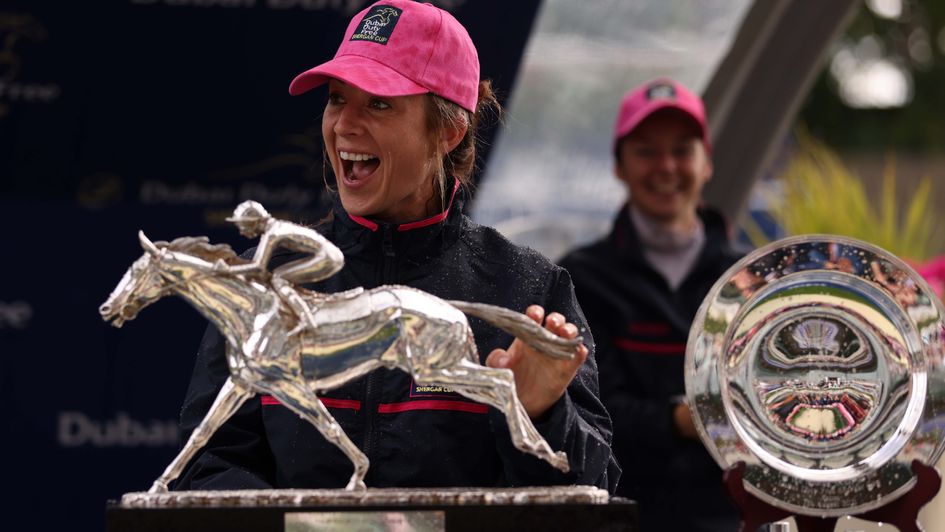 We have all the details ahead of the 2022 Shergar Cup at Ascot this Saturday including those all-important jockey profiles.

The Dubai Duty Free Shergar Cup is the world’s premier jockeys’ competition where four riders in each of four teams - Great Britain & Ireland, Rest of the World, Ladies and Europe - battle against each other.

This is the 21st edition Dubai Duty Free Shergar Cup at Ascot, with record prize money of £550,000. All races offer free entry and are limited to 10 runners, with two or three jockeys from each team. Subject to full fields, each jockey has five rides across the afternoon.

If there is a non-runner which cannot be replaced by a reserve, 4 points will be awarded both to the team and jockey missing out on the ride. If a dead-heat occurs in a race, the points for the two places are added together, divided by two and shared between the two jockeys/teams.

The team with the highest total after race eight lifts the Dubai Duty Free Shergar Cup, while the jockey amassing the most individual points will take home an additional £3,000 plus the Alistair Haggis “Silver Saddle” trophy.

One jockey will receive the Dubai Duty Free Ride Of The Day Award. If there is a tie for the Team or Silver Saddle competitions, there will be a countback on the number of winners and the team/jockey with the most winners will be adjudged the winner overall; if they are still level, then second places will be counted, then if necessary third places and then if necessary fourth places. If they are still level, there will be joint winners.

A total of £25,000 worth of bonus prizes will be awarded for the leading stables based on points accrued in the competition, split as follows:

What they say: "I was supposed to come back for the Shergar Cup in 2020 but obviously the pandemic shut everything down. I think it must be five years since I last rode here, so it feels great to be back.

“I love this event and the novelty of it all. The international element is amazing and it is something you don’t find unless you are in a competition like this. The team aspect creates a special camaraderie.”

Asked about the achievements of Rachael Blackmore and Hollie Doyle since her last appearance at Ascot, Wilson said: “I have been following Rachael closely. Being a trailblazer means you are the first, and that is what she is. And the same can be said about Hollie [Doyle] on the Flat. What I have liked is the shift in conversation, moving away from talking about gender. People just see them as very good jockeys. That is a testament to the firsts that we have all achieved, whether it be Hayley [Turner], myself, Rachael and now Hollie. Twenty years from now, will people even talk about gender when women are winning big races? I suspect not but there are still a lot of firsts out there that need to be done.

“I am still motivated by riding good horses. That is what it boils down to. You can ride countless races through the year, but when you come across a real good horse, that is what it’s all about. It is not just about the talent of these horses but the mental capacity too. The really good ones know what they are doing and you are able to form a special connection with them.”

THE REST OF THE WORLD

What they say: "I think it has been 10 years since I last had a ride at Ascot. I have had a month off and there is no better place to get back in the saddle than here. Every time you race here, there is an excitement because you know it is an important occasion – you are competing against the best horses and the best jockeys in front of a great atmosphere.

“I am really looking forward to the Shergar Cup. We have a strong team made up of experience, with myself and Kerrin, and then the two young guns in Jason and Takeshi. I think it will be a nice combination as we try to win the title, and Kerrin’s experience will be very important. He is a top-class jockey and has enjoyed a lot of success in England.”

Having won multiple Group One races across Europe, Lemaire moved to Japan full-time in 2014 and won the first of five successive jockeys’ championships in 2017, making him the first foreign rider to take the title.

He explained: “I had a chance to ride for the biggest owners in France. I had contracts for the Niarchos Family, Gerard Augustin-Normand and H H the Aga Khan. I worked very hard for those chances and I was lucky enough to win big races for all of them, but then my career had to rebound and I needed a new challenge.

“I had the opportunity to move to Japan on a full-time licence and I grabbed it. It has been eight years now and I am very happy with my life in Japan. I have been champion jockey for the last five years and I guess I will be in the history books as the first foreign rider to win the championship, but I will only look back once I have retired. For now, I am looking towards the next goal, which is to have a big autumn season in Japan and potentially come back here for the Prix de l’Arc de Triomphe.”

What they say: "This is my first time at Ascot and my first time in the UK. I am really excited to be here and am appreciative of the invitation. Riding in the Shergar Cup will be a new experience for me. It is a big honour to represent Japan and hopefully I can learn a lot.

“There are a lot of jockeys in my family and I never really thought of being anything else. I started riding horses when I was 12 and have been riding competitively since I was 18. I am not satisfied with where I am yet. I want to keep riding winners and keep progressing.

“I have always said the Japanese Derby is the race I would most like to win but, since coming to the UK, I would like to win your Derby.”

What they say: “It is exciting to be back. I haven’t ridden here since 2019, when I did a little stint while William [Buick] was injured. This is a great part of the world to visit, let alone ride horses.

“The Shergar Cup is always a fun event. I am pleased that Frankie [Dettori] is involved, as he was a great ally of mine earlier in my career, and I am good mates with [Jamie] Spencer as well. I have ridden against Christophe a little bit and then Jason is a close colleague of mine back in Australia. I think we have a strong team.

“Things have been going well back home, although there is always plenty of young talent coming through, and Jason is one of them. He is in stellar form, career-best form in fact, and having those guys around keeps you on your toes. The fire is still burning and having those big winners is what keeps you motivated. It is all about putting in the hard yards to try and find these up-and-coming stars.

“Australian racing is going from strength to strength. We have seen huge increases in prize money in New South Wales, Victoria and Queensland, which is driving competition. And this at all levels, not just the top. For example, recently we were at Wyong, which is a provincial track an hour and a half north of Sydney, and maidens were running around for 40,000 Aussie dollars. It is remarkable.”

What they say: "This is my first time at Ascot and, I have to say, it is something else with the grandstand and everything. This place obviously has a bit of history, so it is pretty awesome to be here.

“The Shergar Cup is something different and I like the look of our team. I know Kerrin McEvoy very well from back in Australia, and then Christophe and Takeshi are coming off great seasons in Japan as well. Hopefully, we pick up some good rides.

“My career has been a slow, gradual progression. I have been in Sydney for nine or 10 years now, but the last two or three years have moved my career on an upward spiral. That is what I am after and hopefully it can keep evolving. I am always trying to improve and the quality of horses I am riding has steadily improved as well. It has been a natural progression.”

Through his association with trainer Chris Waller, Collett rode Winx five times early in her career, including wins at Warwick Farm and Rosehill.

He said: “I rode Winx for her first couple of wins, but she was a different animal then to the one she became. I don’t think I was throwing any superlatives out there when I got off her, other than that ‘that was pretty good!’ I have said it before, but I would have loved to have ridden her again towards the end of her career. The acceleration she had was unbelievable. It was a shame she never came over to Royal Ascot, as I have no doubt that she would have been ultra-competitive. Our sprinters are very strong but to bring a middle-distance horse up here is probably the next step for Australian racing.”

How the horses are allocated