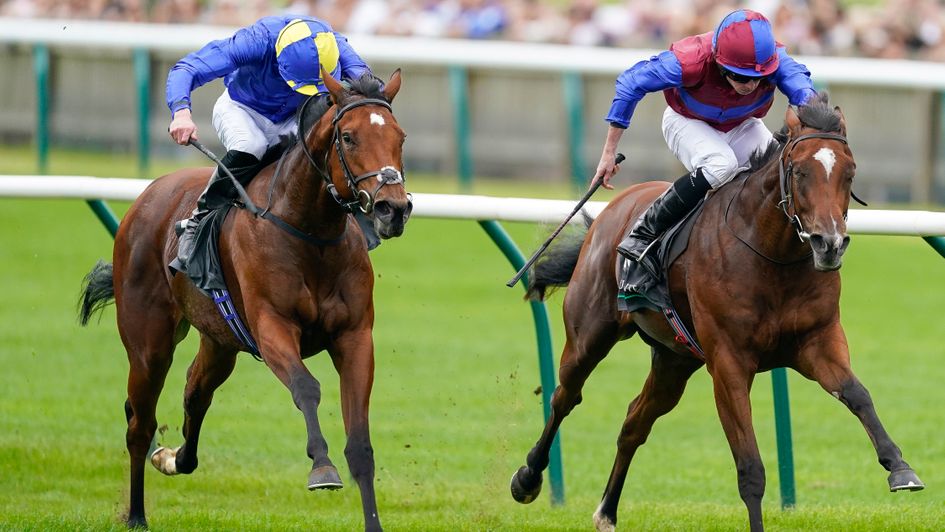 Tenebrism (right) was brilliant in the Cheveley Park

Ben Linfoot ranks the Classic prospects of five horses that won at Newmarket and the Curragh on an informative Saturday afternoon.

1. The wow factor I: Tenebrism

Performance of the day? It should be a tough one given the talent that was on show but I’ve no hesitation in nominating TENEBRISM for the honour as she came from last to first to land the G1 Juddmonte Cheveley Park Stakes in remarkable style.

Even if winners were coming from off the pace at Newmarket on Saturday in a way they hadn’t been earlier in the meeting, this was still breathtaking stuff from the daughter of Caravaggio, as she had six lengths to make up on the front-running Flotus at the two-furlong marker with a wall of horses in front of her.

Ryan Moore finessed a flourishing challenge out of Aidan O’Brien’s filly in the final quarter mile, though, assisted by the stands’ rail and only a moderate right-hand drive, with momentum out of The Dip helping his mount wear down Flotus with more to spare than the winning distance of a length suggests.

On just her second start, this was eyebrow-raising stuff and it was no surprise to see the layers cut Tenebrism to a general 8/1 for next year’s QIPCO 1000 Guineas.

She might have the speed from her sire but her dam, Immortal Verse, was a dual G1-winning miler as a three-year-old, although she was withdrawn from her 1000 Guineas at Newmarket after being unruly in the stalls.

Perhaps 11 years on Tenebrism can gain compensation of sorts in 2022. She’ll have to prove herself over two furlongs further and she’ll have to become O’Brien’s first Cheveley Park winner to follow up in the 1000 Guineas, as well, but she could hardly have been more impressive in her first G1 on just her second start. 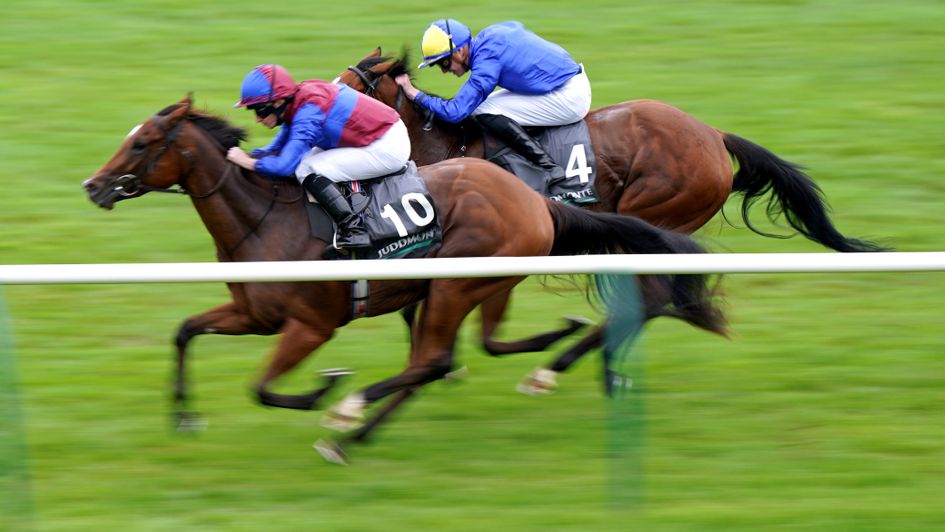 Five minutes after Tenebrism won the Cheveley Park the same blue and purple silks of George von Opel’s Westerberg venture with The Lads were being carried home by LUXEMBOURG for Aidan O’Brien - who was winning a staggering 21st Beresford Stakes at the Curragh.

On this evidence the son of Camelot could even be a 2000 Guineas colt, but it was the Cazoo Derby market in which he barged his way to joint 10/1 favouritism with stablemate Point Lonsdale.

👀 He's won it with some pretty decent ones down the years, too! pic.twitter.com/SLovJFi0Nr

I’d rather back Tenebrism for the 1000 Guineas at 8s than Luxembourg for the Derby at 10s, as this ranking system suggests, but there’s no doubt he’s an exciting colt for middle-distances at three as befitting his pedigree.

There is a word of warning. None of O’Brien’s 20 previous Beresford Stakes winners went on to win the Derby at Epsom, although St Nicholas Abbey, Capri, Saxon Warrior and Japan all amassed several G1s between them.

Luxembourg looks a horse destined for the top level. The 10/1 Derby quotes don’t really appeal with that O’Brien-Beresford-Epsom record in mind, but I wouldn’t mind seeing what the bookmakers think of his Guineas chances (currently unquoted, but it’s worth keeping an eye on how that develops).

How on earth did ROYAL PATRONAGE win the G2 Juddmonte Royal Lodge Stakes? It looked for all money like we’d be hailing Coroebus as the next big thing off the Charlie Appleby-Dubawi conveyor belt – and he still might be – but the superlatives have to be reined in just as he was inside the final furlong.

For seven-eighths of the contest Coroebus was the dominant horse in this race and he stretched four lengths clear coming out of The Dip, but the rising ground seemed to turn his legs to jelly just as Royal Patronage got a second wind.

Mark Johnston’s horse rallied tenaciously and though he needed the leader to wilt in front, this was still a highly-encouraging performance with his three-year-old career in mind.

He could take in the Guineas or a Derby trial or both according to his trainer, but if we’re talking Classics perhaps the extended 10 furlongs in the French Derby would offer him his best chance of glory.

Wootton Bassett’s best progeny, Almanzor and Audarya, excelled over that trip and Royal Patronage’s dam was a 10f winner, too. That could be his optimum and his exploits over 7f and 1m at two certainly bode well with his 3yo middle-distance career in mind.

As for Coroebus, Appleby blamed loneliness and idling for his unlikely defeat. He could well be the best long-term prospect in the race and he might get the chance to prove that he’s learnt from it in the Vertem Futurity at Doncaster next month.

4. The out and out sprinter: Perfect Power

What do you see when you watch PERFECT POWER? On his pedigree and the way he finishes his races you might think a Guineas colt and he was cut to as short as 10/1 for the spring Classic in the aftermath of his Juddmonte Middle Park win.

Richard Fahey might be thinking the same way, with Lydia Hislop coaxing the D-word out of him at Newmarket, and if he takes in the Dewhurst and runs well it will be hard to resist a Guineas tilt in 2022.

But he looks cut from a similar cloth to his sire, Ardad, to me, a rapid juvenile sprinter who won the Windsor Castle and Flying Childers over five furlongs at two. Perfect Power has been winning his races thanks to a quick change of gear and he did well to land the Middle Park in the centre of the track from stall one given the rail bias we’ve seen all week.

His class helped him defeat an ordinary field, but there’s no doubt he’s the best sprinting juvenile around. Stronger stayers might be too powerful for him in the Dewhurst, but it would be an interesting experiment and add an extra layer to the year-end juvenile pecking order.

As for 2022, he’ll have to prove he’s trained on, as his sire didn’t. As a juvenile he just looks better and better, but is he a Classic prospect? I’m not sure. The C-words – as in Commonwealth Cup – are a different matter and it’s no surprise to see him head that particular market with the few bookies betting on the Royal Ascot race.

This year’s renewal has a lot to live up to, then, but it featured some nice types in the top five home and none more so than the winner, MISS CAROL ANN, who made a striking debut under Andrea Atzeni. She knew her job, always travelled well and showed the sort of turn of foot one has become to associate with progeny of her sire to seal the race in style.

Taking into account the other two-year-old races on the card, she took Kingman’s record with his juveniles on the Rowley Mile in September and October to 8/22 at 36% (he has a 23.57% strike-rate at all tracks in the same months) so the indications are his best stock is being aimed at HQ in the autumn. Incidentally, Kingman’s 2yo newcomers at HQ in September/October are now 6/10 at 60% to a level-stakes profit of +40.16, so it’s a system to keep an eye on/take advantage of!

Saffron Beach went on to win the G3 Oh So Sharp Stakes back on the Rowley Mile just under two weeks later last year and Miss Carol Ann could bid for the same double, trainer Roger Varian saying that “it can come a bit quick for them. I’m not going to rule it out or in. We will just have to see how she is in the next week or so.”

Whether she runs in the Oh So Sharp or not, Miss Carol Ann looks a nice prospect for next year and she should get a mile. We’d get a better handle on her Guineas prospects if she did turn up at Newmarket for the G3 contest in a fortnight.

Of those in behind, the third home, Flamenco Fan, a half-sister to Middle Park winner Charming Thought, shaped well with a view to her stepping up in trip next year for trainer David Menuisier, while sixth home Ultra Chic will be another to note when she steps up in distance.