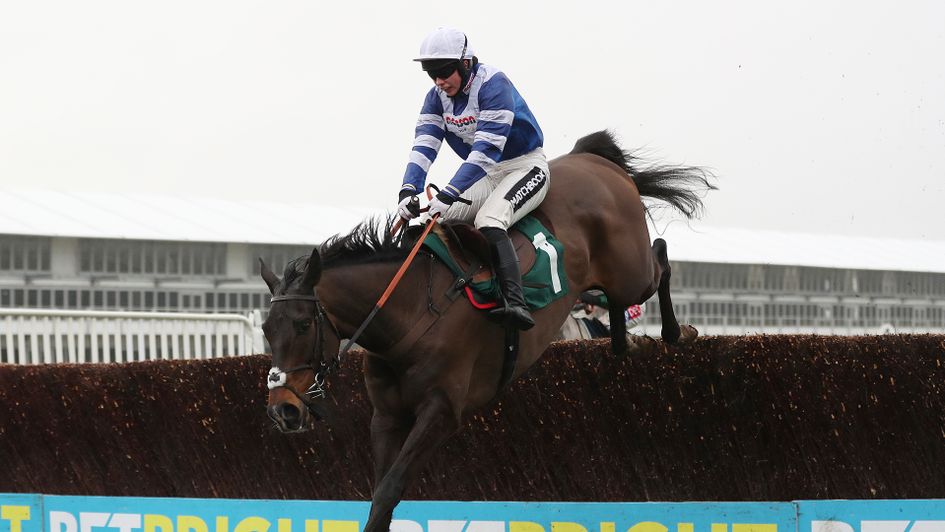 Bryony Frost and Frodon returned to winning ways with a typically game performance in the Unibet Silviniaco Conti Chase at Kempton.

The pair created headlines in the Ryanair Chase at last season's Cheltenham Festival, as Frost became the first female rider to win a Grade One chase at the big meeting.

However, the first half of this campaign had not gone to plan for either, with Frodon disappointing in his two runs and Frost finding winners a little harder to come by.

Adopting their usual position at the head of affairs, Frodon looked a sitting duck as Daryl Jacob loomed up on the favourite Top Notch, with Keeper Hill also not out of it, but the race changed in a matter of strides.

As Frost asked for more, Frodon (5/4) quickened and caught Top Notch flat footed and by the last fence it was Keeper Hill who was the main danger.

Paul Nicholls' Frodon is nothing if not game, though, and was foot perfect at the last, coming away to win by a length and a quarter.

Frodon was treated for ulcers after his latest run at Haydock and connections were delighted to see him back on form.

With Nicholls on his annual holiday, assistant trainer Harry Derham said: "His ulcers were quite bad to be honest. We had to treat them. That was nice and was a bit more like it today.

"He jumped out to the left which wasn't ideal. We will go for the Denman Chase next, then go from there. Paul had it in his head to go to the Denman Chase after this and that is what we will do. He is in the Ryanair and the Gold Cup.

"He is a fairly genuine horse, but he is probably getting a bit cute in his old age as a couple of times he was just flicking his ears.

"Every time one got to him, he kept going. He probably made life a bit hard for himself just shifting out to the left, but it is good to get him back winning again.

"It has not been testing (at home), we just gastroscoped him after the Betfair Chase as Paul felt we were missing something and fortunately that showed up and we sorted that out. He is now back to good form.

"I am of the belief there is more to come from him. I said earlier in the week he is in good nick, but I don't think he is as good as we can get him and I would like to think as time goes along this season, he will get better."

😍 Frodon is back on song with a gutsy display at Kempton...pic.twitter.com/jZ1szNi0Bo

The Simon Munir and Isaac Soude-owned four-year-old built on his fourth at the track last time out to gain his first win in Britain when holding Lord Lamington at bay by two lengths.

Anthony Bromley, racing manager to the owners, said: "He raced too freely in his first run at Sandown. Daryl (Jacob) said put ear plugs and a hood on him.

"Daryl was out over Christmas, but Sam gave him a lovely ride the last day and he learnt a lot on his second run.

"When no one wanted to make the running today, he was more tractable and though he took a hold, he was able to go from the front. He jumps nicely and we always hoped he might progress.

"I don't think he is a Triumph Hurdle type, but he might be a Festival horse for the Fred Winter. We might bring him back here for the Adonis as he has had two runs here now."

David Maxwell celebrated one of the easiest winners he is likely to partner as Saint Xavier continued his preparations for a potential tilt at the Grand National with a 36-length success in the 32Red.com Novices' Hurdle.

Maxwell said of the 8/15 winner: "He was a proper horse in France and was rated 150. He was just too free at Cheltenham and didn't get home.

"The National was the plan. He wants a trip and is a good jumper. He will definitely have an entry - hopefully Paul will remember!"

Lizzie Kelly thanked her half-brother Chester Williams as Erick Le Rouge (7/2) got his career back on track over fences after prevailing by three-quarters of a length in the Unibet Download The App Handicap Chase.

Kelly said: "Chester got off him today as he wanted me on him, so thanks to him for that.

"It was the first time I had ridden him since he was a juvenile and he was a bit different today. I schooled him in the week and we got on really well.

"Coming past the stands I said 'it's time to go' and he needed a couple of reminders, but he kept at it and where other horses get racing early and don't get home, he can finish."

Never Adapt too good in finale

Never Adapt showed she retains plenty of talent despite not being the easiest of rides after claiming the Download 32Red Casino App Handicap Hurdle by three and a quarter lengths to complete a double for trainer Nicky Henderson, who also struck with Burrows Edge in the Lanzarote Hurdle.

The Seven Barrows handler said of the 5/4 winner: "The boys have done brilliantly with her at home because she can pull. She must hold the track record for a mile at Cheltenham.

"Even there again, she was still too keen and we have got to teach her to do it (settle) and that is why you have got to drop her in like that.

"Another race like that will do her the world of good."