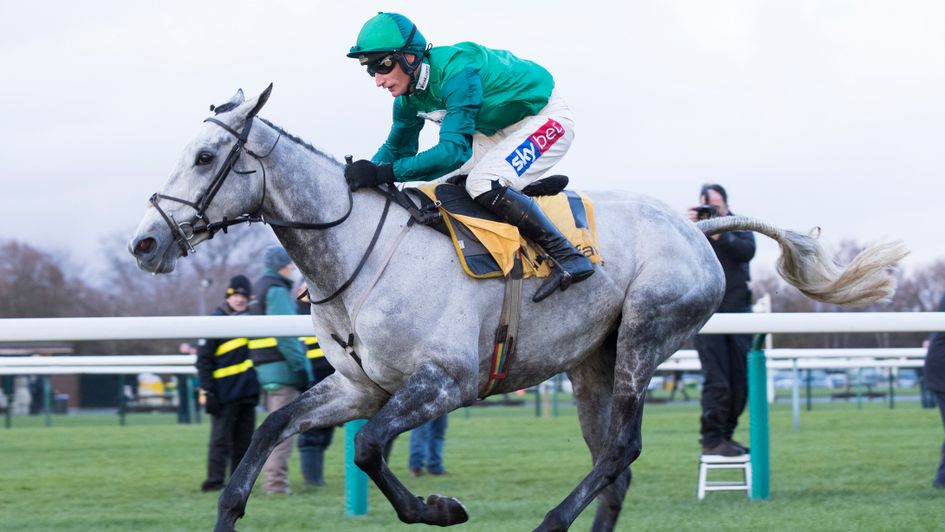 Adam Houghton charts the career of Bristol de Mai ahead of his bid for a fourth Betfair Chase success at Haydock on Saturday.

Nicknamed ‘Haydock de Mai’ by some, thanks to his exemplary record (five wins from six starts) at the Lancashire track, Bristol de Mai has nonetheless shown that he is far from a one-dimensional chaser. Overall, Bristol de Mai has won 11 of his 36 races so far, with his victories away from Haydock coming at six different venues.

Bristol de Mai won a newcomers’ hurdle at Auteuil as a three-year-old for Guillaume Macaire before Simon Munir and Isaac Souede bought him and sent him to Nigel Twiston-Davies, for whom he won over hurdles at Chepstow (Finale Juvenile Hurdle) on his first start for the stable. His other four wins have come over fences at Warwick, Leicester, Sandown (Scilly Isles Novices’ Chase) and Wetherby (Charlie Hall Chase), which, along with his third in the 2019 Cheltenham Gold Cup, illustrate that he has shown plenty of good form on a variety of courses.

Despite this Bristol de Mai arguably doesn’t get the recognition he deserves and, such is the fixation with the major spring festivals, the fact that he is yet to register a win later than February in a career spanning seven full seasons in training in Britain is possibly one of the main reasons why. There is no debating his status as a top-class chaser, though, particularly when the mud is flying at Haydock.

Remarkably, Bristol de Mai’s first three wins at Haydock – all on going described by Timeform as soft or worse – were achieved by a cumulative margin of 111 lengths, including a 57-length success when making his first appearance in the Betfair Chase, the record winning margin for any Grade 1 race over jumps in Britain. He has now three of the last four editions of the Betfair Chase and on Saturday he gets the opportunity to tie with Kauto Star as the most successful horse in the race’s history.

It’s perhaps the best compliment we can pay Bristol de Mai that he wouldn’t look out of place on that list having carved out an impressive career up to this point. 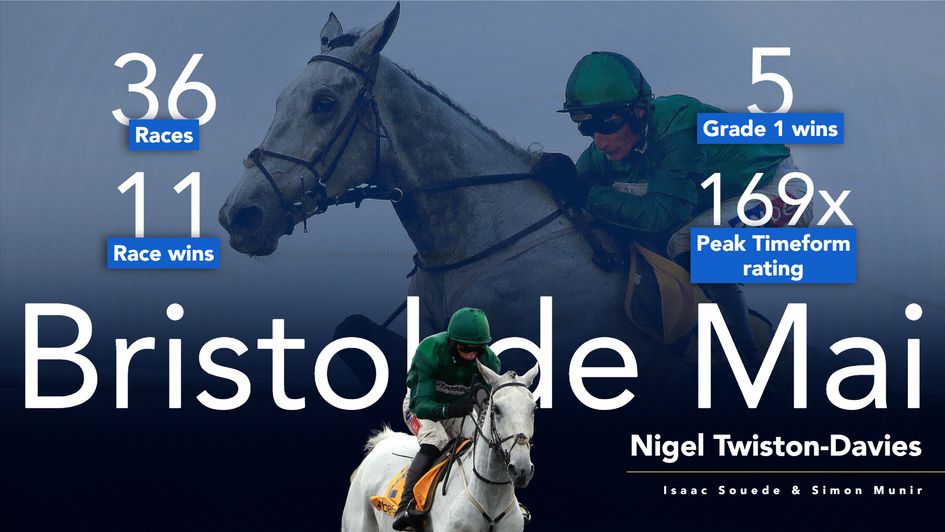 After starting his career in France, Bristol de Mai made an impressive start to life on these shores when winning the Finale Juvenile Hurdle at Chepstow, quickening clear in the straight to land the spoils by six lengths in taking style. He failed to win again that season but still ran close to his best on each of his three starts, ending the campaign with a creditable third in the Anniversary Hurdle at Aintree.

Bristol de Mai looked the type to progress – particularly when tackling fences given his physique and demeanour – and he duly developed into a smart novice chaser in his second season. His four wins (from eight starts) included a 32-length rout in the Altcar Novices’ Chase on his first visit to Haydock, ploughing through the mud as he left his four rivals trailing in his wake from three out.

Bristol de Mai also won the Scilly Isles Novices’ Chase at Sandown before posting his best performance when filling the runner-up spot behind Black Hercules in the JLT Novices’ Chase at the Cheltenham Festival.

Bristol de Mai recorded only one win from six starts in 2016/17, but what a win it was as he made it two from two at his beloved Haydock. Lining up from a BHA mark of 154 in the Peter Marsh Chase, Bristol de Mai produced a top-class performance on soft going to win by 22 lengths, the only one still galloping at the finish after travelling strongly all the way.

The sceptics were still keen to see whether Bristol de Mai could reproduce that level of form away from Haydock, however, and those voices only grew louder after he failed to match that effort in three subsequent starts, including when seventh in the Cheltenham Gold Cup.

Bristol de Mai started a short-priced favourite for his first Betfair Chase having defied a 6 lb penalty to win the Charlie Hall Chase at Wetherby three weeks earlier, when digging deep to beat stablemate Blaklion by half a length.

In bottomless ground at Haydock, Bristol de Mai was in command a long way out and he ultimately won by 57 lengths from Cue Card (who was himself trying to equal Kauto Star’s four Betfair Chase victories). The extreme conditions may have exaggerated his superiority with none of his rivals giving their true running, but he still deserved plenty of credit for maintaining a relentless gallop and for winning without coming off the bridle.

In a recurring theme, Bristol de Mai came up short on his final three starts of the campaign, but he did at least get back on track after two disappointing efforts when chasing home Might Bite in the Bowl Chase at Aintree. 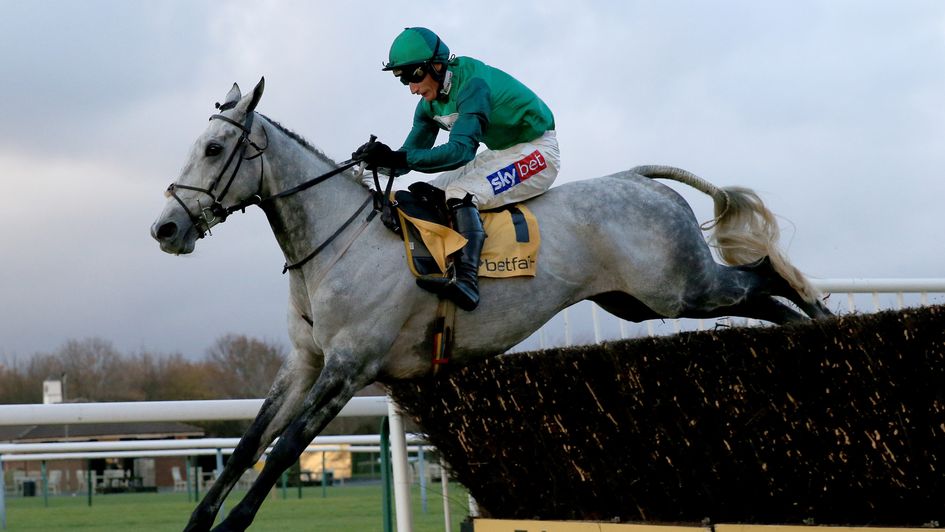 An unseasonably dry autumn left conditions for the Betfair Chase much less testing than they usually are and there was some speculation that Bristol de Mai might miss the race. His participation was eventually confirmed but he started only third favourite on the day behind Native River and Might Bite, first and second, respectively, in the previous season’s Cheltenham Gold Cup.

In the race itself, Bristol de Mai didn’t dominate his rivals in the same way as 12 months earlier, but he was still well on top at the finish after asserting between the final two fences, ultimately winning by four lengths from Native River.

Bristol de Mai went on to post one of his best efforts away from Haydock when third behind Al Boum Photo in that season’s Cheltenham Gold Cup, bouncing back from a heavy fall in the King George at Kempton on his previous start. He ended the campaign with a career-high Timeform rating of 169x – the ‘x’ underlined that he often made mistakes in his races, though. 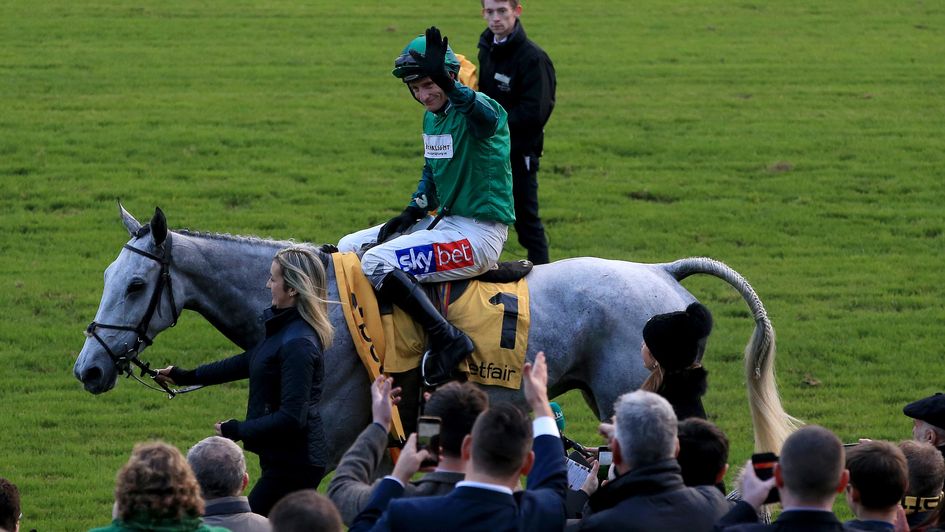 Bristol de Mai forfeited his unbeaten record at Haydock when seeking a hat-trick of wins in the Betfair Chase, but he still performed close to his very best as he passed the post just a length and a half behind the winner, Lostintranslation. It developed into a gripping battle between the pair and Bristol de Mai simply couldn’t match Lostintranslation’s turn of foot late on after setting just a fair gallop.

Having missed the King George, Bristol de Mai then filled the runner-up spot for the second start in a row in the Cotswold Chase at Cheltenham, once again showing top-class form to make Santini (who received 2 lb) pull out all the stops. In another brief campaign, he signed off with a below-par effort when only ninth in the Cheltenham Gold Cup.

Bristol de Mai belatedly narrowed the gap to Kauto Star’s record of four successes in the Betfair Chase with a trademark performance. On heavy going, he was immediately sent to the front by Daryl Jacob – in the saddle for all but one of Bristol de Mai’s 33 starts in Britain – before gradually turning the screw on the home turn, essentially outstaying Clan des Obeaux in the straight as he kept going well to land the spoils by two lengths.

The ‘x’ was removed from Bristol de Mai’s Timeform rating on the back of that effort, just reward after a series of better displays in the jumping department. Admittedly, he made mistakes when pulled up in the Grand National at Aintree on his final start, but it was otherwise another solid campaign having finished second in the rescheduled Cotswold Chase at Sandown on his only other outing.

"Bristol de Mai has been massive for my career. He’s been there with me from the start with the likes of Sceau Royal, Top Notch and L’Ami Serge. They all came when I started my relationship with Simon [Munir, joint-owner], Isaac [Souede, joint-owner] and Anthony [Bromley, racing manager]. Every year they’ve produced the goods, even as they get older, and they’re just very, very special horses.

"I think what makes Bristol de Mai so good at Haydock is that he’s got a big stride and he’s a brilliant jumper. You need that around Haydock and it’s a flat track which he likes. It’s flat and it’s left-handed which helps because at home he prefers leading on his near fore.

"I think softer going suits him better now that he’s a bit older, he’s definitely lost a bit of the speed he had. He’s very good, very tough, and just a relentless staying chaser. Over three miles around Haydock he can go a really good gallop from start to finish.

"I think his second Betfair Chase when he beat Native River and Might Bite was his best win. The ground was good, everyone thought it was basically a two-horse race and they completely underestimated Bristol and how good he was. That was a brilliant day.

"I think this could be his toughest test on Saturday and it will have to be a monumental effort for Bristol de Mai to win the race. There are going to be some great horses in it, the likes of A Plus Tard and Champ. This is right up there with the best of the races he’s he been in and it should be really exciting." 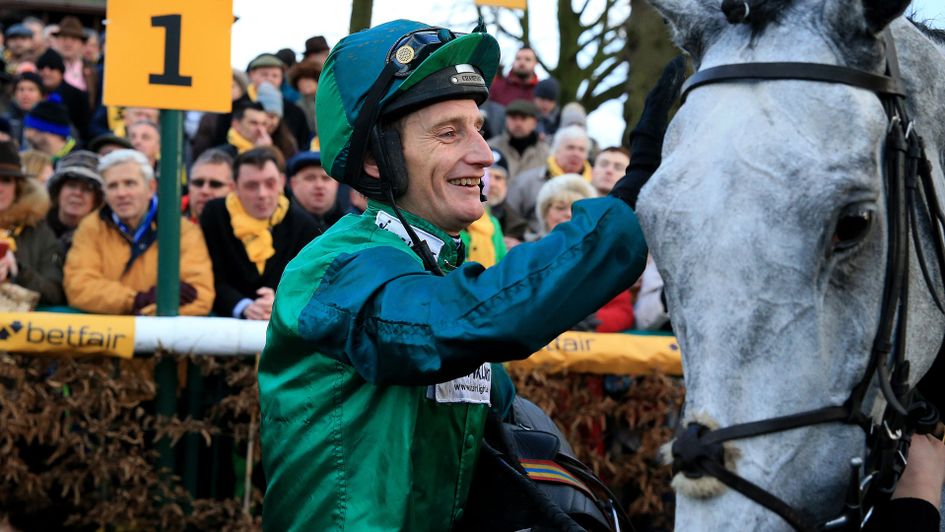