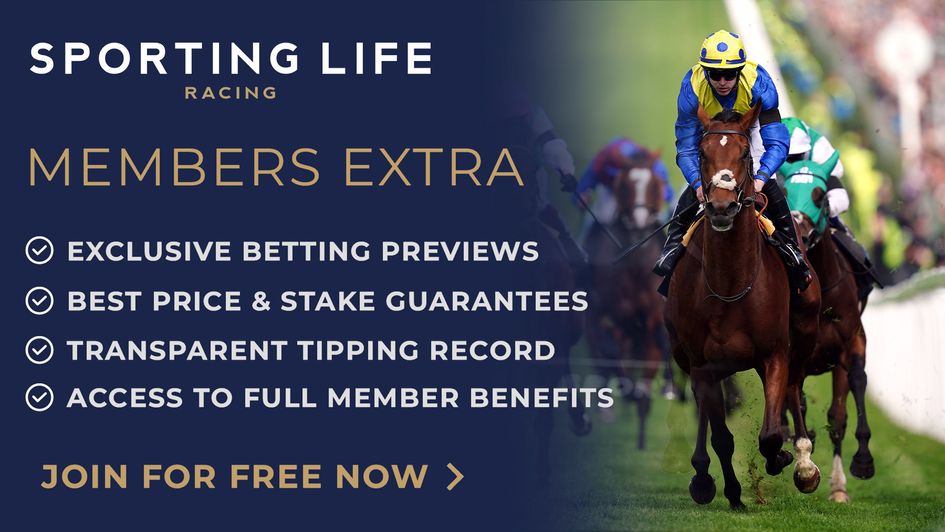 Sporting Life continues the series of weekend tipping articles exclusively for our members with Matt Brocklebank's best bet on Sunday.

He also had two 14/1 winners (Lord Riddiford and Prairie Falcon) at this year's Qatar Goodwood Festival, helping him to over 135pts profit to recommended stakes so far in 2022, and he supplements the usual column and antepost previews with his take on the pick of the Sunday action, whether that's a Group One in France or a low-key day closer to home.

The market for today’s Prix Jacques le Marois initially suggested Coroebus was the horse to beat and I was in no way surprised by that intimation. He was top of the list, personally, of colts destined for stardom in mile races of 2022 heading into the winter after a striking juvenile campaign, and he’s not let anyone down in winning the 2000 Guineas at St James’s Palace.

Newmarket was rather stylish and while needing to get down and dirty when seemingly not at his best at Royal Ascot, he still emerged on top which speaks volumes. In terms of bare form, Charlie Appleby’s Dubawi colt isn’t miles clear of these rest, though.

Inspiral - the major gamble of the race today and now clear favourite at a general 7/4 - was considered the key British filly of the current Classic generation at the start of the year and there have, admittedly, been bumps in the road, but she remains a brilliant prospect based on her sparkling Coronation Stakes success, despite having to miss the Guineas in the spring.

She did look like she might benefit from a step up to 10 furlongs when beaten by the tough (and reopposing) Prosperous Voyage (12/1) in the Falmouth Stakes at Newmarket, though, and for me it’s just too hard to gauge which Inspiral we’ll see today following another short break.

It may seem almost counter-intuitive after suggesting Inspiral could need further but I can’t help thinking STATE OF REST is the one with the raw ability to trouble both market principals, and he surely represents the value in the race at 11/2 having done it in Britain, America, Australia and France already – as well as winning quality races on home soil in Ireland.

The decision to target a European Group One over a mile may ultimately be based on commercial grounds, given the value it would add to his future stallion prospects, but he was a six-furlong winner on debut just two summers back and first broke into the big league with a top-level win around the seriously sharp nine and a half furlong at Saratoga 12 months ago.

The ground was firm there and he’s subsequently shown himself to be versatile in terms of ground - as well as distance - so going described as ‘good’ in France (some rain due very close to the scheduled off-time of 2.55) won’t be a problem.

Last seen winning the Prince of Wales’s Stakes at the Royal meeting (good to firm), in which a well-timed injection of pace from jockey Shane Crosse effectively won the day, he’s going to be seriously dangerous despite the drop in distance at Deauville, where prominent-racing overseas horses have been dominating the biggest events throughout their summer festival.

At current odds, I can’t let him go unbacked against the highly-regarded three-year-olds.

Age should be no barrier much closer to home too in Pontefract’s Moor Top Farm Shop Hemsworth Handicap.

This marathon has only been won by one three-year-old in the past decade, the recent roll of honour featuring a nine-year-old, one eight-year-old and two seven-year-olds.

FLINT HILL is a relative spring chicken at six and he’s a genuine course specialist to boot, having won here twice and also filled the runner-up spot at Ponte on a couple of occasions as well.

One of those seconds came in this corresponding contest last August when rated just 1lb lower than his current mark of 70, and we know he can defy that given his last triumph in West Yorkshire came off 71 in September.

He was beaten under four lengths in a 10k-to-the-winner 0-80 contest at York last month, having gone really close here on his penultimate start, so he still looks in good order, and I certainly wouldn’t have him as the third/fourth most likely winner in this five-runner field, especially as most of the others tend to hit worrying flat spots whereas the selection is generally a smooth traveller.

He should be backed accordingly.

Exclusive content, stats, tips, my stable, race replays, hospitality give aways and much more… All for FREE - No monthly subscription fee