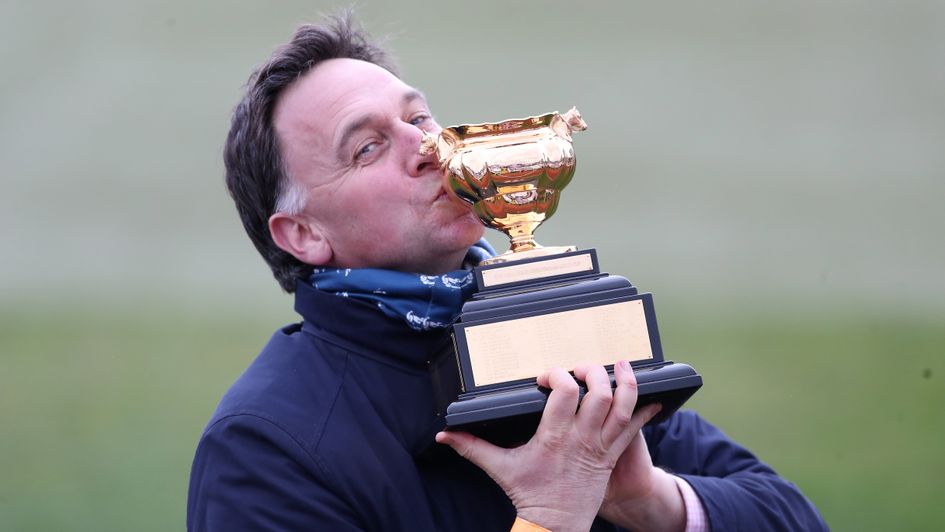 John Ingles charts the phenomenal rise of Henry de Bromhead, the Irish trainer who dominated the major prizes in Britain last season and is set to saddle A Plus Tard in Saturday's Betfair Chase.

Willie Mullins has dominated jumps racing in Ireland - not forever, as it can sometimes seem - but certainly for much of the current century. In 2020/21, he was crowned champion for the fourteenth season in succession and the fifteenth time in all. But some of those championships have been close-run affairs thanks to the rapid rise of Gordon Elliott over the last decade or so who had, at least until recently, emerged as the clear number two in the ranks of Irish jumps trainers. In fact, such was the dominance of Mullins and Elliott in the 2017/18 season, when each trained more than 200 winners, an unprecedented total in an Irish season, that they cleaned up in around 30% of all jumps races in Ireland and won three-quarters of the country’s Grade 1 races as well as more than half of the races at the Cheltenham Festival.

But behind the top two, a third force in Irish jumping has steadily been gathering strength which has the quality, if perhaps not quite the weight of numbers, to challenge Mullins and Elliott. Henry de Bromhead took over the running of his father Harry’s stable and was successful with his very first runner, Fidalus, at Tramore on New Year’s Day in 2000. For most of the first decade of the 21st century, De Bromhead was registering single-figure totals each season but when he broke into double figures for the first time in 2007/08, his dozen winners in that campaign included a contribution from the trainer’s ‘horse of a lifetime’ who ‘had a great impact on showcasing our business.’

That horse was top-class hurdler Sizing Europe, successful that season in the Greatwood Hurdle at Cheltenham before thrashing the former dual Champion Hurdle winner Hardy Eustace in the Irish version of that race at Leopardstown to give the trainer his first Grade 1 winner. That resulted in Sizing Europe being sent off the 2/1 favourite for the 2008 Champion Hurdle but he went from looking full of running approaching two out to fading so badly that he finished a tailed-off last. After that initial bitter disappointment, Sizing Europe returned to Cheltenham two years later to become De Bromhead’s first Festival winner in the Arkle and then added the Queen Mother Champion Chase in 2011.

Sizing Europe belonged to one of De Bromhead’s most important supporters early on, British-based owner Alan Potts, but his decision to move his horses elsewhere in the autumn of 2016, by which time Potts owned a much larger string with his wife Ann, was a potential blow to the stable’s ambitions. The biggest loss proved to be Sizing John who had been runner-up in the Arkle earlier in the year. Switched to Jessica Harrington, he completed a Gold Cup hat-trick at Leopardstown, Cheltenham and Punchestown later that season.

But there was no stopping the progress of De Bromhead’s County Waterford yard. In the 2015/16 season it achieved two significant firsts, reaching third place behind Mullins and Elliott in the Irish trainers’ championship whilst breaking the million-euro barrier in prize money. Like the top two stables, De Bromhead was enjoying patronage from Ireland’s most powerful jumping owners Gigginstown House Stud by then. Identity Thief was the stable’s first Grade 1 winner for Gigginstown when successful in the 2015 Fighting Fifth Hurdle at Newcastle, while the following season the same owners’ Valseur Lido won the Champion Chase at Down Royal and Petit Mouchoir became De Bromhead’s second Irish Champion Hurdle winner after winning the Ryanair Hurdle. There was also a second Queen Mother Champion Chase for the yard thanks to Special Tiara who won it at the fourth attempt after a number of other successful British raids in the preceding seasons.

De Bromhead was one of the beneficiaries from Gigginstown’s shock decision to remove 60 of their horses from Mullins early in the 2016/17 season. Among the horses switched to De Bromhead was Balko des Flos who became the trainer’s second Galway Plate winner in 2017 and went on to be his next Festival winner when landing the 2018 Ryanair Chase. Davy Russell was on board for the latter success, but by then Rachael Blackmore had ridden her first graded winners for the stable and she registered her first winners at the Festival the following year on the De Bromhead-trained pair A Plus Tard in the Close Brothers Novices’ Handicap Chase and Minella Indo in the Albert Bartlett Novices’ Hurdle, marking the beginning of an increasingly successful partnership. With an ever-growing string, De Bromhead set another personal best for number of winners in Ireland in 2018/19 with a total of 98.

Fortunately for De Bromhead, he was reasonably well protected from Gigginstown’s next bombshell, when owner Michael O’Leary announced at the end of that campaign his intention to scale back and eventually wind up his massive operation over the course of the following seasons. That was because De Bromhead had succeeded in attracting new, big-spending owners, to his stable. They included A Plus Tard’s owners Cheveley Park Stud (De Bromhead had served as an assistant to one of Cheveley Park’s Flat trainers Sir Mark Prescott) and ‘rich list’ members Brian Acheson, whose horses run under the ‘Robcour’ banner, and Kenneth Alexander. It wouldn’t be long before they too enjoyed success at the Cheltenham Festival.

Alexander’s unbeaten mare Honeysuckle was one of two Festival winners for De Bromhead on the first day of the 2020 Festival when she won the Mares’ Hurdle after another mare, Put The Kettle On, became the stable’s second Arkle winner after stablemate and favourite Notebook disappointed for Gigginstown. Despite the pandemic putting paid to the rest of the season, De Bromhead’s Irish earnings exceeded €2m for the first time as he regained third place in the Irish trainers’ table.

In 2020/21, De Bromhead again finished third in the Irish table whilst matching his previous best tally of 98 wins. They included Honeysuckle winning both the Hatton’s Grace Hurdle and Irish Champion Hurdle for the second year running and A Plus Tard’s victory against five trained by Mullins and three by Elliott in the Savills Chase at Leopardstown. But it was De Bromhead’s success across the Irish Sea which really made the headlines and included a remarkable haul of most of Britain’s top jumping prizes. The eight races won by De Bromhead’s horses in Britain were valuable enough to clinch him third place in the British prize money table as well, behind Paul Nicholls and Dan Skelton but in front of Nicky Henderson and Jonjo O’Neill.

Mullins pipped De Bromhead to the title of leading trainer at the 2021 Cheltenham Festival by virtue of more second places. But De Bromhead surely wouldn’t have traded that accolade for his victories in the Cheltenham Gold Cup, in which Minella Indo got the better of stablemate A Plus Tard; the Champion Hurdle, won by the still-unbeaten Honeysuckle, and the stable’s third Queen Mother Champion Chase thanks to Put The Kettle On who had also won the Shloer Chase at Cheltenham earlier in the season. There were also wins for Alexander’s Telmesomethinggirl in the Dawn Run Mares’ Novices’ Hurdle, Robcour’s Bob Olinger in the Ballymore Novices’ Hurdle and Quilixios in the Triumph Hurdle.

Not for the first time in his career, De Bromhead benefited from the fall-out from another episode which resulted in some of Ireland’s best jumpers changing stables. As a result of Gordon Elliott’s six-month ban from racing which took effect just before the 2021 Festival, Quilixios, who had been unbeaten over hurdles for Elliott, was one of the horses Cheveley Park sent to De Bromhead instead. More significant in the longer term could be the transfer of Envoi Allen, another potentially top-class chaser for the yard, who lost his unbeaten record when falling at the Festival but resumed winning ways at Down Royal recently.

As if becoming the first trainer to win the Champion Hurdle, Champion Chase and Gold Cup in the same season wasn’t enough, De Bromhead then completed an extraordinary few weeks in the spring by also saddling the first two in the Grand National, Minella Times and Balko des Flos. Both Mullins and Elliott know what it’s like to win Gold Cups and Grand Nationals and now that De Bromhead has emulated them, they’ll be keeping a close eye on their new rival, as well as each other, as the current season begins to gather pace.