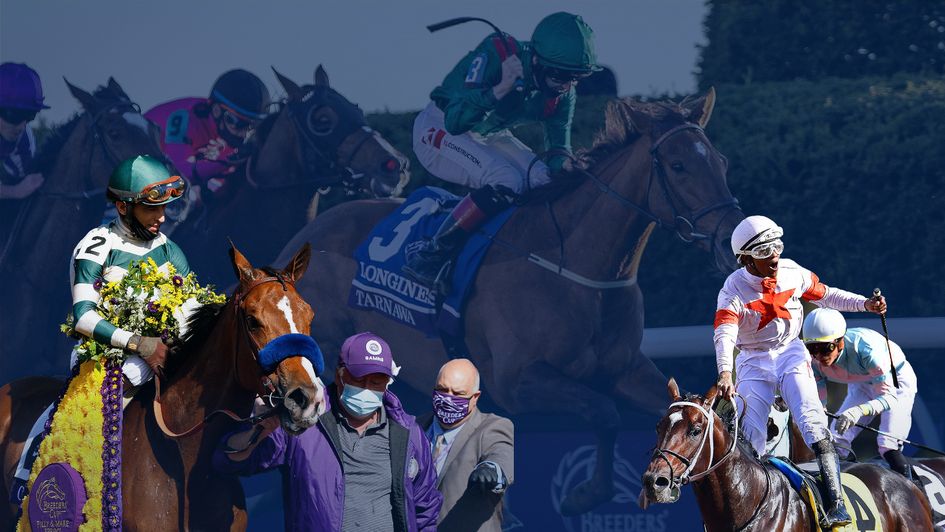 Who can you rely on to get the job done in Del Mar?

Timeform's Mark Milligan and Jake Price both join our own Matt Brocklebank in giving their verdicts on some of the supposed bankers at the 2021 Breeders' Cup at Del Mar.

BANKER: Gamine is used to dominating fields of this size and rates as a banker for me. In the three-year-old Bella Sofia, she meets a new rival who has taken giant strides in just five races. Here we’ll get to see if Gamine still has this division all to herself or not, though I’d be sticking with her. (JP)

BANKER: There’s not a great amount to say about Gamine that hasn’t already been said. She’s got a high-class level of form and speed to burn. It’s difficult to see any of this field dealing with her and if she’s on song she should go gate to wire with little difficulty. (MM)

BANKER: It’s almost crude to suggest ‘look no further’ than an odds-on shot in a championship race, but Gamine has a massive class edge over the rest of the field and can’t realistically be opposed. (MB)

BLOWOUT: In truth, I’m rather on the fence where Golden Pal is concerned. He’s had little difficulty in dealing with everything thrown at him in the US so far, and visually at least, has been very impressive. However, his poor Nunthorpe run is still fresh in the memory, and that’s the first time he encountered genuine top-level sprinters. Conditions are very much in his favour here, but on balance, I think I’d be just against him. (MM)

BANKER: This is all about speed from the gate and I fear the worst for the European challengers, despite Emaraaty Ana bringing some top-notch form at five and six furlongs to the table, and stablemate Glass Slippers having broken the hoodoo of the overseas runners in this race last year. That was at five and a half furlongs, though, and she needed every inch, whereas Golden Pal is not only a freakish speedball, he actually showed battling qualities too when bouncing back from his Nunthorpe flop back on home soil last time. He’ll be seriously hard to peg back. (MB)

BLOWOUT: A Wesley Ward sprinter with a low draw, what’s not to like? Well, he’s not for me. With both Kevin Ryan’s Group 1 winners down his inside, this is going to be tough. This has clearly been the plan all along for last year’s winner Glass Slippers, while the strong-travelling Emaraaty Ana is an improved model this season after a gelding operation. Golden Pal was rather workmanlike when winning last time, I just can’t have him at the prices. (JP)

BANKER: All of his form is on the other side of the country but other than that Jackie’s Warrior doesn’t have any negatives having successfully converted to sprinting this season after disappointing when fourth for last year’s Juvenile, and started off earlier in this campaign running over a mile too. He was pretty awesome in his prep, is clearly getting quicker and looks primed to lay down another career best which is a pretty frightening proposition for the rest. (MB)

BLOWOUT: This is a difficult one for me. Jackie’s Warrior is sure to take all the beating and is rightly a strong favourite. One of the best juveniles of last year, he’s proved a revelation since dropping in distance from a mile, winning both starts this season over six furlongs (one an extended) by an aggregate of 14 lengths. What’s playing on my mind is that there are a couple of unexposed sorts in the field, and several prominent racers, which make me believe Jackie’s Warrior is plenty short enough in the betting. (JP)

BLOWOUT: This is a tough one. Jackie’s Warrior has looked an absolute freak from a very early stage and connections finally figured out this year that he’s a sprinter. He towers up over the majority of this field with one exception – the talented Dr Schivel. Mark Glatt’s young sprinter is on a sharp upward curve and has home advantage being trained in California. I’m going to take him against Jackie’s Warrior. (MM) 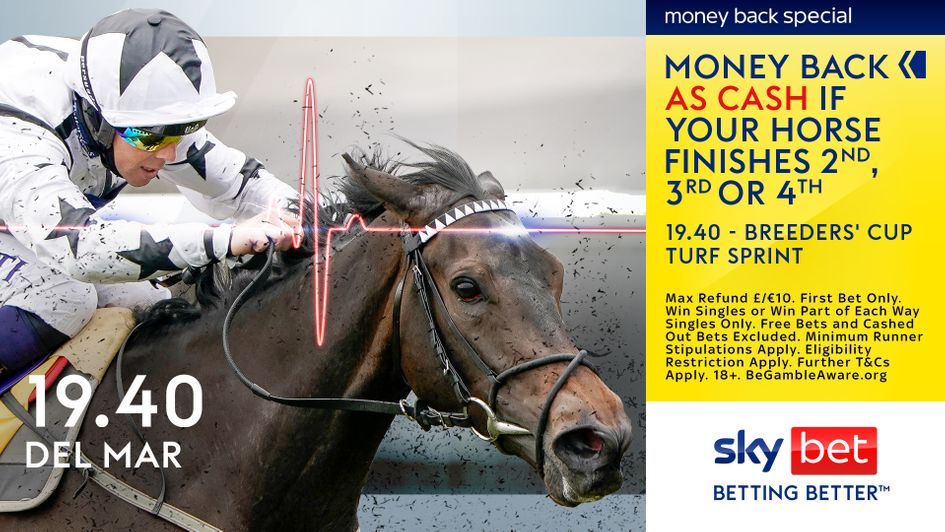 BANKER: Letruska has become the leading older filly in the US this year with a series of solid efforts. She’s not always impressive but generally just finds a way to get the job done. I’m a big fan of Todd Pletcher’s Malathaat, but she’s a proper grinder who likely won’t have enough gears to handle Letruska over this 9f trip. I’d fancy her more if she had an extra furlong to work with. (MM)

BLOWOUT: As Mark already knows, I’m a big fan of Letruska. She’s a very tough front-runner - just see her determination in the Personal Ensign at Saratoga - but she potentially faces competition on the pace in this bigger field. I also have a soft spot for Malathaat who has a bit to find on Timeform ratings, though is unfortunate not to arrive here unbeaten. The Distaff is possibly the race of the meeting for me, so I’m happy to sit this one out and enjoy with a bucket of popcorn. (OK, more like a few beers and a bowl of nuts.) (JP)

BLOWOUT: Letruska will be on just about every ticket under the sun, especially in the States, so the natural inclination is to look the other way and find one to at least challenge for top spot on value terms. I’ve landed on Baffert’s Private Mission from the inside post under Flavien Prat, who knows these turns better than most. The unbeaten filly has winning course form from the summer meet and booked her spot with an impressive display in the Zenyatta up the coast at Santa Anita. It’s hard to know just how much potential she brings to the table and for that reason I’m more ‘layer’ than ‘player’ when it comes to the fav. (MB) 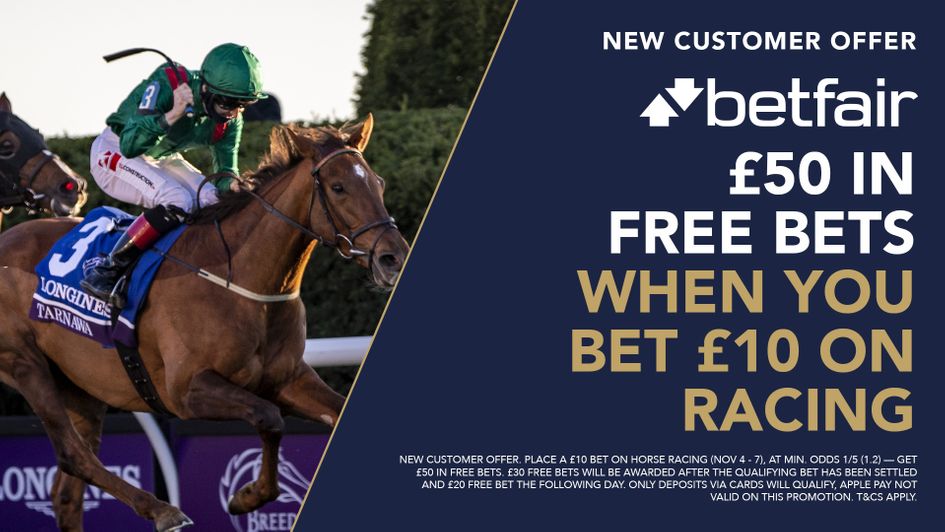 BLOWOUT: A high draw and a short run to the first turn makes things extremely hard for Dermot Weld’s filly. Campaigned specifically in a bid to retain her Turf title, she’s clearly returned as good as ever as testified by her efforts in the Irish Champion and Arc. Domestic Spending looks best of the home challenge, but he’s stepping up in trip, while three-year-old Yibir was impressive on his first taste of US racing last time. (JP)

BLOWOUT: A wide draw, tough race on bad ground in the Arc, plus not a huge amount of proven pace to chase all adds up to Tarnawa being one of the horses I’m most keen to oppose this weekend, especially around 2/1 and shorter. She’s a wonderful talent but has those questions to answer and I do feel the old boy Walton Street will have a tactical edge under a forward ride from James Doyle. He could well be a sitting duck in the straight but it’s not a long straight by any means and I think his runaway Canadian International win has definitely been underestimated. He slammed Desert Encounter off level weights there, the same horse having got much closer to Teona when giving her a stone at Windsor the time before. I’ll be happy to back the Appleby horse at all rates down to 7/1 and could have a nibble at United too at even bigger prices. (MB)

BLOWOUT: This one is purely draw-based. I’d have had Tarnawa as a banker had she fared a little better with her post position but she’s going to find it difficult to work out a decent trip from stall 13. The start is very close to one of three very tight turns on the Del Mar turf course and Colin Keane will need all his expertise to figure out a way around this conundrum. (MM) 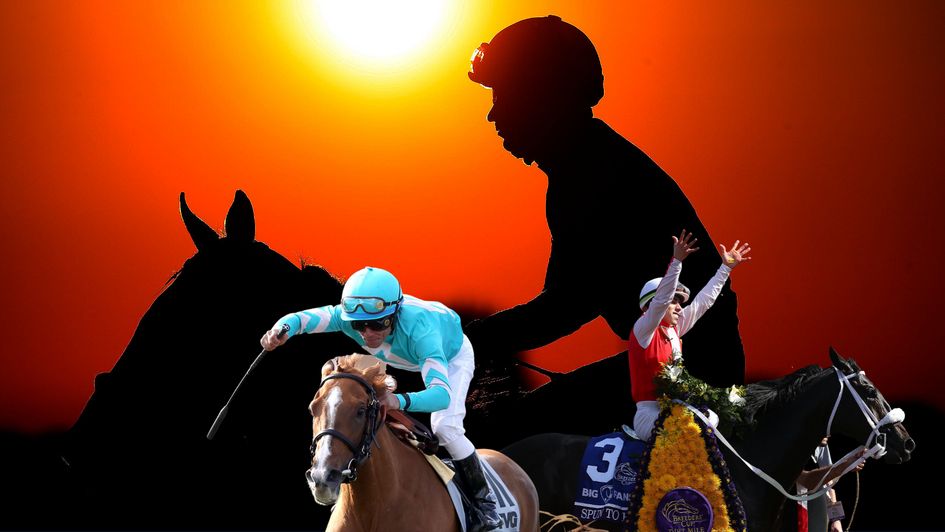 BLOWOUT: The leading older dirt horse in the US. The speedy Knicks Go only has one way of running and that’s to go hard and fast from the front. He’s yet to be tested beyond 9f, and with the likes of Hot Rod Charlie and Kentucky Derby winner Medina Spirit breathing down his neck, his stamina will be severely tested. I’ve little doubt he’s the best horse in the field but want to take him on in these circumstances. (MM)

BLOWOUT: Not a make-or-break race for me by any stretch – quite the opposite in fact. But there’s clearly the possibility of an real burn-up with favourite Knicks Go right in among it, if not leading the way. He could taken on early by Medina Spirit and Hot Rod Charlie which spells trouble and his three-year-old stablemate Essential Quality – winner of the Juvenile at Keeneland last year – looks the most logical play at the odds. (MB)

BLOWOUT: Knicks Go leads the way on all the ratings, and some of his performances have been visually breath taking. But I have to go against the grain and say he’s not for me. As I mention in my big-race preview, it’s his first try at the trip and surely someone will be brave enough to try soften him up on the pace, as happened in the Saudi Cup? If so, there are some very smart tree-year-olds snapping at his heels should he fail to fire. (JP) 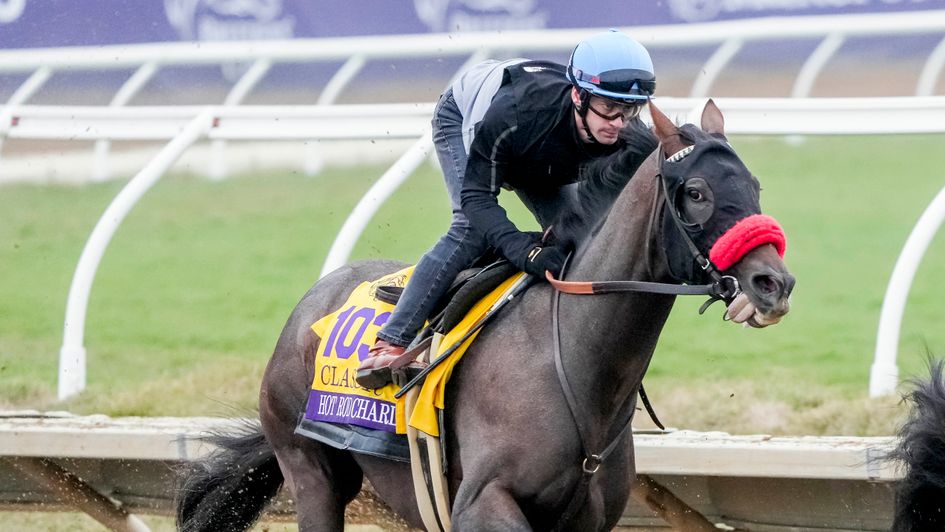