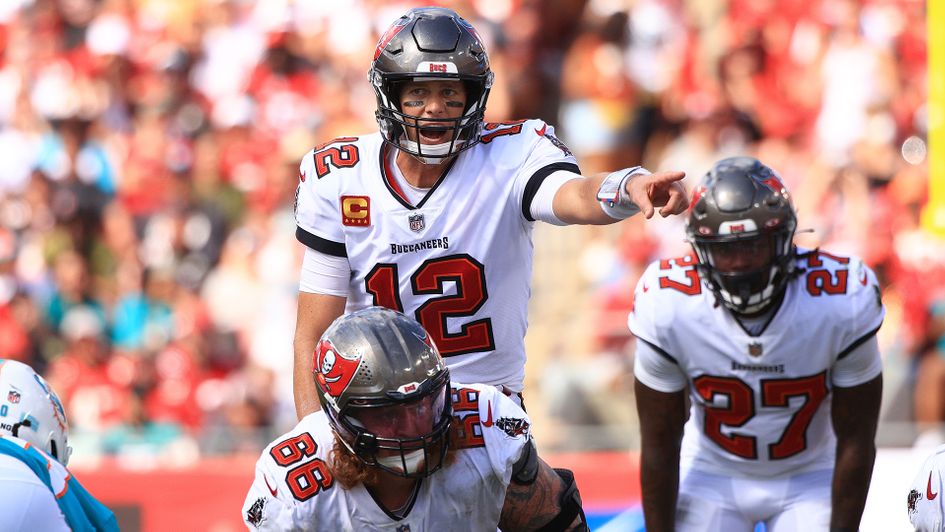 Tom Brady in action against the Miami Dolphins

NFL on TV: UK channel, dates and timings for 2022 season

The 2022 NFL season is now very much under way and you can watch all of it on TV in the UK.

We’ve come a long way since the early days of NFL coverage on this side of the pond, when you had to wait a full week for just one highlights show, and only the Super Bowl was televised live.

Now it’s an all-you-can-eat buffet of pro football entertainment, and the next few months have popcorn-worthy matchups at every turn.

Here is how the NFL TV landscape looks heading towards the 2022 season, including the primetime matchups which are already set.

And remember, all the kickoff dates here are when the games start in the UK, not in the United States. Alarm clocks at the ready for all those night games, which start in the wee small hours.

Most NFL games each weekend take place on a Sunday in two major slots - at 6pm in the UK and 9.25pm UK time.

Sky Sports gets to show a game in each slot during every weekend of the regular season. Each week they decide which games they will show, and we update you here as soon as we know.

More on this to come later, but Sky’s weekly choice of games has a big knock-on impact for NFL Game Pass subscribers in the UK.

The Week 12 NFL Sunday games chosen by Sky Sports for November 27 are:

Once THE must-watch game each week for TV viewers in America, Monday Night Football has been in the doldrums for many years now. Not any more though.

ESPN spent massive dollars in the offseason to entice Joe Buck and Troy Aikman to leave FOX and join MNF as its new announcing team.

Now we even have a few decent games to look forward to as well, and the good news is every single one of them will be aired on UK TV.

Channel 5 has the UK rights to MNF and the 2022 season is the final year of its current pact with the NFL. The games will also air on Sky Sports and on NFL Game Pass.

The Monday Night Football schedule for 2022 is already set in stone, and all games kick off at

8.15pm on the East Coast of the United States bar that double-header in Week 2.

The UK is five hours ahead of Eastern Time, so you will need to set your alarm clocks for 1.15am most Tuesdays to watch the games live in the UK.

Here is the schedule as it stands:

Sunday Night Football is now THE marquee primetime slot for NFL on TV in the United States - and you can watch all the 2022 games on Sky Sports and NFL Game Pass in the UK.

After a massive offseason of change in the broadcasting booths, SNF will have a very different look in 2022. With Al Michaels departing for Thursday Night Football (more on that to come), Cris Collinsworth gets a new play-by-play man in the shape of Mike Tirico.

Again it’s an early start for UK fans watching live, with games generally kicking off at 8.20pm Eastern, that’s 1.20am the following morning in the UK.

Another thing to remember about the SNF schedule is that not all the games are played on a Sunday. It gets the season opener on a Thursday each season plus a late game on Thanksgiving in November.

There are also a fair few things not set in stone yet for SNF - starting with its playoff matchups. Of course we have no idea who will figure in those. Week 18 is also still to be confirmed.

The schedule also allows NBC in the United States to “flex” its SNF schedule, which means it can change games on the fly. It can change two games between Weeks 5 and 10, and then any game between Week 11 and 18.

So a lot of the schedule you see here, is subject to potential change:

Wildcard Playoff Round: TBA vs TBA

Wildcard Playoff Round: TBA vs TBA

Divisional Playoff Round: TBA vs TBA

Jeff Bezos is a very very rich man, so shelling out $11billion over 11 years for the exclusive rights to Thursday Night Football in the U.S. was a drop in the ocean for the Amazon owner.

The mind-boggling deal means Prime Video will have the games exclusively in the United States, and will produce them with their new announcing team of Al Michaels and Kirk Herbstreit. And they will also show them in other countries too.

The UK will see two broadcasters have rights - Amazon Prime Video and Sky Sports - as well as NFL Game Pass. Sky continues to share the rights despite Amazon having exclusivity in the U.S.

For so long seen as the poor relation in terms of the primetime games, TNF is likely to be handed more enticing matchups now after that huge Amazon deal.

Thursday Night Football games kick off at 8.20pm Eastern Time in the United States. That is generally 1.20am on Fridays in the UK - alarm clocks needed yet again!

The 2022 schedule for Thursday Night Football looks like this:

NFL Game Pass is the NFL’s own official streaming product, and it offers a pretty nice service for subscribers.

You can watch just about every game during the season. Plus preseason action and a ton of documentary and other programming on the NFL Network channel.

There are some games you can’t watch though - remember we mentioned earlier that Sky’s choice of 6pm and 9.25pm kickoffs on regular-season Sundays impacts Game Pass subscribers?

Those games are subject to what the NFL calls ‘blackout’ rules, and that means they cannot be watched on Game Pass in the UK, as they are exclusive to Sky Sports.

The other games Sky has (Monday Night, Sunday Night etc plus all the playoff games) are available on Game Pass.