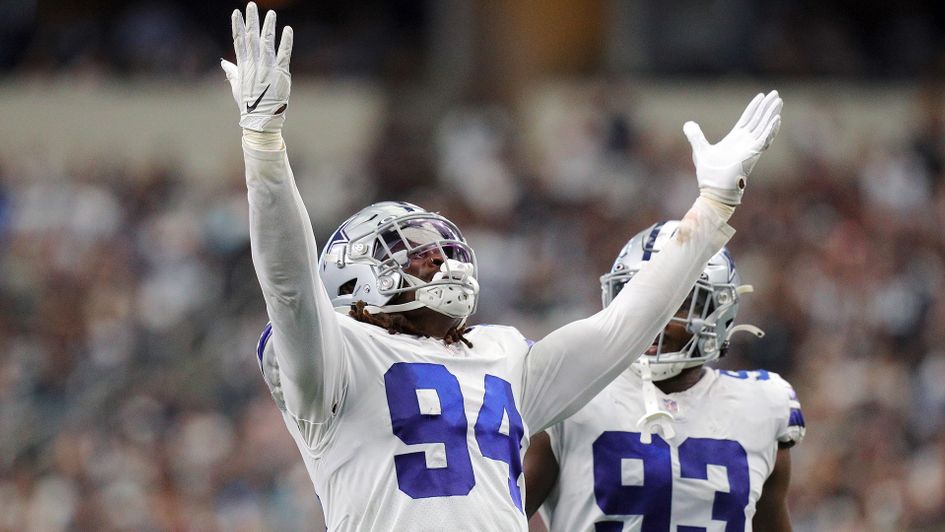 Randy Gregory of the Dallas Cowboys

The 2021 NFL regular season is now in the books and we are on to the post-season. Just 14 teams remain in with a chance of lifting the Vince Lombardi trophy at SoFi Stadium next month.

Whether it is picking against the spread or homing in on NFL prop bets, you now have plenty of evidence to sift through when making your pigskin picks.

The new expanded playoff format kicks off with the first ever Super Wild Card Weekend - featuring games across Saturday, Sunday and Monday.

The games, along with kickoff times, are as follows:

Our injury report is not intended to be exhaustive, but it highlights key narratives which will affect betting for the weekend’s biggest games:

The Raiders made it into the playoffs with that incredible OT defeat of the Chargers on Sunday Night Football, but the victory did come at a cost.

Vegas lost DT Darius Philon for the rest of the season with a torn patellar tendon in his knee, a significant blow given the fine year he had been enjoying.

The Bengals meanwhile are relatively healthy, though they are likely to be without DT Josh Tupou (MCL). S Ricardo Allen is in concussion protocol and also a doubt to face the Raiders.

Good news for the Pats ahead of their third meeting with Buffalo in recent weeks.

Talented rookie DT Christian Barmore DID NOT sustain a significant knee injury during Sunday’s loss in Miami, and he should be available for Wild Card play. DB Shaun Wade meanwhile has been added to the COVID list.

The Bucs need the cavalry to arrive as they head into the post-season in defence of the championship they won last February. And here it is.

RB Leonard Fournette and LBs Shaq Barrett and Jason Pierre-Paul are all expected to return vs Philly on Sunday, while another LB Lavonte David remains a doubt.

Tampa will of course go into playoff action with a depleted receiving corps, after the recent season-ending injury to Chris Godwin and the controversial release of Antonio Brown.

The Eagles played virtually no starters in that 51-26 rout at the hands of Dallas last Saturday, but they should be back to something approaching full strength this weekend.

Philly has activated a number of players from the COVID list after they missed that game with the Cowboys - including DT Fletcher Cox and TE Dallas Goedert. RBs Miles Sanders, Jordan Howard and Boston Scott are also expected to be available.

49ers LT Trent Williams remains a question mark heading into the big showdown in Arlington, though the smart money would be on him suiting up.

Williams missed the regular-season finale vs the Rams and is battling an elbow injury. San Fran needs him to repel that fearsome Cowboy pass rush led by Micah Parsons, Randy Gregory and Demarcus Lawrence.

San Francisco safeties Jaquiski Tartt (groin) and Talanoa Hufanga (knee) are the subect of mixed reports. The former should be good to go, but the latter aggravated his injury vs the Rams and is a question mark.

Finally for the 49ers, the special teams took a hit on Sunday when punter Mitch Wishnowsky sustained a concussion. He must be a major doubt for Sunday - another reason punters should never try to tackle…

Dallas had LT Tyron Smith, the aforementioned Parsons and CB Anthony Brown missing for the Philly game due to COVID, but all are expected to be back to face the Niners. Smith of course is hugely important and has been battling an ankle injury for most of the year.

More good news for a comparatively healthy Dallas roster comes with the fact that RB Tony Pollard should be fit to play after missing the Eagles game due to a foot injury.

Chiefs WR Tyreek Hill has been a shadow of his former self in recent weeks due to a heel injury, and he was pretty much anonymous in Saturday’s victory in Denver. HC Andy Reid though says the explosive pass catcher should be good to go vs Pittsburgh.

RB Darrel Williams is also expected to face the Steelers despite having a limited workload in Denver thanks to a painful toe injury. The status of another KC back in Clyde Edwards-Helaire (shoulder) remains a major doubt though.

The Steelers had scares surrounding RB Najee Harris (elbow) and WR Diontae Johnson (ribs) during the win over Baltimore on Sunday. Both though were able to return to the game and should be good to go vs KC this weekend.

Rams S Jordan Fuller is done for the season after sustaining a foot injury in Sunday’s loss to the 49ers at SoFi. He may require surgery after starting 16 games in 2021.

QB Matthew Stafford also came away from that Niners loss with an injury after hurting his toe - but he should be good to go vs Arizona on Monday Night Football.

The Cards were ravaged by injuries as their season fell apart just a little in the closing weeks. Arizona now has a doubt over RB James Conner after he suffered a rib injury in the loss to Seattle on Sunday.

Head coach Kliff Kingsbury is hopeful that CB Marco Wilson (shoulder) will be good to go in SoFi on Monday while Kevin Peterson is another DB concern after suffering a concussion. Recent signing Bashaud Breland meanwhile is likely to figure vs the Rams.

We told you earlier this season that the Packers could get a number of stars back for the post-season, and it appears Za’Darius Smith is almost there.

The pass-rushing LB has not played since September because of a back injury, but he is expected to practice this week and should be good to go for Green Bay’s Divisional playoff game in just under a fortnight.

‘Black Monday’, as it is now known, generates as many column inches and sound bites as any play or game during the NFL season. The 2022 version was no different as under-performing teams looked to move on from their coaching staffs.

Denver Broncos: The Broncos went early in announcing the departure of Vic Fangio on Sunday, in the aftermath of the Week 18 loss to Kansas City. Fangio had a talented roster at his disposal, but no franchise QB to steer the ship. A tale as old as time…

Chicago Bears: Matt Nagy was NFL Coach Of The Year in 2018, but the halo slipped comprehensively in 2021 as his Bears slumped to 6-11. Nagy’s failure to mould a QB of the future eventually proved the biggest part of his undoing - clearly Bears brass were unimpressed by the way he handed rookie Justin Fields this year. He’s gone.

Minnesota Vikings: Mike Zimmer departed the Vikings after eight years at the helm and an overall record of 74-59-1. Not terrible by any stretch, but in recent years you always got the impression Zimmer was not getting the most out of a talented roster. A great defensive mind he may be, but the conversative offense his team so often ran certainly frustrated the locals.

Miami Dolphins: This might be the biggest surprise of all, and you have to feel a little bit sorry for Brian Flores. The former Patriots DC was fired after his team beat New England to finish 2021 with a 9-8 record. At mid-season this wouldn’t have been a shocker with the Dolphins sitting at 1-7 and on a seven-game losing streak. They then turned it round though with seven straight wins to just miss out on the post-season. Despite that Flores is out after two consecutive winning seasons. Harsh to say the least.

New York Giants: After pondering the move for 48 hours, Big Blue finally made the call to fire Joe Judge on Tuesday afternoon local time. The decision came after New York ended a 4-13 season with a sixth straight loss, at home to the Washington Football Team. The sight of the Giants calling consecutive QB sneaks from deep inside their own territory with about five minutes remaining in the first half on Sunday was a bad look. So bad it might have been the clinching factor in the decision which came down on Tuesday. Once Daniel Jones was injured, the abject futility of an offense run by either Mike Glennon or Jake Fromm was quite something - just awful. And so, the Judge era in NY is over after a 10-23 record.

For the second year running the Jacksonville Jaguars will have the first overall pick in the NFL Draft.

The Jags managed to hang onto #1 despite stunning Indianapolis in Week 18, ending the Colts’ playoff hopes and allowing the Steelers to sneak in through the back door.

Detroit will pick second despite shocking Green Bay in its regular-season finale, with the Houston Texas third. Both the New York Giants and the Jets have two top-10 picks.

The order for the top 18 picks are now locked in, with playoff results to determine the rest. Here is how things stand:

One of the NFL’s greatest rivalries is revived in the post-season on Sunday when the 49ers visit AT&T Stadium in Wild Card Weekend combat.

These two iconic franchises met four times in NFC Championship Games in the 1980s and 1990s, producing some of THE great moments in league history. Back then their matchups were in reality the Super Bowl - those teams were that good.

Joe Montana, Troy Aikman, Steve Young, Emmitt Smith, Michael Irvin, Jerry Rice and Deion Sanders are no longer around but the 2021 versions of the Cowboys and the Niners are pretty good.

The question mark against Dallas is whether it is a flat-track bully - a lot of its dominant wins have been against bad teams in the NFC East. The story hasn’t been so strong against better opposition.

San Fran meanwhile will be a dangerous foe for anybody in January after beating the Rams on Sunday to get into the tournament.

Kyle Shanahan’s offense might be one of the toughest puzzles to solve in the league, and assuming Jimmy Garoppolo can keep mistakes to a minimum, this should be a beauty.

Dallas opened a three-point favourite on Monday, and we would be surprised if the final outcome is not a nail-biter.