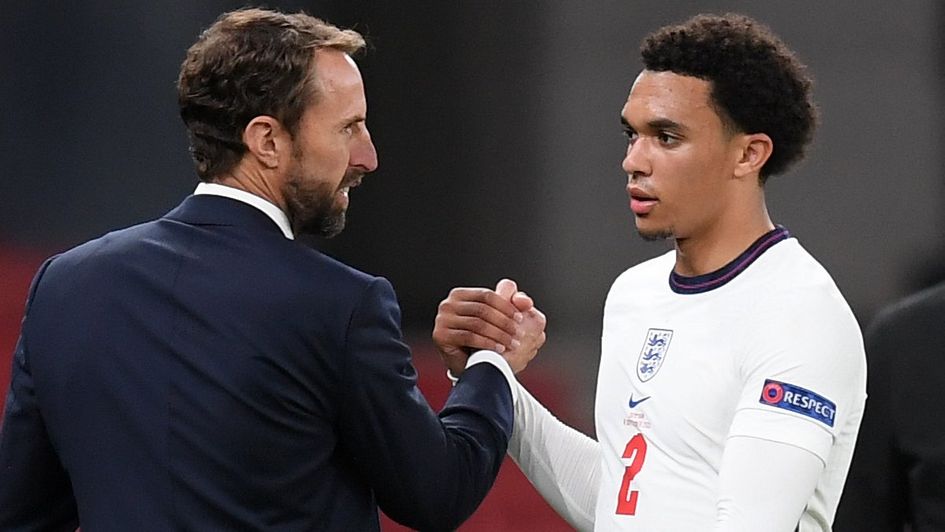 When Trent Alexander-Arnold faces Arsenal on Saturday, it will be 19 days since his last game. For him, the international break carries a different meaning: it is one of the longer breaks from football he has had in the last four years.

The man many regard as the world’s best right-back has been deemed England’s fourth-choice, omitted from the squad in favour of Kieran Trippier and Reece James, who both played against San Marino, and Kyle Walker, who got the nod in Albania.

He has been demoted for two different types of right-back: Walker as the defensive choice, Trippier and James as the more attacking options. Perhaps he has suffered from a determination to use different systems. Gareth Southgate has played 4-3-3 against San Marino and 4-2-3-1 in Albania.

After reverting to a back four against lesser opponents, he has probably kept the option of three centre-backs against superior sides. But when he wanted a conventional full-back in Tirana, he chose Walker, the specialist defender of the three.

A back three may be resurrected, either against Poland or in Euro 2020. Thomas Tuchel is now playing with wing-backs for Chelsea; Diego Simeone made a surprise switch to do so with Atletico Madrid. It means James and Trippier have more practice in one of the shapes Southgate has used, whereas Liverpool last began with a back three in December 2017, and even that was a one-off.

Alexander-Arnold seems to have the skills of a wing-back, but lacks the experience. He is accustomed to different tactics. And yet he was the revolutionary, the defender who got 25 Premier League assists over the course of two seasons. He is not the only numerical outlier being ignored.

If Southgate went purely on grounds of defensive metrics, then Aaron Wan-Bissaka would be a shoo-in: the Manchester United man ranks second in the Premier League for tackles this season after coming first and third in the last two campaigns. Instead, Walker has been chosen ahead of him.

This season, Alexander-Arnold is down to three assists, level with Wilfred Ndidi and Pierre-Emile Hojbjerg. It is not entirely his fault: like Liverpool as a whole, he is suffering from poor finishing.

His expected assists total is 6.27, leading Jurgen Klopp’s squad and the 10th best in the division. Since Christmas, he has an xA of 4.03 but just one actual assist. 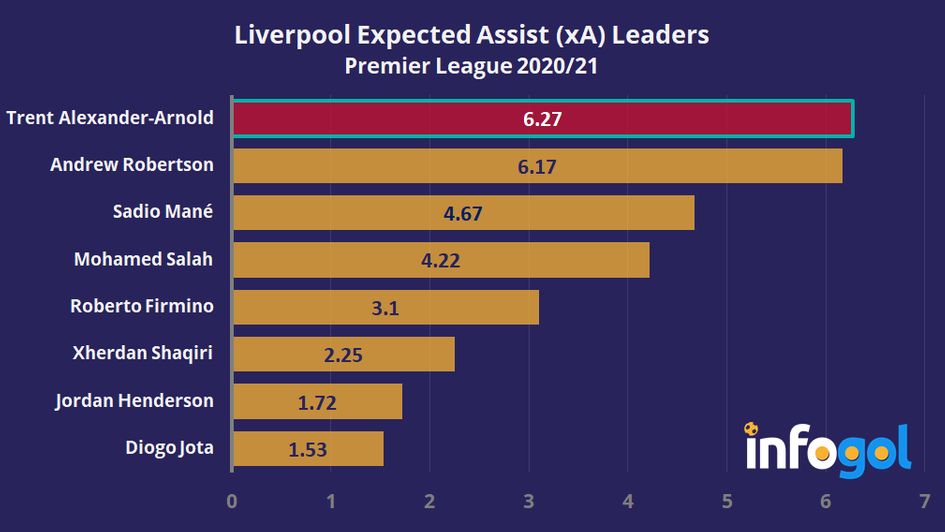 It is undeniable that Alexander-Arnold remains a unique player in some respects. Only Bruno Fernandes has completed more passes into the penalty area than the Liverpool man; the only other full-backs in the top 18 are Robertson and Joao Cancelo, who famously spends much of his time in midfield. He tops the table for progressive passes that move the ball forward at least 10 metres.

England full-backs for the Euros (odds via Sky Bet)

The sense is that Southgate does not want the right-back as playmaker and is emphasising different skills: he prefers him as crosser and defender. Walker has a lower volume of tackles and interceptions than Alexander-Arnold, but that may reflect that Manchester City have more of the ball and less defending to do.

But in each of the last four seasons, he has won at least 55 percent of his tackles, and while Alexander-Arnold’s success rate is at 59.6 percent in the current campaign, it is the only time it has topped 40 percent. Few of the statistics measure Walker’s recovery pace, which gives him an asset his rivals lack.

But among the attacking alternatives, James has completed more crosses into the penalty area (21) than Alexander-Arnold, despite spending 498 minutes less on the pitch in the top flight. He has also made far more interceptions, with 32.

Only five players, including Lionel Messi, have more assists than Trippier in La Liga while, aided by his set-pieces, the former Burnley man created the most chances in the 2018 World Cup. And yet his selection can come down to preference and experience.

In different teams and different leagues, Alexander-Arnold and Trippier have produced almost identical defensive statistics: 47 tackles attempted apiece, with the Merseysider winning 30 to Trippier's 29, 20 interceptions to 21, 50 clearances to 46, one error leading to a shot apiece. 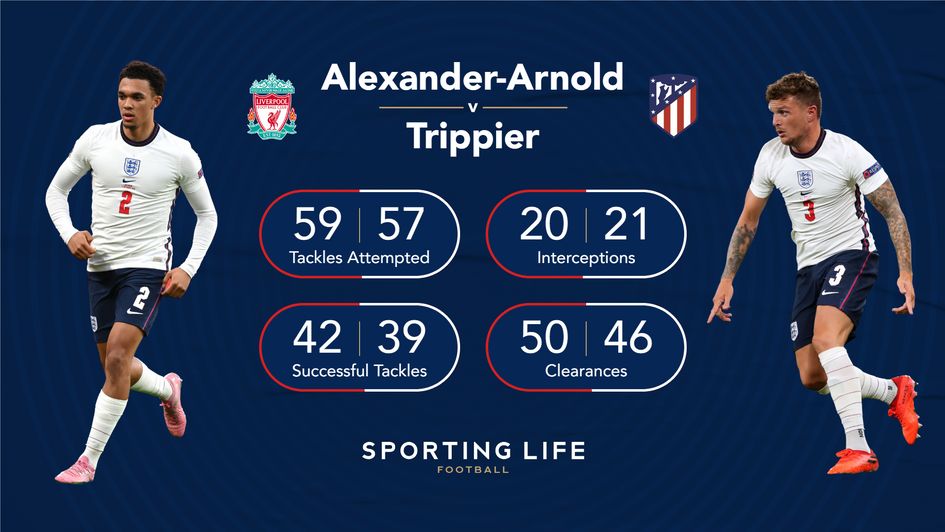 One notable difference, however, is that Alexander-Arnold has made 27 Premier League appearances to Trippier’s 18 in La Liga, meaning the older player is averaging around 50 percent more tackles and clearances per match.

There is a further full-back to provide context. Southgate’s switch to a back four came as he recalled Luke Shaw to the squad. The Manchester United left-back has carried the ball into the final third more often than any other defender this season; indeed, Walker and James and Shaw’s immediate rival Ben Chilwell have done so more often per 90 minutes than Alexander-Arnold.

James and Walker have both managed more successful dribbles than Alexander-Arnold. Maybe the England manager is looking for his full-backs to be runners more than passers.

Alexander-Arnold has been a new type of right-back when perhaps all Southgate wanted was more conventional ones.