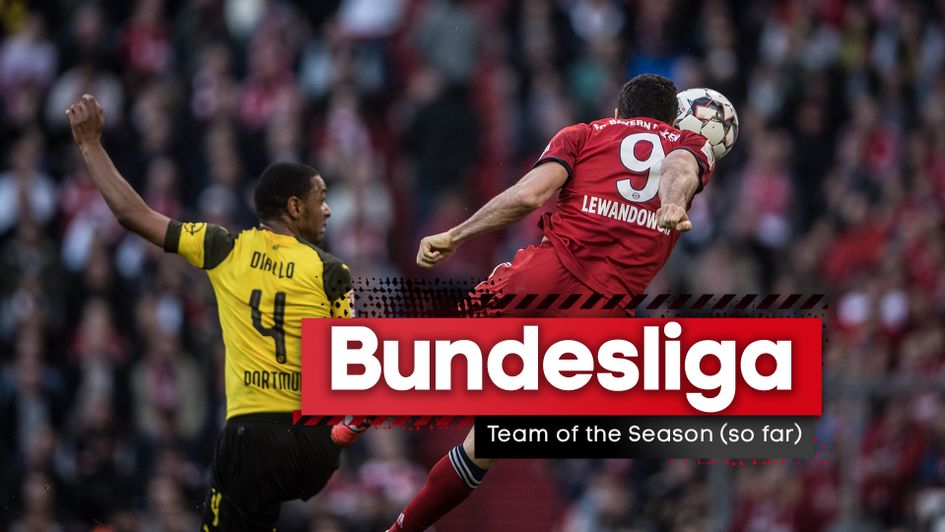 We pick out our Bundesliga Team of the Season

Bundesliga: The Team of the 2019/20 Season so far with league set to resume

The Bundesliga is set to become the first major European league to return with nine gameweeks remaining of the current campaign.

The COVID-19 pandemic forced the German leagues to be postponed in mid-March but the DFL have confirmed that the Bundesliga will return on Saturday May 16.

At the top of the table, five teams have a chance of securing the title with Bayern Munich's current dominance under threat.

Borussia Dortmund and RB Leipzig are the main contenders to de-throne the Bavarian side, while Borussia Monchengladbach and Bayer Leverkusen remain the outsiders.

Schake's poor form has opened up the potential of a top-six finish for those other teams in the top-half, with Wolfsburg and Freiburg just a single point behind.

Here, with football set to be resume in Germany, Tom Carnduff picks out his Bundesliga Team of the Season so far.

The goalkeeping class across the Bundesliga this season hasn't been as high as we are perhaps used to, but Borussia Monchengladbach stopper Yann Sommer gets the nod here.

Is it due to his incredible one finger save against Bayern Munich back in December? Partly. But his performances have continually gone under the European radar since his switch from Basel in 2014.

He's the type of goalkeeper that you love to watch in that his reflexes are a big positive. Sommer has the ability to save from close range and react in a split second, leading to him producing some magnificent stops.

There have been some dips in form, as with any goalkeeper, and errors against RB Leipzig and Koln in recent games have stood out. However, Sommer's performances across the board grant him a spot in this Team of the Season. 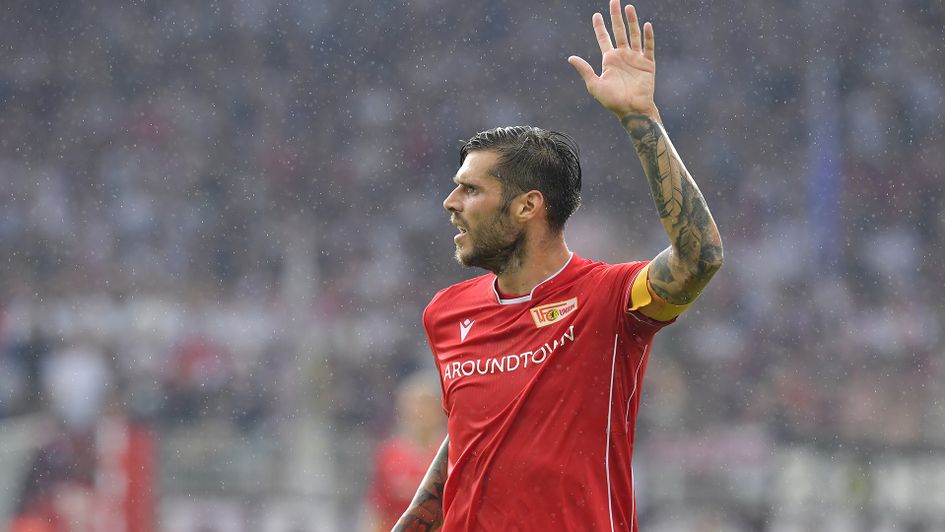 It's always good to throw in a few wildcards when it comes to selecting a Team of the Season and the performances of Christopher Trimmel have gone somewhat under-the-radar to those outside of Germany.

The 33-year-old has captained Union Berlin during their debut Bundesliga campaign and, switching between right-back and right midfield, he has possessed a real attacking threat with nine assists on his tally.

That ability going forward is demonstrated by his range of passing and threat from set-piece situations. On the flip side, he has a presence in the air and contributes in defence.

His first season in the German Bundesliga has been a success and Union Berlin have a comfortable margin between themselves and the drop zone. We await to see if he can replicate it during the 2020/21 campaign. 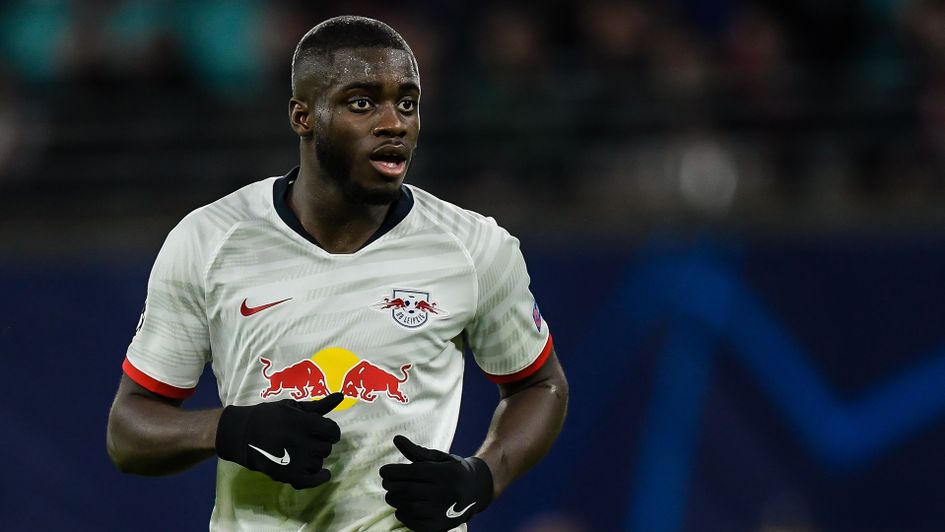 Dayot Upamecano in action against Tottenham

Upamecano has been a star in an RB Leipzig team who are battling for the title and his form has led to a number of clubs across Europe, including those in the Premier League, being linked with a move when the transfer window opens again.

He times tackles to perfection and comes across as the type of defender that forwards hate coming up against. Then there is the confidence he possesses to carry the ball out from the back.

A wonderful player to watch, Upamecano is a certainty for a spot in any Team of the Season. 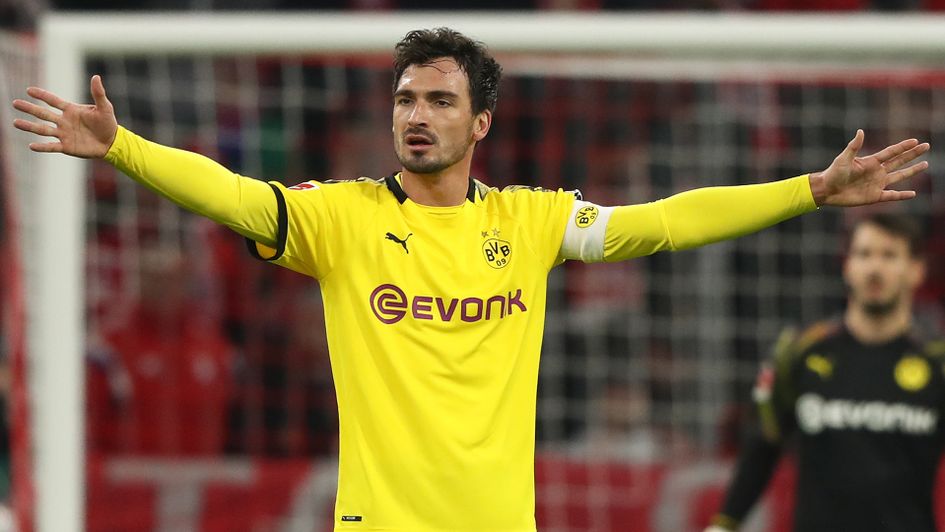 The form of those players further up the field, the likes of Erling Haaland, Jadon Sancho and Julian Brandt, has hit the headlines but Mats Hummels' second spell at Borussia Dortmund has been a success.

Returning to the club from Bayern Munich, Hummels has helped to improve the Dortmund back line, forming a strong trio with Dan-Axel Zagadou and Lukasz Piszczek in the process.

Dortmund will concede goals, such is the nature of the way that they play, but Hummels' presence has provided some much-needed stability.

It remains to be seen if he retains his spot in the German national team side as they develop for the future. However, Hummels deserves a place in the Team of the Season So Far.

Borussia Monchengladbach's Ramy Bensebaini would have been a very strong contender for this position but his disrupted season has seen him feature in just eleven Bundesliga fixtures. I was tempted to put him in because of his performances in those appearances but Alphonso Davies has shone in this role.

Across the course of the campaign, Davies has excelled playing more defensively than usual and he's a star of a Bayern team in their usual spot at the summit of the standings.

His transformation from a player on the outskirts of the squad to the starting left-back has been extraordinary. He's not only the best left-back in the Bundesliga but has a strong case across Europe.

Davies' commitment to Bayern is clear in the new contract he signed to keep him at the Allianz Arena until 2025. The speedy youngster is set to dominate the left side of the pitch for years to come. 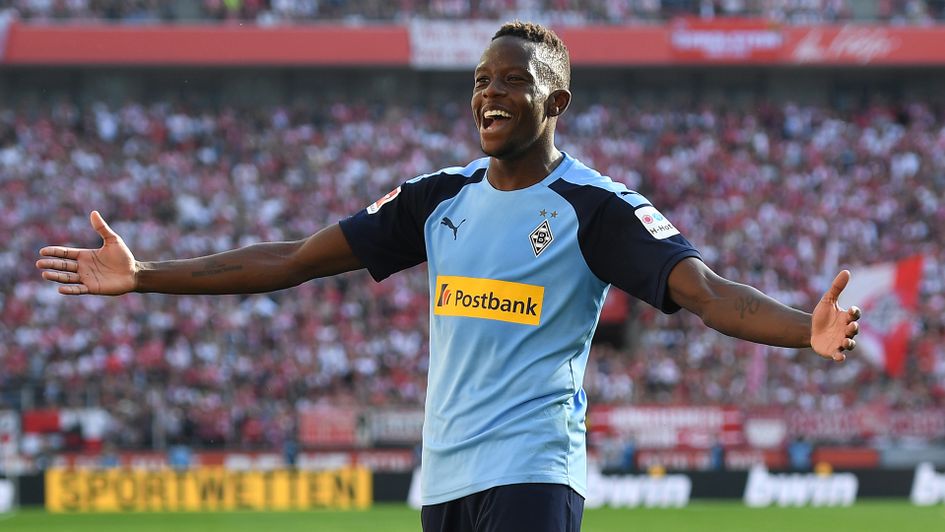 There were a number of strong contenders to secure the defensive midfield role but Denis Zakaria has stood out in the middle of the park for Borussia Monchengladbach.

The 23-year-old can be viewed as a utility man for his current side through any of the central positions. He has balanced the midfield responsibilities between central and defensive, while also going into the back line when required.

Zakaria is comfortable with the ball at his feet and likes to dribble, regularly posting three or more successful dribbles in a game. The defensive side of his game is also there; he's only failed to register a tackle on one occasion this season.

One of a handful of talented Swiss players at Monchengladbach, Zakaria has a big future ahead of him. 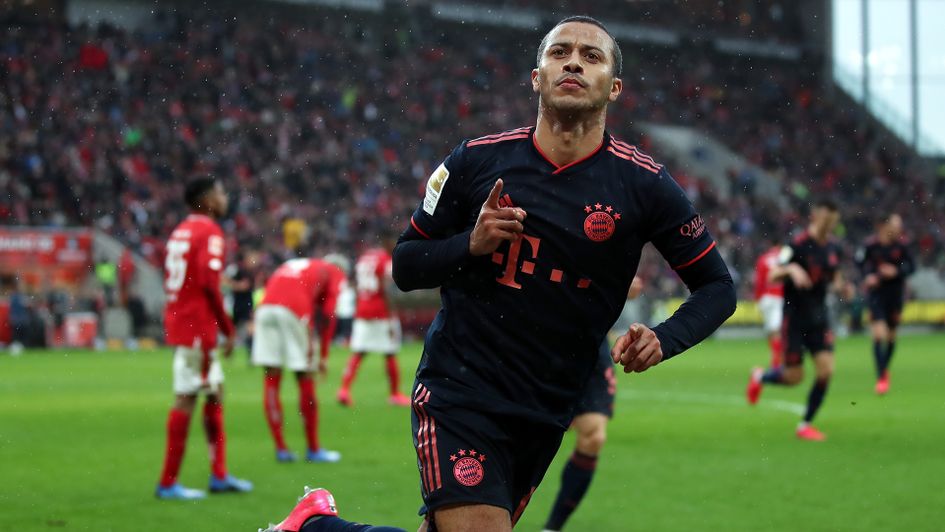 Thiago could easily play either defensive midfield or further up the pitch, but we are slotting him into a central position here given his showings for Bayern.

His all-round game is perfect for a player in his position. Comfortable on the ball, Thiago can pick out passes for others and create attacks from all areas of the pitch.

There's the whole debate surrounding 'tactical fouls' but he's a player that isn't afraid to tackle and breakdown play with the opposition looking to attack. The attacking and defensive sides of his game are equally balanced.

Thiago is one of the best central players in Europe, not just Germany, and he is a vital part of the success Bayern have experienced in recent seasons. 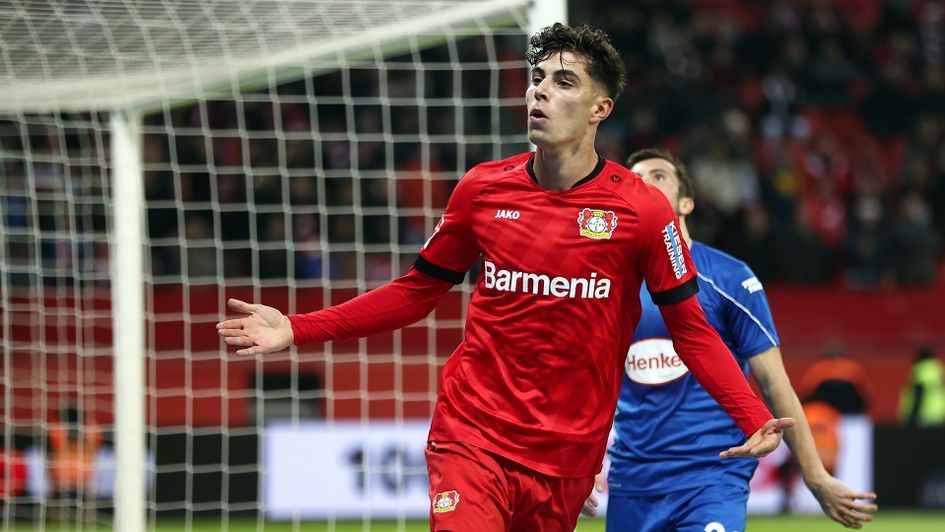 Kai Havertz, alongside his team Bayer Leverkusen, had a fairly inconsistent opening couple of months of the season, but he remains one of the stars of German football and has been excellent since the winter break.

The 20-year-old is part of a wave of young talent rising through the ranks of the national team but Havertz is the stand-out figure. He is a real presence in the midfield areas, drifting past defenders with relative ease and posing that attacking threat.

Havertz has scored ten goals, alongside a further eight assists, in 34 games across all competitions this season with Leverkusen big outsiders in the title race - eight of those have come since the season restarted in January.

He's a player who will command a huge price tag in the future, and given the expected low spending in the next transfer window, Leverkusen will have Havertz at the heart of their attack for another campaign at least.

Jadon Sancho's impact as Borussia Dortmund has been more than significant. He's established himself as one of the best players in Germany, and crucially elected to represent England at international level.

The 20-year-old has 17 goals and 19 assists on his tally across all competitions this season. Comfortable across a range of forward positions, we've elected to put him on his preferred right side.

Little more needs to be said on just how good Sancho is. His dribbling is eye-catching while he can read the game better than most other forwards. That helps him to pick out those key passes and contribute in goal-scoring situations.

Sancho is another player who continues to attract interest from elsewhere but he should remain part of this impressive Dortmund front line for another season at least.

At £8million, he remains one of football's best ever bargain buys. 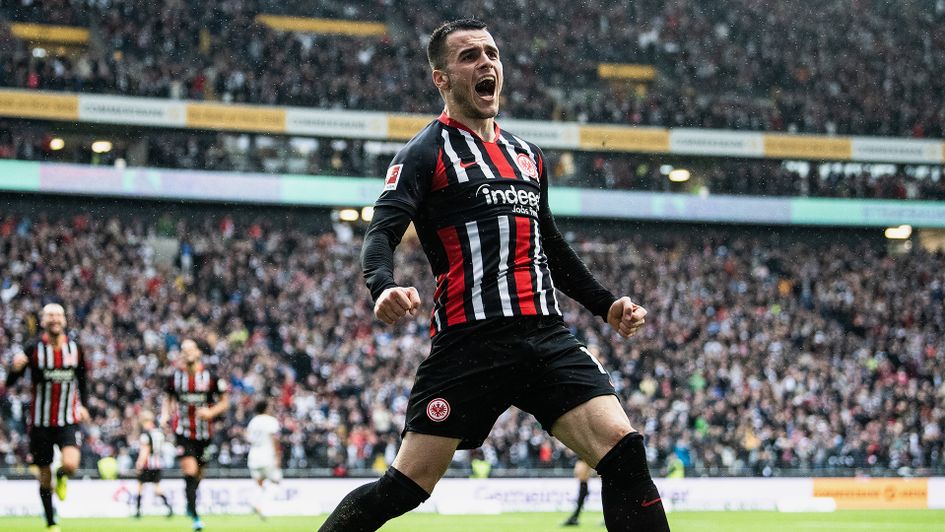 We're cheating slightly here by focusing on Filip Kostic's form across all competitions, although his showings in the Bundesliga have been strong.

The 27-year-old has 12 goals and 15 assists both domestically and in Europe this season and is a key part of this Eintracht Frankfurt side.

Kostic is a typical winger in that he likes to have the ball at his feet and pick out those with crosses into the box. There is a focus on those longer passes as opposed to short, quick-moving play.

The opening months of the season were fairly quiet but performances picked up through December and January. That form has led to him securing the left wing slot in our Team of the Season.

There was a big temptation to include Erling Haaland here, given his form since the January switch to Dortmund, but Robert Lewandowski has the striker spot nailed down.

He's one of world football's most prolific forwards. The Poland international has 39 goals in 33 appearances across all competitions this season.

In fact, his overall form while at the Bavarian club is 230 goals in 275 games - that is frankly ridiculous.

Lewandowski is a star of the league and can score in any situation. Whether it be with the ball at his feet or in the air, the Bayern forward can find a way to beat any defence in Europe.

Honourable mention for Timo Werner as well. He's been incredible up front for RB Leipzig but when it comes to a choice between him and Lewandowski, there is only one winner.