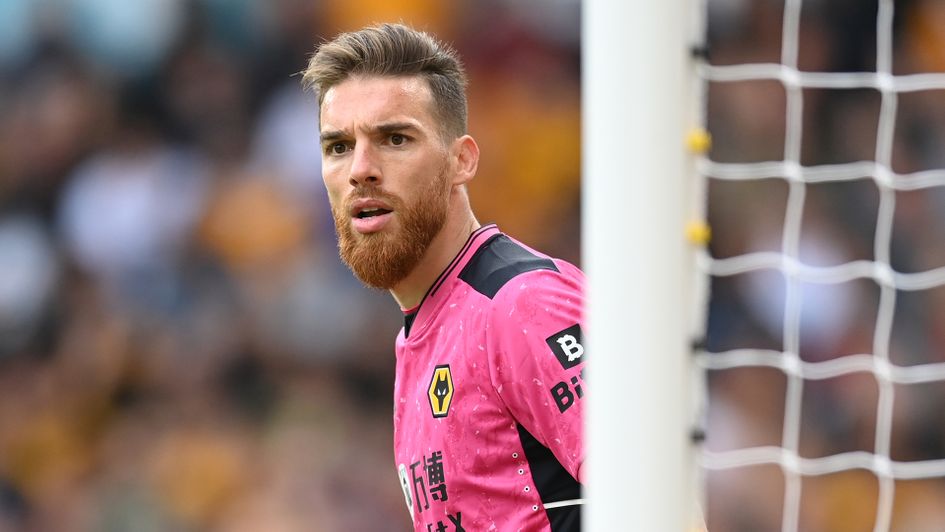 Our fantasy football picks, transfers, advice and more for Gameweek 7

I can't help but be pleased with the performance of some of the Gameweek 6 suggestions.

Ismaïla Sarr continued his good start to the season with a goal as Watford picked up a point against Newcastle, while Conor Gallagher grabbed the assist as Crystal Palace picked up a point in a 1-1 draw with Brighton.

European action in midweek means that plenty of players from the top clubs will have played multiple games, but the focus is now on Gameweek 7 and where the points can be picked up there.

More and more players are using chips, with Fantasy Football Fix telling me that 35.3% of players have now played their Wildcard. Alongside that, 13.6% have gone for their Triple Captain - some of those went for Bruno Fernandes on Saturday, which returned a total of 0 points.

Who has the best fixtures in Gameweek 7?

They were beaten by Manchester City in their last league encounter, but CHELSEA have a great chance to bounce back as they welcome Southampton to Stamford Bridge.

The Saints left empty-handed against Wolves last time out to leave them 16th in the Premier League standings. They're lucky not to have conceded more than the seven on their tally - Infogol's xGA currently stands at 9.0.

Anyone facing Norwich at home will always be backed for victory, although many won't have a BURNLEY asset in their side. Perhaps Chris Wood could be a solid option against a struggling defence.

Elsewhere, LEEDS may not yet have a victory on their tally, but Watford visiting Elland Road presents them with the first opportunity to do so.

With Patrick Bamford still questionable, Rodrigo may be a decent differential option if he takes up the striker role. Daniel James may also be a solid choice if Raphinha is absent.

Gallagher has already been mentioned, but you could make the case for a number of players in Patrick Vieira's side.

What are the best transfers to make for Gameweek 7?

Based on statistics, form and fixtures, we pick out three players worth considering for Gameweek 7. 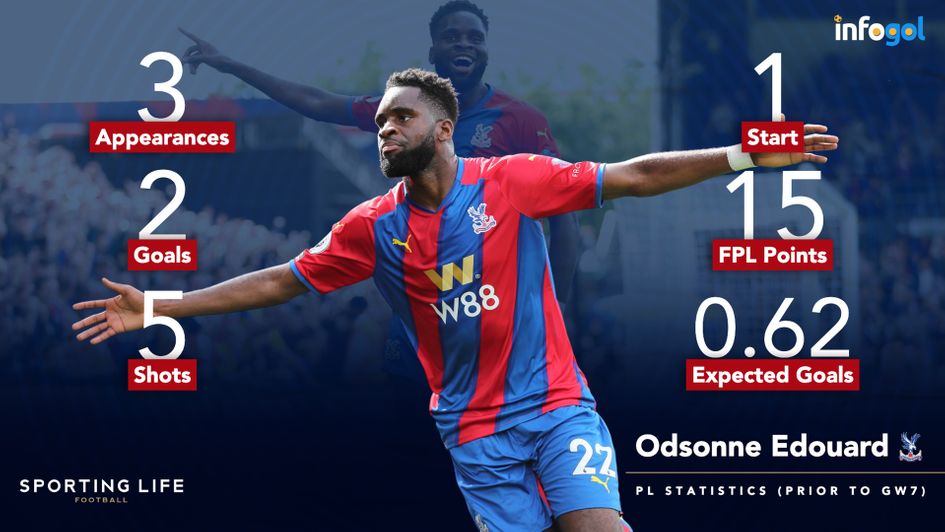 We'll start with Palace, who take on Leicester before facing Arsenal in Gameweek 8 and then Newcastle after that - a decent run of fixtures on current form.

The one player who is now interesting is Odsonne Edouard. He got a start against Brighton and should now establish himself as Palace's starting striker. At a bargain price, he could become one who is too good to ignore.

There is a case of potentially getting ahead of the curve here, and his price tag frees up budget to use on big hitters elsewhere. Even with Gallagher in midfield, we should feel confident enough to double up on Palace assets.

They're a different side this time around and can consider themselves unlucky not to beat their rivals on Monday night. They may sit 15th in the table, but Infogol has them 10th based on performance.

Edouard netted twice from the bench against Tottenham, and his average xG per match is currently 0.52. With a run of starts, he can score more. It's also worth noting that Fantasy Football Fix does make it a possibility that his price could rise before the weekend, so it's a transfer to make early. 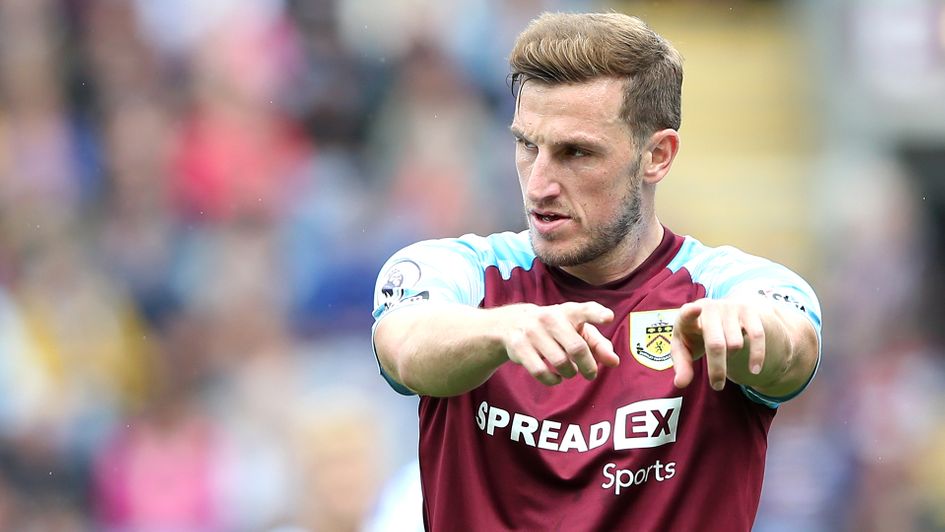 Norwich at home is the one to target for any striker - Chris Wood may only have one on his tally so far but this game provides a great opportunity to deliver more points.

Infogol has Wood sitting on 2.14 xG from 12 total shots, so he could have had more by this stage. It wouldn't be a surprise to see that figure pushing 3.0 with a couple of big chances against the league's worst defence.

The advantage of taking Wood now is that you get that Norwich game, but Burnley also have a decent run of fixtures. It may be Manchester City in Gameweek 8 (bench option) but they then face Southampton, Brentford, Crystal Palace, Wolves and Newcastle before mid-December.

At a £6.8m, he remains a great budget option for FPL players. 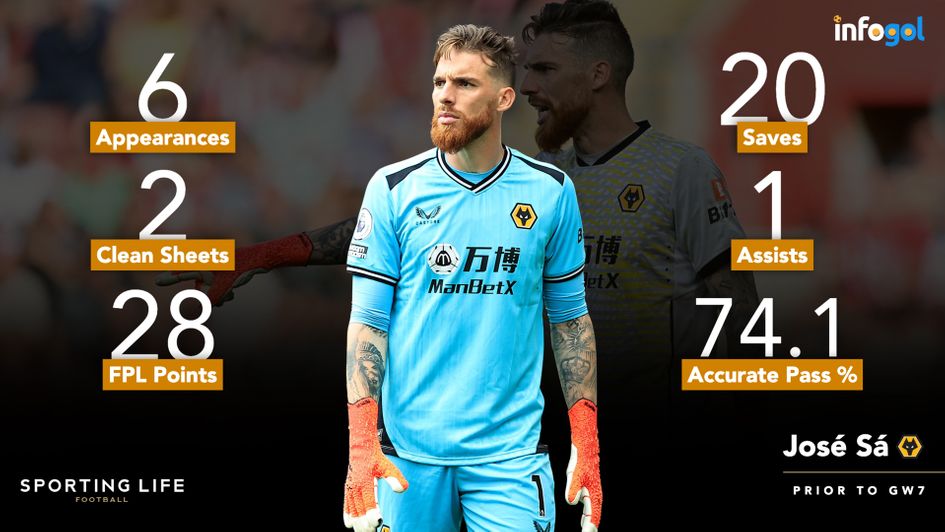 A great option in goal, José Sá picked up an assist and a clean sheet as Wolves beat Southampton in Gameweek 6, and there's a chance of another shutout as they welcome Newcastle on Saturday.

There's some long-term advantage with Aston Villa, Leeds and Everton to come after the international break, while the fixture list also gives them Crystal Palace, Norwich and Burnley in November.

Sá sits fourth in total saves made, while also having two clean sheets so far. He's also decisive when needed - only Brentford's David Raya has had more runs out than the Wolves man.

It's a great price for a goalkeeper when we consider the tags attached to others - Sá is a strong option at this stage.

Who is the best captain for Gameweek 7?

While many will look at Burnley v Norwich and think there is potential for home goals, there will be a reluctance to captain someone like Wood given his season so far.

Then there is the matter of Liverpool v City. Salah is the go-to for many, but their toughest opponent means there is a real possibility of a four-point captain.

Brentford conceded three last time out, while MICHAIL ANTONIO found the scoresheet against Leeds. The West Ham striker is enjoying a fine start to the campaign and can continue with another goal here.

Manchester United welcome Everton, so of course we have to flag up CRISTIANO RONALDO as they return to Old Trafford. Following Bruno Fernandes' failed penalty last week, there is now every chance that Ronaldo is on the spot kicks.

An alternative suggestion is MASON GREENWOOD with many targeting Ronaldo. His FPL ownership level remains at 17.3%, so many will overlook him as a captaincy option.

Of course, with Chelsea welcoming Southampton, ROMELU LUKAKU looks a safe enough option with a goal expected at Stamford Bridge.