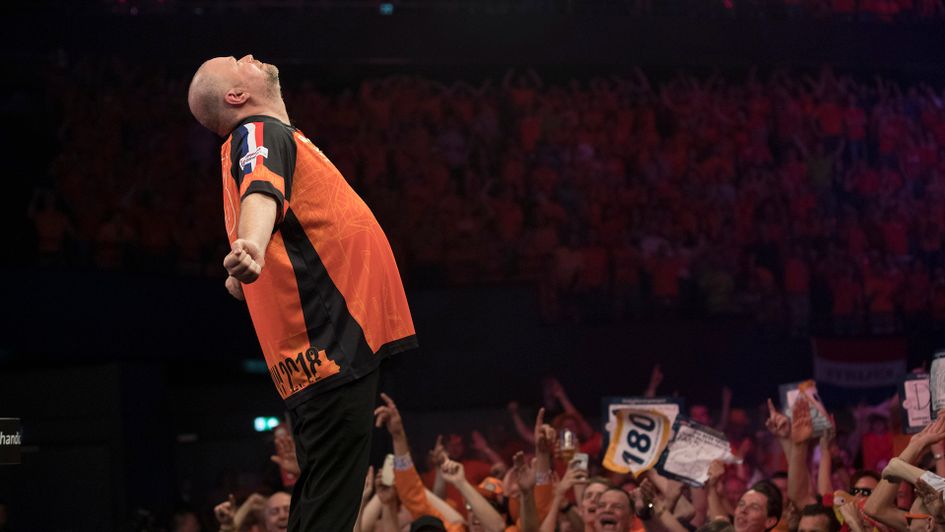 A review of the second of this week's Premier League Darts nights in Rotterdam, as Raymond van Barneveld sprang a surprise.

It was billed as the match of round and so it proved as Raymond van Barneveld held off a fightback from Michael van Gerwen to win 7-5 in Rotterdam.

The two finest players the Netherlands has ever produced played out a pulsating Premier League encounter in front of a crowd decked in orange, and it was the elder statesman who held firm to hit double four just as victory had appeared set to slip through his fingers.

From 6-3 down, van Gerwen fought back to 6-5 and was waiting in the wings as van Barneveld stepped back to the oche to hit treble 20 followed by double for at the first attempt to seal what was a deserved win.

"To beat Michael here in front of this fantastic crowd is amazing," said Van Barneveld, who turns 51 on Friday.

"I managed to lead the whole match and they were always behind me. They are amazing and will never let me down in Holland.

"I was lucky to have another night in Rotterdam, so to 20,000 people I say a massive thank you. It's a nice little birthday present for tomorrow."

The stage had been perfectly set when van Gerwen lost to Peter Wright on Wednesday, while van Barneveld bounced back to form following a lifeless run with victory over Simon Whitlock.

And it was van Barneveld who picked up where he left off, hitting 64 for a break of throw in the opening leg of the match after MVG had missed double 11 for a 124 finish - a single dart which, had it gone the other side of the wire, would surely have totally altered the result.

Instead, a rejuvenated and refocused van Barneveld was able to establish an early cushion and while constantly pegged back by his younger rival, a brilliant bullseye in leg nine saw the lead extended to three legs at 6-3.

Van Gerwen hit double 18 to stay in the match in the very next leg with van Barneveld waiting on 36, and again it was a first-time dart at double which found its target - this time tops - to take the match the distance.

As MVG threw everything he had at his opponent, van Barneveld composed himself for a 68 finish which must rank as one of his best in the circumstances, sealing a vital win which keeps his hopes of a semi-final spot alive.

For van Gerwen, it was another defeat which he'll feel should have been different. The two-time world champion averaged fully eight points more than his rival and produced a significantly higher checkout percentage, yet all the crucial moments went the way of the winner.

Michael Smith bounced back to winning ways with a 7-1 demolition of Simon Whitlock, solidifying his place inside the Premier League's top four.

Smith was thrashed by Gary Anderson on Wednesday, the first of a Dutch double-header in Rotterdam, but moved back in front of the Scot with a victory which boosts his play-off prospects.

Whitlock won the first leg when Smith missed two darts for it, but from there the former world youth champion was imperious as he ran off seven in succession.

After levelling the score, Smith moved ahead courtesy of a stunning 160 finish and was soon 5-1 up despite missing for a 10-dart leg in the sixth, eventually taking it in 12.

A smart 65 finish saw the 27-year-old ensure at least a point before he capped a memorable performance by hitting bullseye with one dart in hand for an 86 checkout and the match.

🎯🐂 Michael Smith takes a big step closer to the play-offs with a crushing 7-1 win over Simon Whitlock 👏pic.twitter.com/nlcPqXDipC

Defeat for Whitlock means the Australian ends the night bottom of the table and for the second night running, he could only force four darts at double, an average of little more than 90 combined with a high finish of 28 underlining how far he was from his best.

Smith on the other hand could afford to miss eight leg darts in a comfortable win - one which keeps him in fourth and clear of the chasing pack.

And that was that!

Smith remains fourth due to Gary Anderson's imperious display against Daryl Gurney, the two-time world champion wrapping up a 7-3 success in double-quick time.

Anderson had narrowly missed out on a nine-dart finish during Wednesday's victory over Rob Cross, and had another chance for one at the very start of this game as he opened 177, 180 only to make a hash of his third visit.

Still, it was a sign of the level Gurney would need to find in order to remain competitive and, after Anderson had thrown a 170 finish to move back in front at 2-1, the Northern Irishman was always playing second fiddle.

Anderson took out 77 to steal the fourth leg, 88 for a 4-2 lead and then threw 13- and 11-dart legs to move within one of victory, the latter completed by another ruthless finish, this time 92.

Gurney fought hard to reduce the deficit with a brave hold, but as Anderson nudged his average up towards 110, his opponent could do little as a 7-3 victory was confirmed on double two.

"I've come away with six points and played quite well so I'm over the moon," said Anderson. "I said before we came out here that six points was my aim, and to get that is brilliant.

"We've come across to Holland for two nights and played in front of 20,000 people, and it’s absolutely amazing.

"I thought this game couldn’t get any bigger about five years ago but it obviously can, it’s amazing how darts has grown."

🚂🎣 Just the second 170 checkout for Gary Anderson this season 🙌#lovethedartspic.twitter.com/X80Q98ePSt

Wright fights back to force draw

Peter Wright produced a dogged display to earn a 6-6 draw with Rob Cross, one night on from his thrilling victory over van Gerwen.

Cross took control of the match early on, throwing a trio of 140 finishes before taking out 81 in a 12-dart opener, then breaking throw after Wright had missed four darts at double in the second leg.

A 13-dart leg soon followed by an 88 checkout had Cross in control at 4-1 and he led by three again at 5-2, at which point five of six attempts at double had found their target.

Wright wasn't going away, however, and a 61 finish got him back within two before he capitalised on a missed dart at bullseye from the world champion to reduce the deficit to 5-4.

Cross started the 10th leg with two poor throws which allowed Wright to level at 5-5 as he took out 65, and despite no fewer than six missed darts at double in the 11th he ended it back in front after finally hitting double four.

Wright, though, found one more big push to bang in his second maximum and ultimately hold throw comfortably in the final leg, ensuring that he would leave the Netherlands having secured three points from a possible four despite facing the two toughest opponents in the sport.

For Cross, it was an opportunity missed although defeat for van Gerwen later on would mean he edged closer to the top of the table.

Daryl Gurney bounced back from a thumping at the hands of Gary Anderson to dish out one of his own, beating Simon Whitlock 7-1.

The result completed a miserable trip to Rotterdam for Whitlock, who lost all three games over the course of two nights as his hopes of a play-off spot evaporated.

Gurney produced a solid display, averaging just shy of 100, hitting three maximums and half of his 14 darts at double, but he wasn't pushed at all by the out-of-sorts Aussie.

Gurney won the first leg on double eight under limited pressure, made it 2-0 with an 11-dart finish, and doubled that lead before Whitlock got on the board via double one.

Whitlock could have won the next leg but twice missed double 19, allowing his opponent to step in, and 30 darts later it was job done for Gurney, whose hopes of reaching the O2 were kept alive.

"I'm going to fight right until the end, until someone says I can't qualify, and the belief is still there for me," said Gurney. "I've absolutely loved the Premier League.

"It's honestly the best thing I've ever played in, you play against the best players in the world and if you don't produce your best darts you're going to get beaten."

Suljovic and Price were eliminated after Judgement Night