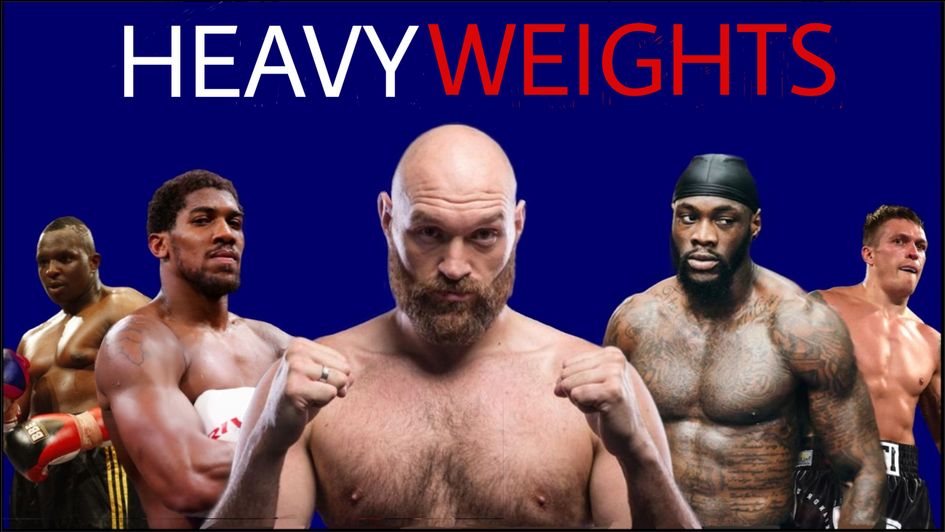 Where do we stand with the heavyweight division? (Pic: Amara Shaw)

Furyjoshua.com ranks the best heavyweights in boxing and asks where we might see them next as the division reacts to Tyson Fury's defeat of Deontay Wilder.

Boxing’s marquee division is in rude health currently, with some serious talent atop the heavyweight pecking order. Crucially, these men are keen to meet each other - and when the best fight the best, there is still no spectacle quite like it.

Here furyjoshua.com assesses the landscape and ranks the best big men around.

The heavyweight division had only just recovered from Anthony Joshua losing his IBF, WBA and WBO world titles to the brilliant Oleksandr Usyk when we were treated to another massive event last weekend.

Tyson Fury once again provided spectacular entertainment as he knocked out Deontay Wilder in Round 11 of their Las Vegas trilogy fight to end a slugfest for the ages.

That Joshua loss though - by unanimous decision at Tottenham Hotspur Stadium - means we will not get that much-hoped-for Fury vs Joshua showdown for a long while yet, and maybe never. File it under the long list of ‘fights which didn’t happen when they should have’.

Fury and Usyk currently hold all the major belts as we head into a crucial period for the division, with plenty more cracking fights to look forward to.

Such is the influence of the sanctioning bodies in the sport, which sadly often defy logic to push their own agendas, it has never been an easy task to impartially rank the heavyweights. Our list ignores the so-called ‘alphabet’ ratings in favour of a non-partisan system which ranks fighters based purely on their skillset, ring achievements, title victories and potential.

Fury is not only still unbeaten, but now unquestionably unrivalled at the top of our rankings after that epic victory over Wilder at T-Mobile Arena. As he did in their first meeting back in 2018, ‘The Gypsy King’ needed to get off the floor twice, but he showed incredible fighting heart and savvy to roar back to a comprehensive success. Bar those knockdowns - which both came in a traumatic fourth round for the Morecambe man - Fury was utterly dominant for most of a terrific fight. He once again used his considerable size (277lbs) to bully Wilder while beating up the American all the while. Fury is now likely to be told to defend his WBC title against fellow Briton Dillian Whyte - assuming ‘The Body Snatcher’ disposes of Otto Wallin later this month.

Usyk, the boxing grand master from the Ukraine, achieved the dream of becoming a world champion at both cruiserweight and heavyweight when he dethroned Joshua in London. He produced a terrific performance to outbox and outfight the defending champion. Not only did Usyk showcase that elite ringcraft and footwork we have seen so often, he was also willing to stand in the pocket and trade when the moment demanded it. An all-round performance for the ages which resulted in a deserved victory. A perfect professional record, world titles in two classes, an Olympic gold medal and an amateur ledger of 335-15 - Oleksandr now has quite the C.V. now. The frightening thing is both he and his camp said we didn’t see the best Usyk that night in north London, they believe there is yet more to come. Next up is set to be a rematch with Joshua, which was specified in their contract. February 2022 is the likely favourite in terms of timing, with the AJ camp preferring London as a venue again while Team Usyk would like the bout in Kiev.

Joshua has scaled the heavyweight mountain twice - and now he must try to do it for a third time. This time however it’s different, when AJ lost to Andy Ruiz Jr in 2019 there was a feeling of disbelief and that it was a one-off blip. This time Joshua was totally outboxed and outfought by Ukrainian maestro Oleksandr Usyk. The Ukrainian was too fast, too skilful and too strong for AJ as he punched his way to a comfortable unanimous decision (not sure where that 115-113 scorecard came from). Joshua enjoyed a meteoric rise to the top in the pro ranks after winning Olympic gold in London 2012, and he has the time to come again. But a drastically different gameplan and mindset is needed if he is to gain revenge against Usyk. He appeared ponderous and unable to pull the trigger in their first meeting, this wasn’t a close fight. In circumstances like this, the rematch only normally serves to reinforce what happened in the first fight. Can AJ turn the tide? It is undoubtedly the greatest challenge of his career so far, and one he must take on if he is to keep alive the dream of facing Fury in the future for all the marbles.

Wilder may have lost to Fury in their long-awaited trilogy match, but he left the ring not only on his shield but also with his reputation enhanced. ‘The Bronze Bomber’ came close to claiming the redemption he so craved when he had Tyson on the floor twice in the fourth. But just as in Los Angeles back in 2018, he could not do the necessary and nail the incredible Fury to the canvas. Deontay - who weighed in a career-heaviest 238lbs - appeared spent physically by the halfway stage and showed terrific heart and cojones to hang in there until Fury applied the coup de grace in the penultimate session. Reports afterwards suggested Wilder had broken his hand during the defeat, and now he must take a break to decide his future plans. He is still a huge danger to any heavyweight out there courtesy of that massive right hand, but it remains to be seen if the beating he took from Fury last weekend will have any lasting effects.

‘The Body Snatcher’ is back, and back from the brink. Whyte’s world-title dreams were shattered when Alexander Povetkin knocked him out at Matchroom Fight Camp last August. He described their March 27 rematch on Gibraltar as “must-win”, and win he did. Dillian dominated from the first bell en route to a crushing fourth-round stoppage victory. Not only did it return him to WBC interim champion status, it returned him to the very top table. Promoter Eddie Hearn wanted him to fight in the United States in the summer but that didn’t happen, and now he faces tricky Swede Otto Wallin in London later this month. The WBC has stated that should Whyte prevail, he will then get that long-awaited title shot vs Fury. We’ve been here before though and Dillian will be keen to avoid any last-minute slip-ups this time.

Ruiz returned from a 17-month absence to convincingly outpoint Chris Arreola in an entertaining scrap in California in early May. Andy had not been out since losing his world heavyweight titles in that rematch to Anthony Joshua in 2019. Gone was the flabby 283-pounder who was literally unable to throw his punches properly against Joshua the second time round. In his place a much more toned 256-pound frame and a new-found discipline. It wasn’t an easy night for Ruiz though - he was down in Round 2 and in trouble in the third before recovering to punch out a unanimous decision. The good engine and fast hands are still there, but questions still remain. We should get a better idea of the ceiling for the new Andy under Eddy Reynoso in his next bout. The likes of Luis Ortz, Wilder and Whyte would make for cracking matchups.

The 35-year-old Londoner cracked our top 10 by delivering a first professional defeat to the exciting prodigy Daniel Dubois last November. He then cemented that position by stopping veteran French warhorse Carlos Takam in July. The former Olympic silver medalist has a relentless style and a granite chin - he will be a nightmare for a lot of elite heavyweights. He seemingly copes with whatever opponents throw at him, and keeps on coming. Do not underestimate his ring savvy either - the win over Dubois showcased his ability to carry out a plan to perfection. Had been hoping to face Usyk for the WBO interim title but that was scuppered by the collapse of Fury vs Joshua.

The former WBO king is again pushing for a world-title shot, and he just about remained on course by pulling out a decision win over UK warhorse Dereck Chisora in May. Joseph was down inside seven seconds, but recovered from a terrible start to take control in the second half of a fascinating scrap. Like Ruiz, Parker was working with a new corner for the first time - Andy Lee replacing long-time head trainer Kevin Barry. So we would expect to see improvement next time round. A potential IBF eliminator against Filip Hrgovic did not happen, so instead it’s a rematch with Chisora in Manchester in December.

Few of the top heavyweights out there apparently want a piece of ‘The Bounty’ and it is easy to see why. The hugely talented 33-year-old Californian presents a difficult puzzle for any opponent to solve. Hunter has only lost once in the paid ranks, and that was at the very highest level against the aforementioned Usyk at cruiserweight. In his most recent assignment, Hunter met the overmatched Mike Wilson in a WBA eliminator in New York - and did exactly what was expected of him. That easy win though told us little we did not already know.

Sanchez advertised his future world-title credentials with a technically excellent unanimous decision over fellow unbeaten prospect Efe Ajagba on the Fury vs Wilder 3 undercard in Las Vegas. ‘The Cuban Flash’ was too slick and smart for Nigerian star Ajagba, who appeared unable to pull the trigger - such was the puzzle in front of him. Sanchez has fast hands, good movement and terrific footwork and wins his place in our top 10 on merit. The win over Ajagba may not have pleased all of the fans inside T-Mobile Arena, but his pedigree is there for all to see. Another fighter to hail from the all-conquering Eddy Reynoso stable, and one who is expected to step up again towards elite level soon.

Robert Helenius revived his world-title dreams at the age of 37 by claiming a second victory over Brooklyn-based Pole Adam Kownacki in Vegas. Helenius (31-3) was utterly dominant in further shattering any title ambitions held by Kownacki, some 19 months on from his shock victory in their first meeting.

Croatian star Filip Hrgovic is another unbeaten prospect who is part of an exciting young generation of heavyweights. He is now 13-0 after a demolition of the overmatched Marko Radonjic in September.

Hrgovic’s style, like that of Joyce, may not be one for the purist, but his combination of ability and brute force makes him difficult to beat and he is a fighter on the way up.

Tony Yoka remains unbeaten at 11-0 after stopping Petar Milas in Paris in September and the 2016 Olympic champion is expected to be out again before the end of 2021. He always gives the impression that there is plenty more left in his locker.

Daniel Dubois (17-1) had been tipped for the very top before that shocking first pro defeat at the hands of Joyce last November. He is now fully healed after suffering a fractured eye socket that night.

He returned in style with a second-round knockout of Bogdan Dinu to claim the WBA interim title, and followed up with an easy defeat of Joe Cusumano on his Stateside bow in August.

Top Rank prospect Jared ‘Big Baby’ Anderson is some way from being considered for our top 10, but the exciting 21-year-old is absolutely heading in the right direction. He was another heavyweight to appear on that stacked Fury vs Wilder undercard, and he was impressive in disposing of Vladimir Tereshkin inside two rounds. Bigger and better things beckon.