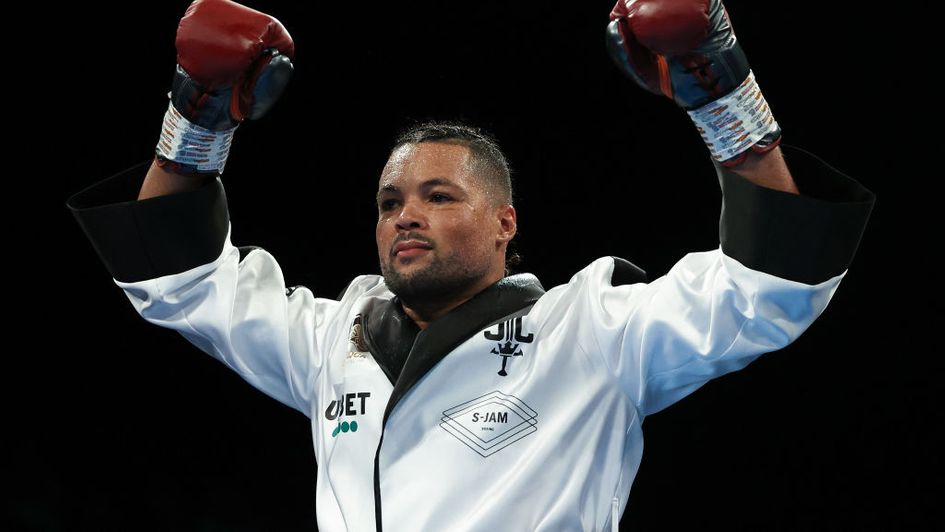 Chris Oliver got last weekend's big fight bang on and now looks ahead to Joe Joyce v Joe Parker plus the pick of Saturday's action elsewhere.

It's the battle of the Joes in Manchester this weekend as Messrs Parker and Joyce clash in an intriguing heavyweight contest, live on BT Sport Box Office.

Ranked one and two with the WBO, it's refreshing to see them not sitting on their positions with low-key fights and, instead, they have chosen to duke it out in order to determine who will be first in line when an opportunity arises for a crack at the title, currently held by Oleksandr Usyk.

Joyce is the higher ranked and he's the favourite at 4/7, but Parker is a former champion, and plenty will feel his top price of 7/4 is too big. Fans and pundits appear split on the outcome of this one and it may well be a little tighter than the odds suggest.

Since a harsh decision saw him pick up silver instead of gold at the 2016 Olympic games, Joyce has steamrollered his way up the heavyweight ratings by stopping 13 of his 14 victims up to this point. The highlight was his excellent victory over Daniel Dubois in late 2020 when, despite starting a big underdog, he broke down the big-punching prospect and forced him to quit in the 10th round of that British, Commonwealth and European title contest. Gatekeepers Carlos Takam and Christian Hammer have been stopped in six and four rounds respectively since, but this represents Joyce's biggest test to date.

It was nearly six years ago now that Parker captured the WBO title in his native New Zealand with a points win over Andy Ruiz, form which was franked by the latter's subsequent stoppage of Joshua. However, that was after Joshua had taken the belt from Parker in his third defence via a wide-margin decision in a largely uneventful fight at Cardiff's Principality Stadium in March 2018. Parker suffered another defeat just four months later, when dropping a unanimous decision to Dillian Whyte in their up-and-downer at the O2 in London, and he has been rebuilding ever since.

Six straight wins have followed, with the last two under the guidance of new coach Andy Lee, and Parker showed notable improvements in his second, back-to-back points wins over Derek Chisora when last seen in December. Parker and Lee have promised more improvements on Saturday, but will that be enough?

What makes this such an interesting match-up is their contrasting styles. Joyce's nickname of 'The Juggernaut' could not be more appropriate, as the man from Putney just keeps on coming forward and his huge engine ensures that momentum doesn't stop for 12 rounds. Parker is the more technically gifted of the two and he puts his punches together very well when he lets his hands go. So, it's the immoveable object of Joyce versus the skills of Parker.

Ever since Joyce, who can look cumbersome and pedestrian, turned professional his critics have assured us he is too slow and will be found out sooner rather than later. Yet nobody has come close to beating him and his style, although crude, has proven very effective so far. His lack of speed and head movement can make him easy to hit, which was really highlighted against Takam and Hammer as he took several big right hands early on before wearing down and stopping them both. Those heavy blows barely seemed to register on Joyce as he kept on marching forward and that must be unnerving if you're in the opposite corner.

Parker should have no problem finding a home for his shots early doors. Making the most of his quicker hands and feet, he can fire off rapid combinations and maintain the distance with his quicker feet, just as he did in the rematch with Chisora, who was given a count on three occasions. However, as we also saw in that same contest, Parker often looks uncomfortable under constant pressure and, despite the beating he gave 'Del Boy' that night, he was still drawn into a gruelling war down the stretch. That will have given plenty of hope to Joyce, who is a lot more dangerous and relentless than a fading Chisora.

Both have shown good chins and while Parker has been down before, he has always rallied back and is not short on heart. The knockout percentages clearly point to Joyce being the puncher here, but Parker certainly carries enough of a dig to get his opponent's respect, albeit probably not enough to crack the granite jaw of the British fighter.

This looks set to be a tale of two fights. Given Joyce's tendency to start slow and Parker's superior speed, the Kiwi is likely to be doing the eye-catching work in the first six rounds and can score big with his single right-hands and sharp combinations. The question is whether he can open up a big enough lead before the constant forward motion of Joyce begins to take its toll and his size and stamina can become the key factors after halfway. At 6'6" and with stamina that belies his huge frame, Joyce is extremely tough to keep off for 12 rounds and attempting to do so will be a very tiring task for Parker, both mentally and physically.

Parker's best chance of victory is seemingly boxing his way to a decision and that outcome can be backed at 100/30, which could look big after five or six rounds. However, I feel anyone who takes those odds will be feeling increasingly uncomfortable, just like Parker, as the fight progresses.

It is expected to be one-way traffic late on and Joyce breaking down the underdog between rounds 7-12 at 5/1 is a possibility, but I see the most likely outcome being JOYCE EARNING A HARD-FOUGHT DECISION at 6/4. He is yet to be stopped in his tracks and the relentless force of 'The Juggernaut' could prove too overwhelming once again.

Ready for the step up, Kid?

There is also a show on DAZN from Nottingham, which goes ahead despite the original top of the bill match between local boy Leigh Wood and Mauricio Lara being postponed.

The headliner is now a Yorkshire derby between Maxi Hughes and KID GALAHAD, with the outcome all about how the latter handles the move up in weight.

After losing narrowly when challenging for the IBF featherweight title against Josh Warrington in 2019, Galahad captured the same belt two fights later with a brilliant performance against 'Jazza' Dickens (RTD11) and was then an overwhelming favourite in what appeared a routine first defence against Kiko Martinez. It looked to be just that as he coasted through the contest with little fuss, until he was dropped with a huge right hand at the end the fifth round and then sparked out with the first punch of the following session.

Things are heating up between Maxi Hughes and Kid Galahad 🔥

Blaming weight-making issues for the loss, the Sheffield fighter now steps up two divisions to lightweight and takes on a man in the form of his life. Hughes has lost five of his 32 bouts (two draws) but is on a run of six straight wins and has taken his career to new heights with points victories over Jovanni Straffon and Ryan Walsh on his last two outings.

The oddsmakers suggest the pedigree of Galahad (4/7) will prevail over the momentum of Hughes (7/4), but the favourite is the newcomer to the weight and has to prove there are no demons after being brutally knocked out 10 months ago.

With a cagey boxing match expected between these two southpaws, this has 'distance fight' written all over it and that is reflected in the 4/7 about it going the full 12 rounds. Hughes will make sure this is no easy night's work for the former world champion, but Galahad has mixed in much better company and his superior skills and experience can tell as the fight develops.

GALAHAD BY DECISION is the call at 13/8.

Rankin underrated by the layers

Also taking a big step up in weight is Terri Harper, who challenges HANNAH RANKIN for her super welterweight world title on the undercard.

Harper is a former world champion but that was at super featherweight, which is a whopping 24lb south of the limit she fights at here and I wouldn't be rushing in to take the best price of 4/11 about her becoming a two-weight belt holder. As well as the huge leap up in weight, her fourth-round stoppage loss to Alycia Baumgardner when losing her title 10 months ago remains fresh in the memory.

Admittedly, jumping up and down the divisions is more common in the female game and, given the 10 x two-minute rounds format, Harper may be able to utilise her speed to avoid being caught with anything meaningful to claim a points victory (4/6). However, the 3/1 about the champion looks worth chancing given the difference in size.

Rankin may have lost to Claressa Shields (UD) and Savannah Marshall (TKO7), but she has been in with the very best around and those defeats were both up at middleweight. Having dropped back to 154lb to win a title, she will be full of confidence and rates the value bet against the smaller Harper.