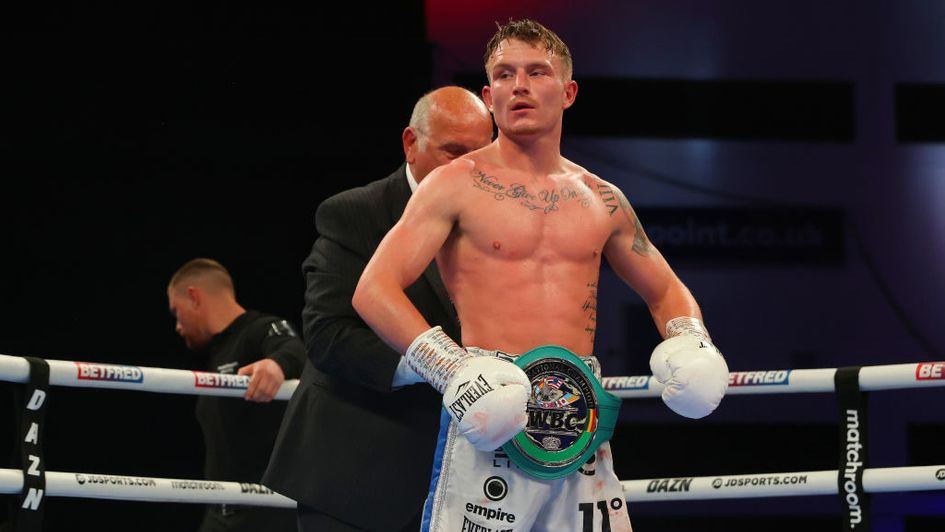 We have top-class boxing action either side of the Atlantic on Saturday, and Chris Oliver is backing Vergil Ortiz Jr to keep up his knockout streak.

It's all about the prospects this Saturday night with two shows on DAZN from either side of the Atlantic.

The action on these shores comes from Sheffield, where the highly-promising Dalton Smith gets the chance to shine in front of his home fans in a local derby with Sam O'Maison.

The vacant British super lightweight belt is on the line and, in a crowded domestic scene at 140lb, the winner can look forward to some potentially lucrative defences of the title. Given his impressive progress over the last couple of years, it's hard to see anything but that winner being Smith.

With a perfect record of 11-0 (nine early), Smith is a best price of 1/20 after a string of impressive performances that have seen him progress with each outing, and his two performances this year have been his best. The 25-year-old dominated Ray Moylette before stopping the Irishman in the last session of their 10-round clash in March, before forcing Mauro Perouene's corner to withdraw their man after six one-sided rounds in June.

The Sheffield Wednesday fan moves very well but it is his timing and accuracy that really stand out, as he wastes very little and usually makes it count when he throws.

On paper, O'Maison (17-3) represents a very good test for Smith at this stage of his career, especially on the form of his two fights with the useful Kay Prospere. Following a draw first time around, the Yorkshireman dropped a tight decision in the return and there was very little between the pair over 20 rounds.

However, a long period of inactivity followed and, since that rematch in September 2019, O'Maison's only action has been a four-round points victory over journeyman Sege Ambomo in May this year. O'Maison would ideally have wanted another outing before this title tilt and that lack of recent ring time makes an already tough task even tougher.

Two of O'Maison's three defeats have come by stoppage and it's 1/6 that he is halted again here, with Smith's hands expected to prove too heavy. However, the favourite likes to do a lot of his work on the back foot and look to catch his opponents coming in with stinging counters, most notably a crisp left hook.

That, along with O'Maison's tricky southpaw style, means that the 8/13 about Smith to win in rounds 1-6 looks a bit too short for my liking. Smith is expected to get his 10th stoppage at some point, but the better value may be for that to come in the second half of the contest at 11/4, with the cool and patient favourite likely to be in no rush to get his man out of there early doors.

Rising stars Hopey Price, Johnny Fisher, Campbell Hatton and Aqib Fiaz are all expected to maintain their unbeaten records in South Yorkshire, but the fight of the card could well be the rematch between Sandy Ryan and Erica Farias.

The pair thrilled the crowd with a 10-round war in Nottingham earlier in the year, when the latter got the nod from the judges with a split decision, and thankfully we get to see them do it again.

That was Ryan's first loss, but it was a tough ask in only her fourth professional outing and she lost little in defeat as a result. The 28-year-old from Derby will have learnt a great deal from that contest and, available at 4/9 (as short as 1/3), the layers fancy her to have gained enough from that defeat to exact revenge. That may well be the case, and she does have size and youth on her side, but the 7/2 available about Farias repeating the dose with another points success is too big to ignore.

While one judge gave the first fight to Ryan, Farias looked a clear winner to most observers as her high punch output and aggressive style seemed to overwhelm the home fighter at times. The Argentinian was much the busier for long periods of the bout, maintaining her double-handed attacks to both head and body, and we can expect more of the same.

She may be 38 now, but she didn't appear to be slowing down that night and has a wealth of experience as a former two-weight world champion. She came into the first fight on the back of three defeats, but they were in world title attempts against Jessica McCaskill (twice) and Mikaela Mayer, and she pushed those world-class operators to hard-fought decisions in each of them.

It's the youth and power of Ryan versus the experience and work rate of Farias and, at the prices, the latter makes the most appeal in what is likely to be a tight contest.

Ortiz's rise through the welterweight ranks has been as ferocious as it has been impressive, with 18 knockouts from 18 outings, and he is considered by many to be the heir to the throne at 147lb. This is a huge task for McKinson, who is also unbeaten but has done most of his work away from the bright lights of big TV shows and he has only stopped two of his 22 victims.

Just as their knockout ratios are very different, so, too, are their styles. While Ortiz is all about power and unleashing hell with his vicious combinations, McKinson is a slick and tricky customer who likes to box on the back foot and look to pick you off with counters.

This fight was originally due to take place in March, but Ortiz was forced to withdraw due to rhabdomyolysis, which is the breakdown of muscle tissue and can be harmful to the kidneys, and McKinson instead outpointed late replacement Alex Martin. Assuming Ortiz is fully recovered - and he insists he is - then a 9/1 surprise victory for McKinson looks very unlikely.

The underdog is adept on the back foot and is capable of frustrating Ortiz with plenty of movement and his left-hand jab, but the question is for how long? Those tactics will be tiring and, without the pop on his punches to keep Ortiz off, McKinson will have to taste the power of the 1/12 favourite at some point and that could be when the gameplan unravels.

I fancy Ortiz to continue his impressive knockout streak and for that to be somewhere in the second half of the fight (13/8).