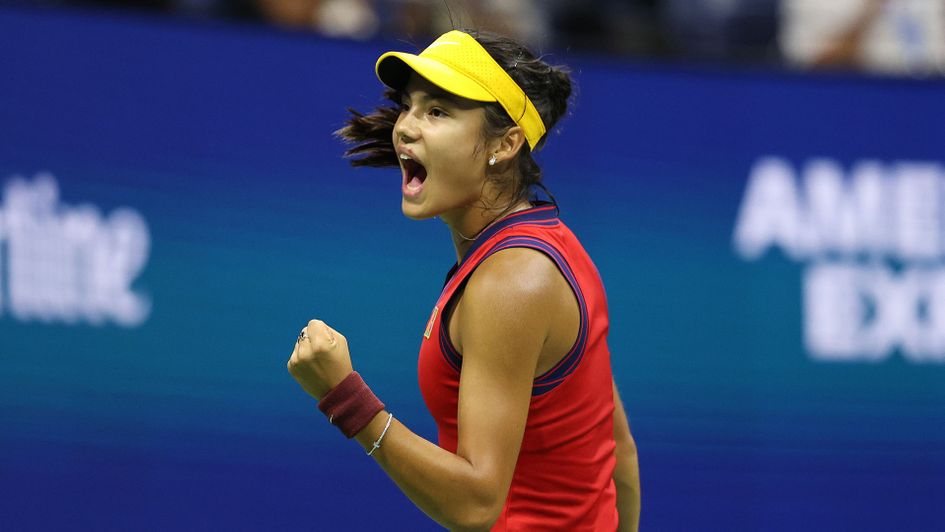 Britain's Emma Raducanu faces Canada's Leylah Fernandez in an historic US Open final in New York on Saturday night so check out our preview and best bets.

British sensation Emma Raducanu is gearing up to face Canada's Leylah Fernandez on Saturday night (2100 BST, Channel 4 & Amazon Prime) in the first all-teenage Grand Slam final this Millennium - but whose fairytale of New York will end in US Open glory at Arthur Ashe Stadium?

The 19-year-old is not only the first qualifier - man or woman - to reach a Grand Slam final but she's also the first British woman to get this far since Virginia Wade won Wimbledon in 1977.

Raducanu, who is incredibly yet to drop a set, is also the fourth debutant in US Open history to reach the final and the first British woman to do so since Wade triumphed here in 1968.

She's also bidding to become the first player in history to win a Grand Slam as early as the second attempt having made her bow at Wimbledon ranked 361 in the world earlier this summer. Now she'll be now lower than 31 in Monday's rankings.

Raducanu is 4/7 favourite while Fernandez is the marginal outsider at 11/8.

Here we preview the final with Andy Schooler's betting tips while we also have their routes to the final, tale of the tape, latest odds and also details of where and when to watch.

There’s often a lot of hype surrounding British sport and some will have already added the Emma Raducanu story to that pile.

Hers is some story and she has rightly been centre stage in the UK media in recent days.

But amid all the Em-mania (sorry) it’s been too easy to forget the remarkable tale of the player who will be on the other side of the net in Saturday’s US Open final, Leylah Fernandez.

She only turned 19 a few days ago and is ranked just 72nd in the world. Were it not for Raducanu, there’s every chance Fernandez’s beaming smile would have been on the front pages of the UK national newspapers.

Fernandez is the underdog ahead of this match yet, on paper, her wins in New York over the past fortnight have been the better of the two finalists.

She’s beaten three of the world’s top five – defending champion Naomi Osaka, Elina Svitolina and Aryna Sabalenka – while her dismissal of the 2016 winner Angie Kerber should not be forgotten either.

🤔 Fernandez has beaten star names but after all that time on court, will she have enough left to stop Raducanu, who has wiped the floor with everyone! Who wins?

She’s also battle-hardened having won each of those contests in three sets. The player herself was quick to highlight just that in the wake of her semi-final victory, saying: “My mental toughness, that's been a huge plus for me.”

Remarkably all of her matches have lasted at least 105 minutes yet none of Raducanu’s has got that far.

That shows how incredible the Briton’s run has been – it’s not just that she’s beaten a string of higher-ranked players, it’s that she’s destroyed them.

She’s yet to lose a set – and it’s also interesting to note she beat Fernandez in Junior Wimbledon three years ago - but what we still don’t know is what will happen if the pressure gets turned up.

And I certainly feel Fernandez’s game, which strikes the right balance between attack and defence, is capable of testing her younger opponent.

Taking out the first few games, she coped well with the huge power of Sabalenka in their semi-final and didn’t allow herself to get pushed too far back.

Sabalenka spoke afterwards about how Fernandez had managed to stay on or close to the baseline and seemed a tad surprised about it.

Her vanquished semi-final foe, Maria Sakkari, suggested the result of their match had as much to do with her bad performance as Raducanu’s excellence.

“I gave her so many chances,” she bemoaned, before dragging Raducanu’s quarter-final opponent, Belinda Bencic, into the conversation.

"We did not bring our best performance,” she added.

Perhaps there was some sour grapes involved in those comments but if her assessment was close to the truth, then this seems unlikely to be the romp of Raducanu’s previous rounds.

There’s no doubt both players have played some brilliant tennis during this tournament and they’ve got to the final in very different ways.

I’ve liked what I’ve seen from both players but, for me, the quality Fernandez has beaten is notable here.

Raducanu is playing like a top-10 player but the Canadian – likely to have the majority of crowd support - has taken these down with regularity and my feeling is that Raducanu may struggle to hit through her like she’s done to virtually all her opponents thus far.

Therefore 6/4 about the underdog looks the play here.

For those seeking something bigger, another three-set win for Fernandez is offered at 9/2 which is tempting.

Amazon had the exclusive rights holders in the UK, meaning fans must sign up for Amazon Prime in order to watch the match live - but they have since agreed a deal with Channel 4 so they can also share the live coverage, which begins at 2000 BST.

An Amazon Prime Video subscription costs £5.99 while full Prime membership is £7.99 per month or £79 annually – with customers able to sign up for a one month free trial.

The BBC has also secured rights to show the highlights from the final on Sunday afternoon, while live commentary on the final will also be available via BBC Radio 5 Live.

Routes to the US Open final

Raducanu’s ambitions on her US Open debut centred around getting through qualifying, which she did without losing a set. Since then, the 18-year-old has steam-rollered her way through the draw, losing just 27 games in six matches. Her victims have included Olympic gold medallist Belinda Bencic and 17th seed Sakkari. Raducanu has appeared shocked and delighted throughout.

Fernandez has undoubtedly had a tougher draw, making her first big splash by upsetting defending champion Naomi Osaka in round three. She followed that up by knocking out another former winner in Angelique Kerber, fifth seed Elina Svitolina and second seed Aryna Sabalenka, all in tough three-set contests. She has spent more time on court than Raducanu despite playing three fewer matches but her belief has been evident throughout, with Fernandez saying after beating Kerber that she was not surprised by her achievements.