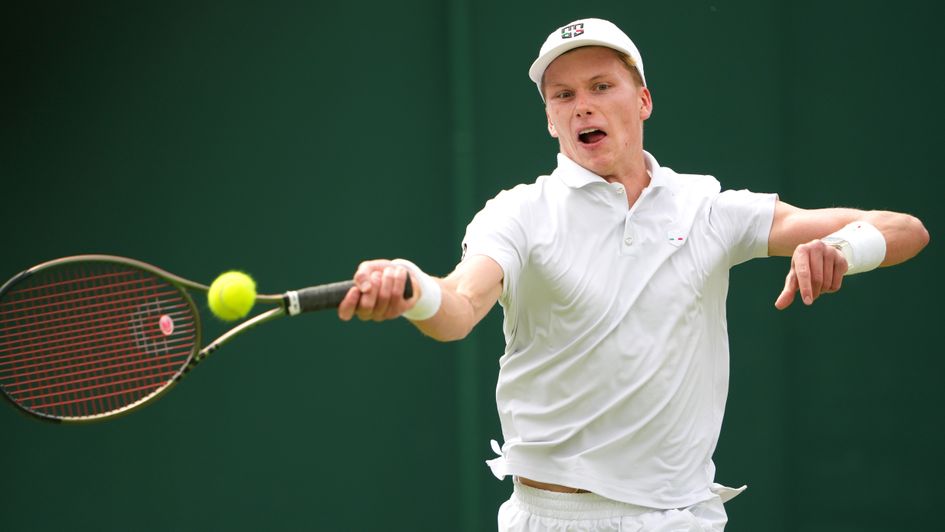 Tennis betting tips: Preview and best bets for the ATP Tour in Metz and San Diego

Our tennis man Andy Schooler has five tips, ranging from 5/1 to 50/1, for this week’s ATP action in Metz and San Diego.

Deposed world number one Daniil Medvedev makes a quick return to action on the ATP Tour this week and he starts as the odds-on favourite in Metz.

However, while I can see why the bookies are wary of the Russian, I also think that’s a bit short.

The other big name in the field is HUBERT HURKACZ and I don’t see why he should be so much bigger, especially given the pair can’t meet until the final.

The Pole, who won this title a year ago without losing a set, is out at 13/2 which I simply can’t ignore.

Helped by his big serve, Hurkacz’s game works well in quick conditions, which is what he’ll get this week – they play on a Slamcourt surface in the French city.

Hurkacz highlighted that on Halle’s grass earlier this year where, significantly, he crushed Medvedev 6-1 6-4 in the final.

In fact, he holds a winning record against Medvedev, also beating him on the Miami hardcourts this season (again in straight sets).

In last season’s three meetings, Hurkacz won at Wimbledon, lost 7-6 in the third in Toronto (a match he really should have won) and was also beaten in a final set at the ATP World Tour Finals.

I don’t think Hurkacz would be going off a huge outsider in any final with Medvedev – he certainly shouldn’t be – and it’s hard not to believe the outright market is skewed too heavily in the Russian’s favour.

I’m not even sure you can argue that Medvedev has the easier half of the draw to negotiate.

OK, Dominic Thiem could be a tricky opening foe for Hurkacz, after all he did reach a Challenger final at the weekend so is bedded into indoor conditions.

However, Thiem won just three games in that final so it’s hard to argue he’s arriving here brimming with confidence.

Nikoloz Basilashvili, who has lost his last 14 sets, is seeded to face Hurkacz in the last eight, while then it could be Lorenzo Musetti or Aslan Karatsev.

Frankly, it’s a section Hurkacz should be coming through.

In the top half, potential banana skins for Medvedev include Winston-Salem champion Adrian Mannarino and Alexander Bublik, who has the tools to beat anyone on his day indoors if his head is screwed on properly.

However, it’s another player I’m happy to back at a tasty price in tis section and that’s UGO HUMBERT.

There’s no doubt 2022 has been a disappointing year for the Frenchman but we also know this is a player with plenty of talent and a game, when it’s on, that is made for slick indoor conditions.

He’s happy to come in behind his big, lefty serve and significantly he was doing just that in Rennes over the past week, winning the Challenger title there in some style.

He didn’t drop serve or a set all tournament and destroyed Thiem in Sunday’s final.

That looks the sort of week which could really kickstart Humbert back into the sort of form which saw him win three ATP titles in past two seasons and climb as high as 25th in the world rankings.

OK, he’s facing a quick turnaround here but I don’t expect conditions to be hugely different than in Rennes. The same can’t be said about opening opponent Benjamin Bonzi, who arrives from much slower courts in Hamburg where he was beaten three times out of three in the Davis Cup.

Further down the line, he could face Medvedev in the last four.

But the Russian is the biggest scalp on Humbert’s record this season – he defeated him at the season-opening ATP Cup – and he also won their other meeting, on clay in 2020.

Playing on home soil at an event which has been won 11 times out of 18 by French players, Humbert looks a decent bet at 33/1.

JENSON BROOKSBY is a player I’ve mentioned positively on these pages in the past and this week he looks to have a great opportunity to capture his maiden ATP Tour tile.

Thanks largely to his incredible ability to cover the court, the speedy 21-year-old look to have a bright future and, having already reached two finals this season, San Diego could be a case of third time lucky.

Brooksby is one of only two top-50 players in the field and he arrives in decent nick.

During the North American hardcourt season, he’s already made the final in Atlanta before reaching the third round of the US Open only to find eventual champion Carlos Alcaraz in his path.

I was actually a little disappointed Brooksby couldn’t push Alcaraz harder – he lost in straight sets – but there’s no-one near the Spaniard’s class here this week with Dan Evans the other player in the top 50 in attendance.

While he’s a slightly shorter price than Brooksby, I’m not convinced about his motivation this week.

Essentially, Evans is stopping off in San Diego en route to tournaments in Asia over the following fortnight and he does so having come straight off Davis Cup duty in Glasgow where GB suffered the disappointment of an early exit on home soil.

Evans was well beaten by Tommy Paul in Scotland where he was still cheering for his team on Sunday evening.

OK, with a first-round bye, he might not have to play his opener until Thursday but it’s still a far-from-ideal turnaround.

Brooksby, in contrast, will be fully prepared.

He didn’t play Davis Cup and the Californian will have been able to practise in these conditions for some time – for the record they are playing on Laykold, a surface used at the recent US Open, plus several of the warm-up events.

At what is really his home tournament, Brooksby is the call at 5/1.

While I'm confident enough about Brooksby, it’s worth having a look at potential value further down the market because if the ‘big two’ do fall early then this event is going to be wide open.

A couple of names are of interest, one in each half.

In the top section, that of Evans, STEVE JOHNSON is another player who’ll be happy to be playing in his home state, particularly given he’s a family man these days.

While it’s fair to say the best days are probably behind the 32-year-old, he’s still capable of being competitive in a field this weak, especially if he continues to play as he’s been doing over the past couple of months.

Johnson has beaten Adrian Mannarino, Thanasi Kokkinakis and Pedro Martinez (this week’s fourth seed) on a hardcourt this summer and while there’s no big name there, it is exactly the sort of list someone may face en route to the final this week.

Johnson has also suffered narrow losses to Felix Auger-Aliassime and Ilya Ivashka recently which to some extent helps back up the sense he’s playing fairly well right now.

The American could meet Evans in the last eight but I think he’s still worth a small punt at 25/1.

In the bottom half, the man I like at a big price is MARC-ANDREA HUESLER.

The Swiss is in the form of his life having made the semi-finals in Winston-Salem, where he beat both defending champion Ivashka and rising star Jack Draper.

At the US Open the following week, he pushed seed Denis Shapovalov the full five sets.

He’ll arrive off the back of a Davis Cup tie in Ecuador - helpfully, on a hardcourt - where he won his opening rubber on Saturday (this preview was written before Sunday’s play).

Key to recent success has been the 6ft 5in star’s serve.

It’s obviously coming down from quite a height but Huesler is doing plenty with it.

In Winston-Salem (including qualifying), he won 78% of points behind his first serve and 64% behind his second, proving a tricky customer for every opponent.

The courts in San Diego should help a bit on that front and at 50/1, I definitely think he’s worth a poke.