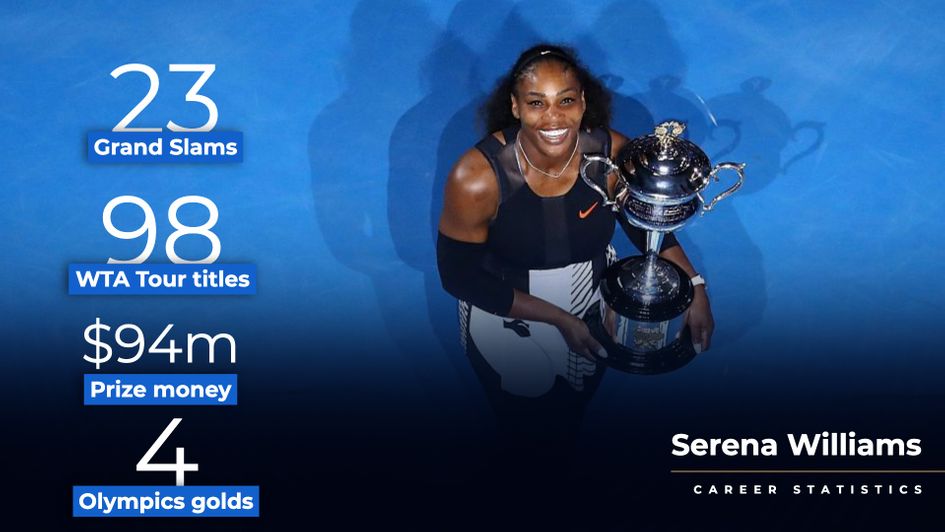 Serena Williams has announced her imminent retirement from tennis.

The 23-time grand-slam champion won her first singles match for more than a year at the National Bank Open in Toronto on Monday evening but has revealed in a first-person piece for Vogue that she has decided to end her career.

“I’m here to tell you that I’m evolving away from tennis, toward other things that are important to me,” she wrote.

Williams has committed to playing at the Western & Southern Open in Cincinnati next week as well as the US Open later this month, and it appears that will be her final tournament.

Quite simply, Serena Williams is an absolute legend. pic.twitter.com/o19nDWXew2

“Unfortunately I wasn’t ready to win Wimbledon this year,” said the 40-year-old.

“And I don’t know if I will be ready to win New York. But I’m going to try. And the lead-up tournaments will be fun.

“I know there’s a fan fantasy that I might have tied Margaret (Court on 24 slam singles titles) that day in London, then maybe beat her record in New York, and then at the trophy ceremony say, ‘See ya!’

“I get that. It’s a good fantasy. But I’m not looking for some ceremonial, final on-court moment. I’m terrible at goodbyes, the world’s worst.”

Williams revealed her motivation behind calling it quits is the desire to have a second child, and that she was trying for another baby during her absence from tennis for a year until Wimbledon this summer.

She returned to the sport early in 2018 following the birth of daughter Olympia the previous year having been pregnant when she won her last slam title at the Australian Open.

“I’m turning 41 (in September), and something’s got to give,” she wrote in Vogue.

“In the last year, Alexis and I have been trying to have another child, and we recently got some information from my doctor that put my mind at ease and made me feel that, whenever we’re ready, we can add to our family.

“I definitely don’t want to be pregnant again as an athlete. I need to be two feet into tennis or two feet out.”

Williams admitted the decision to leave tennis is a hard one, saying: “It’s the hardest thing that I could ever imagine. I hate it. I hate that I have to be at this crossroads. I keep saying to myself, ‘I wish it could be easy for me’, but it’s not.

“I don’t know how I’m going to be able to look at this magazine when it comes out, knowing that this is it, the end of a story that started in Compton, California, with a little black girl who just wanted to play tennis.”

“The countdown has begun” @serenawilliams, forever a legend ❤️ pic.twitter.com/SAlSCm8BEz

23 – Grand slam singles titles, the most in the Open era for any man or woman

4 – Olympic gold medals, one in singles and three in women’s doubles

34 – The longest match winning streak of her career, from February to June, 2013

35 – At 35 years, four months and two days when she triumphed in Australia in 2017, Williams is the oldest woman to win a singles grand slam title