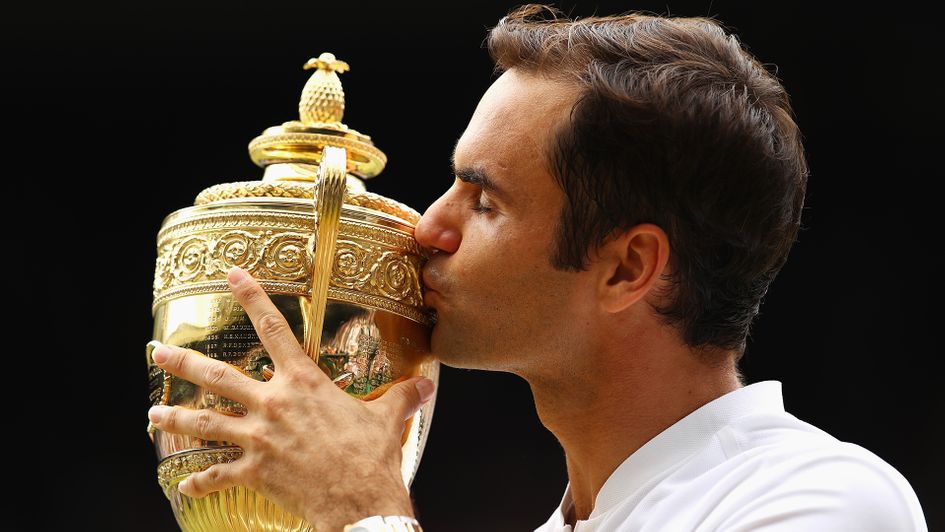 Roger Federer has brought the curtain down on his illustrious career so we take a look at his incredible statistics, memorable moments and tributes.

The 41-year-old Swiss legend decided the Laver Cup in London would be his final ATP Tour event of a career which began back in 1998 and saw him become widely considered the GOAT despite being surpassed in the Grand Slam title race by Rafael Nadal and Novak Djokovic.

Here, we chart all his major stats before a collection of videos displaying some mind-boggling shots and footage from all his Grand Slam final victories.

🤯 Remember when Roger Federer won the longest rally in a #Wimbledon final against Novak Djokovic.

🙌 35 shots and the crowd went wild...pic.twitter.com/5qOUrKeva0

One of the most iconic rivalries in world sport.

This spectacular winner from Roger Federer in his last ever meeting with Rafael Nadal in 2019 has to be up there with one of his best.

Happy retirement to the GOAT.pic.twitter.com/ay7ANfPrGR

Time for a Fed thread, starting with this.

Sit back and watch 🔟 of the best shots from Roger Federer's glittering career 🤩🍿@RogerFederer | #RForever pic.twitter.com/HiOHacmSrb

🎾 Roger Federer and Rafael Nadal hit 149 winners between them in their epic 2008 Wimbledon final.

👌 And the best two happened in consecutive points of an epic fourth set tiebreak...pic.twitter.com/XLpvVMWC5A

There was only one Roger Federer. ☝️

Roger Federer fulfilled the potential he'd shown two years previously when stunning Pete Sampras by winning his maiden Grand Slam title at the All England Club in commanding fashion. He dropped only one set, to Mardy Fish in the third round, and beat Mark Philippoussis in the final.

Federer's dominance of the men's game well and truly began in 2004 with the Australian Open, where he came through tough matches against Lleyton Hewitt and David Nalbandian before seeing off Marat Safin in the final.

As the new world number one, Federer defended his title by winning the first of the three Wimbledon finals he would have against Andy Roddick.

😢👏 Roger Federer is retiring. Farewell to the GOAT.

His third Grand Slam of the season came with a commanding victory over Hewitt that included two 6-0 sets. Federer's only struggle came against Andre Agassi over five sets in the quarter-finals.

Federer was making Wimbledon his second home with a third successive SW19 title and once again it was the big-serving Roddick who finished runner-up. His only dropped set came against Nicolas Kiefer in round three.

Federer made it a double double of Wimbledon and US Open titles after overcoming Hewitt in the last four and Agassi in the final.

Federer defeated surprise package Marcos Baghdatis in the final to give him his first shot of holding all four Grand Slam titles at the same time but his hopes were ended by Rafael Nadal in the French Open final.

Federer got his revenge against Nadal as they met for a second straight Grand Slam final and their first at Wimbledon.

Federer continued his dominance over Roddick but this time in the US Open final as the Swiss star won a third Grand Slam title in a season for the second time in his career.

Federer saw off Fernando Gonzalez in straight sets to make it nine titles from 13 Grand Slams while he'd earlier experienced his first major meeting with Novak Djokovic in the fourth round.

Federer bounced back from another French Open defeat to Rafael Nadal in five sets to get the better of the Spaniard again at Wimbledon to make it five successive titles at SW19.

Federer's first Grand Slam final with Djokovic ended in straight sets as he became the first man in the open era to win four consecutive US Open titles.

Federer halted a barren run of 12 months without another Grand Slam by denying Andy Murray glory in his first major final.

Federer took advantage of Nadal’s shock defeat to Robin Soderling at Roland Garros by overcoming the Spaniard’s conqueror in the final. This would be his only French Open triumph.

Federer’s incredible summer continued with his third Wimbledon final win over Roddick - but this was a titanic battle of the ages as he came through 16-14 in the fifth set. Two weeks later Federer’s wife Mirka gave birth to their first set of twins.

After the disappointment of missing out on a fifth successive US Open title, Federer ousted Andy Murray in the Australian Open final.

Federer was going through the first testing period of his career but he came through it in style by handing Murray his fourth Grand Slam final defeat.

Four-and-a-half years had passed since his 17th title but he defied his recent injury struggles by stunning his arch rival Nadal in five captivating sets.

Roger Federer’s #18 is one of the most incredible sporting moments of all time. No debate. pic.twitter.com/Pxt01SU29y

Federer’s resurgence towards the top of the tennis world continued with a record eighth Wimbledon title. He didn't drop a set either and crushed Marin Cilic in the final for the loss of just eight games.

Federer’s 20th and final Grand Slam title saw him successfully retain the trophy in Melbourne - although his only two dropped sets in the tournament came against Cilic in the final.

This from the day of #Federer's final Grand Slam title success, the 2018 Australian Open.pic.twitter.com/qCwwAaxclU

Serena Williams: “I wanted to find the perfect way to say this, as you so eloquently put this game to rest – perfectly done, just like your career.

“I have always looked up to you and admired you. Our paths were always so similar, so much the same. You inspired countless millions and millions of people – including me – and we will never forget.

“I applaud you and look forward to all that you do in the future. Welcome to the retirement club. And thank you for being you.”

Wimbledon: “Roger, where do we begin? It’s been a privilege to witness your journey and see you become a champion in every sense of the word.

“We will so miss the sight of you gracing our courts, but all we can say for now is thank you, for the memories and joy you have given to so many.”

The ATP Tour: “You changed the game, #RForever. ”

ATP chairman Andrea Gaudenzi: “Roger’s impact on tennis, and the legacy he’s built, are impossible to overstate. Over 24 years as a professional, Roger brought millions of adoring fans into the game.

“He spearheaded an incredible new era of growth and elevated the popularity of our sport. Few athletes have transcended their field in such a manner. Roger made us all feel proud and fortunate to be part of the same sport.”

“He has the most complete game of his generation & captured the hearts of sports fans around the world with an amazing quickness on the court & a powerful tennis mind. He has had a historic career w/memories that will live on and on.

“Congratulations, Roger Federer. We wish you the very best as your journey continues.”

US Open champion Carlos Alcaraz: “Roger has been one of my idols and a source of inspiration! Thank you for everything you have done for our sport! I still want to play with you! Wish you all the luck in the world for what comes next!”

Andy Roddick, who lost three times to Federer in the Wimbledon final: “Cheers Roger. Thanks for the shared memories my friend. It was an honor to share time/experiences on the most hallowed grounds in our sport. Don’t be a stranger. Also, seems like a good time to start training for Wimby. (Obviously kidding)”

Juan Martin del Potro: “I LOVE YOU, Roger. Thank you for everything you’ve done in tennis and with myself. Tennis world will never be the same without you.”

Judy Murray: “The end of a magnificent era……”

Rod Laver: “Thank you for everything Roger. See you soon. Rocket.”

Petra Kvitova: “Roger – you have always been such a huge inspiration to me. Your elegance, your grace, your beautiful game. I have always held you in the highest regard and want to congratulate you for an amazing career. Tennis won’t be the same without you! Thank you.”