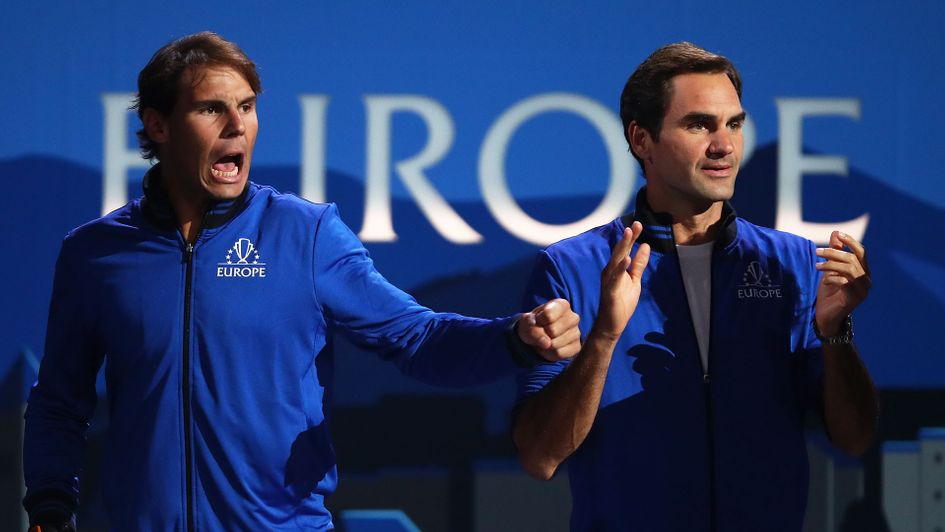 Roger Federer with Rafael Nadal at the 2019 Laver Cup

Laver Cup: Roger Federer hoping to team up with Rafael Nadal in his last ever tennis match before retirement

Roger Federer will bring the curtain down on his illustrious career with a doubles match in London on Friday night – and he hopes it will be alongside Rafael Nadal.

The 20-time Grand Slam winner announced his retirement last week and will compete in his final event at the Laver Cup, which begins on Friday at London’s O2.

And he offered up a tantalising prospect for tennis fans across the world, one last hurrah with his oldest and greatest rival, Spain’s 22-time major winner Nadal.

“Of course. No doubt,” Federer said at a packed press conference at the 02. “I mean, I think it could be quite a unique situation, if it were to happen, for as long as we battled together to having always had this respect for one another, the families, our coaching teams, we always got along really well.

"This is the right time for sure"

Roger Federer explains the reasons behind his decision to retire from tennis 👇 pic.twitter.com/JR1p4B5Onv

“For us as well to go through a career that we both have had and to come out the other side being able to have a nice relationship, I think, is maybe a great message as well to not just tennis but sports and maybe even beyond.

“For that reason I think it would be great. I don’t know if it’s going to happen, but I think it could be obviously a special moment.”

Federer will have to circumnavigate the rules of the tournament which was his brainchild, as all competitors have to play at least one singles match rather than just doubles.

Roger Federer is back on the court at the Laver Cup 🐐#LaverCup | @RogerFederer pic.twitter.com/xSekOEKG4h

Bjorn Borg and John McEnroe, the captains of Team Europe and Team World respectively, agreed to the Swiss great’s request and Matteo Berrettini, the first alternate, will take Federer’s place in the event over the weekend.

“That was my concern going in,” he added. “Of course this is an ATP event that I don’t want to mess with, but at the same time, I know my limitations.

“This is why I asked Bjorn if it was OK if I play maybe just one doubles, and I guess that one would have to be on Friday night. Then I guess Matteo would come in for me and have to play on Saturday for me.

“Bjorn said, obviously, ‘Of course, that’s totally fine’. Bjorn spoke to John, as well. They spoke to the tournament and the ATP if that was OK, and everybody said that was fine.

“So here I am trying to prepare for one last doubles. I’m nervous going in because I haven’t played in so long. I hope I can be somewhat competitive.”

Federer revealed he could have announced his retirement earlier but waited to return to London, the scene of many of his most famous triumphs, not least his eight Wimbledon titles.

“I’m happy to do it here in London, this city has been special to me. Maybe the most special place with Wimbledon down the road and here at the O2,” he said.

Roger Federer and Stefanos Tsitsipas take their first steps (and swings) back on the #LaverCup court ...

... with a little help from Bjorn Borg. pic.twitter.com/jp1a9VLsBG

“I played here and qualified for so many years and won here as well. I just thought it was very fitting. I have always enjoyed the crowds here as well.

“Also I just wanted to let the fans know I won’t be a ghost. It’s funny, I talked about Bjorn Borg just before – I don’t think he returned to Wimbledon for 25 years.

“That, in a way, hurts every tennis fan. It’s totally acceptable, his life, his reasons, you know. But I don’t think I’ll be that guy. I feel tennis has given me too much.

“I have been around the game for too long and fallen in love with too many things.”

It is held at the The O2 Arena in London from 23 until 25 September.

What TV Channel is it on?

What is the format?

Each team has a squad of six players (plus reserves). There are 12 matches played across the three days, including nine singles (three per day) and three doubles (one per day). Each match victory is worth one point on day one, two points on day two and three points on day three - and it's the first team to each 13 points that wins the tournament. All matches are played as best-of-three, with a 10-point tiebreaker if play goes to a third set

Each player is picked once or twice for singles, with at least four of the six taking part in doubles. If there's injuries, then reserve players can be used.

What are the team line-ups and captains?

What is the schedule?