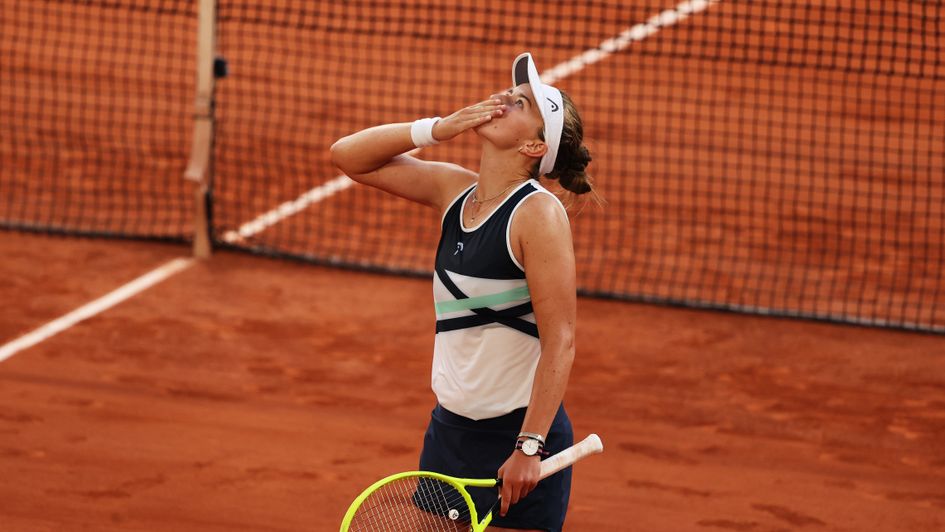 Barbora Krejcikova saved a match point in one of the French Open’s most dramatic semi-finals to beat Maria Sakkari and set up a final clash with Anastasia Pavlyuchenkova.

Czech Krejcikova becomes the fourth unseeded finalist in the last five years at Roland Garros after a 7-5 4-6 9-7 victory that lasted three hours and 18 minutes and was dripping in tension throughout.

The 25-year-old saved a match point at 3-5 in the deciding set before finally taking her fifth chance when she coolly guided a backhand winner down the line.

“I always wanted to play a match like this,” she said. “Such a challenging match where we both had our chances. We’ve both been playing so well and only one can win. Even if I lost today I would have been very proud of myself because I was fighting and I think that’s the most important thing.”

After thanking her supporters in the stands, Krejcikova also paid tribute to the influence of the late Jana Novotna, who coached her before the former Wimbledon champion’s death from cancer in 2017 aged just 49.

“Also Jana Novotna from upstairs,” said Krejcikova, choking back tears. “She was really looking after me. I really miss her and I really want to thank her. It’s really important to me to say this out loud.”

The rallies were so tense at times in the third set that both seemed barely able to hit the ball but Krejcikova is the less emotional, more solid player, and in the end that proved the difference.

Sakkari saved three match points at 6-7, and the drama then hit new heights when Krejcikova thought she had taken her fourth chance two games later only for the umpire to decide Sakkari’s shot had clipped the line – a decision contradicted by HawkEye, which is used by TV companies but not the tournament.

In comparison, Pavlyuchenkova’s 7-5 6-3 victory over Tamara Zidansek was almost routine.

By reaching her first grand slam final in her 52nd tournament, the 29-year-old Russian set a new record.

Pavlyuchenkova was the world junior number one aged just 14 and now, 15 years later, she will play for a first slam title on the Parisian clay.

She had fallen six times in slam quarter-finals over 10 years before beating Elena Rybakina on Tuesday but she needed just one attempt at a semi-final.

Asked what that 14-year-old girl would have said about the way her career has panned out, Pavlyuchenkova said with a smile: “What took you so long? It’s been a long road. I had my own long special road. I’m just happy I’m in the final. Trying to enjoy it. Trying to do better.

“I think about it all the time. I’ve been thinking about it since I was a little kid, since I started playing tennis. That’s what you play for. It’s been there in my head forever.

“I definitely didn’t expect this year being in the final. I guess you can’t expect those things. I was just there working hard, doing everything possible.

“I just said to myself, ‘You know what, this year let’s do whatever it takes, anything you can do to improve your game, your mentality’. Started working with a sports psychologist, everything. I just I wanted to give it a try so I have no regrets.”

Zidansek was the outsider of a hugely unexpected final four, none of whom had ever stood on this stage at a slam before.

The Slovenian fought back from 3-5 in the opening set but double-faulted on set point and Pavlyuchenkova, the first Russian to reach the final in Paris since Maria Sharapova in 2014, always kept her nose in front in the second.