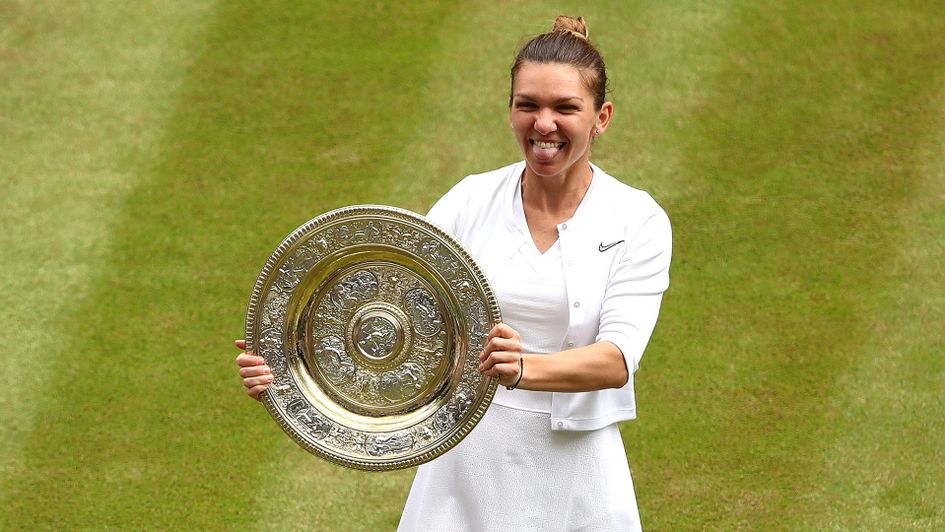 Simona Halep with the Wimbledon trophy

Simona Halep produced a superb display in her first Wimbledon final to storm to the title and keep Serena Williams waiting again for number 24.

The 27-year-old's 6-2 6-2 victory makes her the first Romanian to win a singles title at the All England Club and added to the French Open crown she claimed last summer.

This is the third time since Williams' return last spring from the birth of her daughter that she has been one victory away from finally equalling Margaret Court's all-time record for slam singles titles.

But, as she had against Angelique Kerber here 12 months ago and Naomi Osaka in New York, Williams once again fell short, seemingly unable to put thoughts of history out of her mind.

Enormous credit, though, must go to Halep, who showed herself to be not just one of tennis' great defenders, chasing down everything Williams could throw at her, but also a strong attacking force.

The Duchesses of Cambridge and Sussex had front row seats in the Royal Box, the latter desperately hoping to see her close friend Williams have her moment.

But it was Halep's day, the Romanian needing just 56 minutes to race to victory, dropping to her knees when Williams' final forehand hit the net.

🎾🏆 The moment Simona Halep is confirmed as #Wimbledon champion for the first time!

What a performance by Simona Halep! 🙌

Her first Wimbledon title, which, of course, means her name on the famous wall of champions at SW19 👇 #Wimbledon #LadiesFinalpic.twitter.com/k4IWwsoIqF

Halep had beaten Williams just once in 10 previous meetings, at the WTA Finals five years ago, but finally ending her grand slam drought in her fourth final had changed her mentality.

She has found her grass-court legs this tournament having previously struggled to adapt to the surface and played a superb match against Elina Svitolina in the semi-finals, losing only four games.

That was one more than Williams in her clash with Barbora Strycova but Halep was a step up from her previous opponents, and she showed that immediately.

Williams' serve sets her apart from the rest of the women's game but Halep had a read on it from the first point and she took advantage of a tight start from the American to break in the opening game.

One of the big questions was always going to be how heavily history would weigh on Williams' shoulders, and she looked like she had lead in her right arm and her feet. 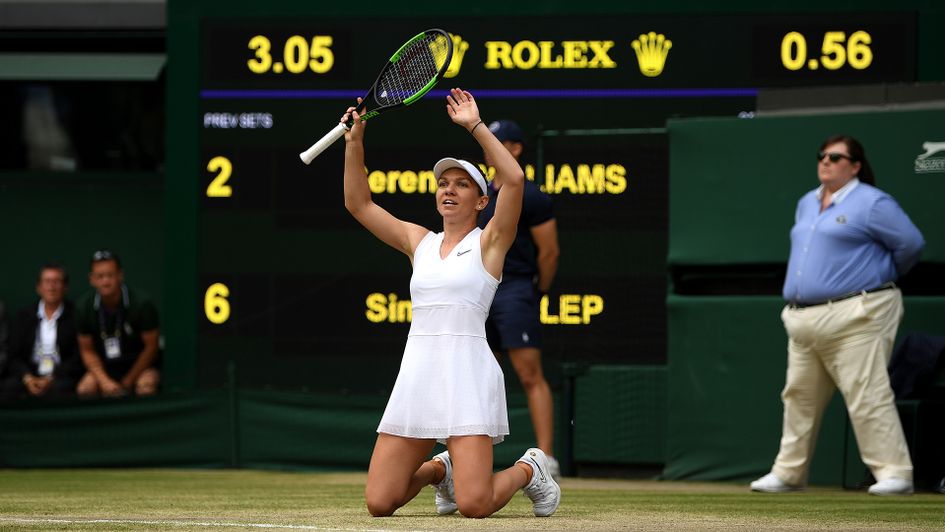 Halep, by contrast, was right at home in a Wimbledon final, and she brought the crowd to their feet with a running forehand winner to bring up more break points in Williams' next service game, taking the first with a backhand down the line.

It seemed scarcely believable when she served the first ace of the match to make it 4-0.

Williams knew she needed to loosen up and quickly, and she stopped the rot with a service hold, striking the ball with much greater fluidity.

Halep would not yield, though, absorbing Williams' power and sending it back with interest, first with a backhand pass that had her opponent applauding and then a forehand hooked from one corner to the other.

"Serena, wake up" came a shout from the crowd, but every time she thought she had hit a winner, back it came, and Halep wrapped up the opening set in just 26 minutes.

Williams had talked in the build-up about needing to tread the fine line between ice and fire, and the guttural roar she let out after winning the second point of the second set showed she was leaning towards the latter.

Another fierce grunt accompanied a 123mph serve into the net, but Halep was not about to be intimidated now she had come this far.

Williams has not won a grand slam final after losing the first set since 2005 so the size of the task was clear, but she was not up to it, Halep breaking serve again for 3-2 and never looking like faltering.