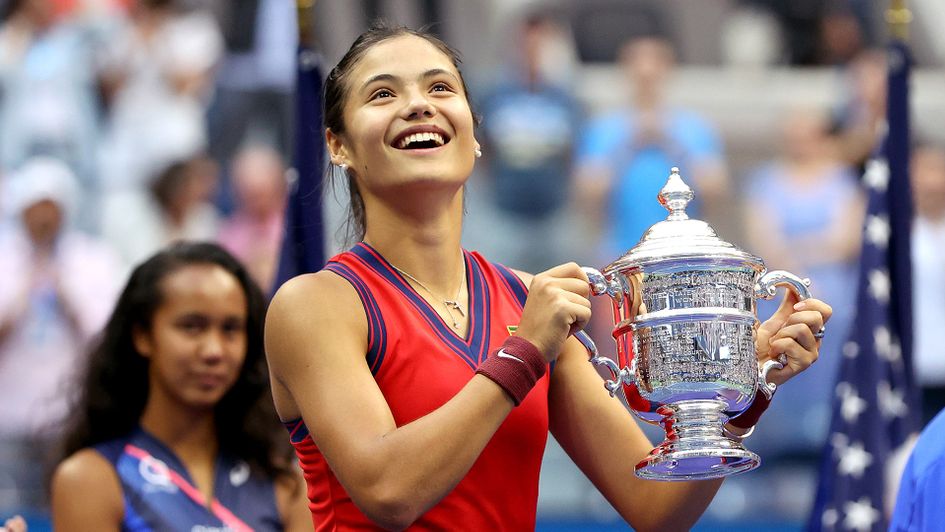 Emma Raducanu celebrates in the US Open ginal

Emma Raducanu's astonishing fairytale of New York is complete as she won the US Open to become Britain's first female Grand Slam champion since Virginia Wade won Wimbledon in 1977.

The first qualifier ever - male or female - to reach a major final defeated Leylah Fernandez 6-4 6-3 on the Arthur Ashe Stadium in the first all-teenage final this Millennium as she followed in the footsteps of Virginia Wade, who was also the last British woman to win this event back in 1968.

Two months on from her impressive Wimbledon debut ending in emotional circumstances due to breathing difficulties in the second set of a fourth-round match with Ajla Tomljanovic - before taking farcical stick from the likes of Piers Morgan and John McEnroe - the history-making 18-year-old is now the first player to win a Grand Slam at just the second attempt.

Her winners' cheque of £1.8million takes her career earnings to a whopping £2.1m and she now moves up to 21 in the rankings having been 361 before Wimbledon and 150 ahead of her trip to Flushing Meadows.

All this just a month after achieving an A* in maths and an A in economics in her A-levels.

THE FIRST BRITISH WOMAN TO WIN A GRAND SLAM SINCE 1977! 👏🇬🇧 pic.twitter.com/LXagq9Lcpr

The fewest number of Grand Slams it previously took any other woman to win one was four - Monica Seles (1990 French Open) and Bianca Andreescu (2019 US Open) - while only Pam Shriver had managed to reach a final as early as the second in 1978.

Perhaps even more remarkably, she did all this without dropping a set in the entire tournament - the first to do it at the US Open since Serena Williams in 2014. The American dropped 32 games in that campaign and Raducanu conceded just 34.

On top of all this, Raducanu is the youngest Grand Slam champion since Maria Sharapova triumphed at Wimbledon in 2004 aged 17 and the youngest British winner in the Open Era.

🤯 Two months after her debut Wimbledon, Emma Raducanu’s has won her first Grand Slam sooner than anyone in history.

👏🤩 Just look at these names in comparison… #USOpen pic.twitter.com/BtR6SwPBVy

The Bromley teenager is now the clear bookies favourite at 1/10 to win the BBC Sports Personality of the Year award which is incredible when you think a few months ago, the British publish wouldn't have even known who she was.

Raducanu made the better start in the first Grand Slam final between two unseeded players, confidently holding serve in the opening game and then taking her sixth opportunity to break for 2-0, but the standard between her and 19-year-old opponent Fernandez belied their age and experience.

𝗧𝗛𝗜𝗦 is how to show the world what you're about early in a Grand Slam final! @EmmaRaducanu 👏

Fernandez shook off any early nerves to hit straight back, the two young women showing immediately why they had conquered all before them in New York.

😲💪 These are the sort of legends who can win a Grand Slam without dropping a set.

🤯 But none of them did it in their 2nd at the age of 18! The last to do it at the #USOpen was Serena Williams in 2014 when she dropped 32 games. Emma Raducanu dropped just 34. pic.twitter.com/Qm3Ld2iCgJ

Every rally was hard fought, neither woman shirking an opportunity to strike the first blow but reading each other’s games in a way none of their previous opponents had managed.

Brilliant returning from Raducanu – probably the shot of the tournament – brought up two set points in the 10th game.

Fernandez saved both, and a third, but on her fourth opportunity the British teenager drilled a forehand down the line to take it 6-4.

🙌 HISTORY IS MADE 🇬🇧

🤩 It’s Emma Raducanu's #USOpen as she becomes the first British female to win a Grand Slam since 1977!

🤯 And no player in history has won their maiden title at just the second attempt!

Raducanu again threatened to break for a 2-0 lead in the second set, only for Fernandez to put her disappointment behind her and save three break points.

The Canadian then broke serve herself to lead 2-1 but back came Raducanu with what proved the decisive break of the match.

Just when you think you've seen it all from @EmmaRaducanu, she does this.

A run of four straight games took her to the brink of victory but Fernandez was not finished, saving two match points to force Raducanu to try to serve it out.

To add to the tension, the British player was forced to take an injury timeout after grazing her leg sliding to the ball, much to the annoyance of Fernandez.

Raducanu saved the break point, and another, before bringing up her third match point. And this time she took it – with an ace, sealing a phenomenal 6-4 6-3 victory in an hour and 51 minutes.

Raducanu smiled a wide grin as she was announced as the champion to loud cheers from the crowd. She said: "First of all I really want to congratulate Leylah and her team on an incredible fortnight.

"She played some incredible tennis and has beaten some of the best players in the world. It was an incredibly difficult match but I thought the level was extremely high and I hope we play each other in many more tournaments and hopefully finals.

"As for the three weeks I’ve spent in New York I would say having such a supportive team as I have over there – my coach, Will (Herbert) the physio, my agent, the LTA, everybody in that team and everybody at home who isn’t here but watching on TV, thank you so much for all your support over the years.

"Most of all I would say thank you to everyone here, New York, thank you all for making me feel so at home from my first qualifying match all the way to the final.

The first ever qualifier to win a Grand Slam 🏆

"I love playing in front of you and you’ve really spurred me on in some very difficult moments and I hope that me and Leylah put on a good performance today.”

Talking about the final moments of the match, Raducanu said: "Leylah’s always going to play great tennis and always going to fight, that’s just the competitor she is and that’s why she’s here in the final.

"I knew that I’d have to dig deep. I fell, somehow, and I thought that would throw myself off balance because I was going to serve. I was just praying not for a double fault but we got through it and I think just staying in the moment, focusing on what I had to do and my process and the mindset just really helped.

👩‍🎓 August: Gets A* in maths and A in economics

🏆 September: Wins historic #USOpen, earns £1.8m and climbs to 21 in the rankings

"I think it shows the future of women’s tennis and just the depth of the game right now is so great. I think every single player has a shot of winning any tournament. I hope that the next generation can follow in the steps of some of the greatest legends, for example Billie Jean (King) right here, and everyone who’s at the top of the game right now."

Wade applauded Raducanu with a smile to match the teenager’s, while Tim Henman, working for TV courtside, struggled to control his emotions.

“It means so much to have Virginia here and also Tim,” said Raducanu before receiving the trophy from King.

“Just to have such British legends and icons for me to follow in their footsteps, it definitely helps and gave me the belief that I could actually do it.”

Fernandez fought back tears on the podium but could reflect on a superb tournament. She said: “It’s incredible. I honestly have no idea what to say. Today’s going to be hard to recuperate but Emma played amazing so I congratulate Emma and your team. I’m very proud of myself and the way I played these last two weeks and especially having the crowd. Thank you so much New York.”

Fernandez also marked the anniversary of the September 11 attacks, saying: “I know on this day it was especially hard for New York and everyone around the United States. I just want to say that I hope I can be as strong and resilient as New York has been the past 20 years.”

Routes to the US Open final

Raducanu’s ambitions on her US Open debut centred around getting through qualifying, which she did without losing a set. Since then, the 18-year-old has steam-rollered her way through the draw, losing just 27 games in six matches. Her victims have included Olympic gold medallist Belinda Bencic and 17th seed Sakkari. Raducanu has appeared shocked and delighted throughout before completing her crowning moment in straight sets yet again.

Fernandez has undoubtedly had a tougher draw, making her first big splash by upsetting defending champion Naomi Osaka in round three. She followed that up by knocking out another former winner in Angelique Kerber, fifth seed Elina Svitolina and second seed Aryna Sabalenka, all in tough three-set contests. She has spent more time on court than Raducanu despite playing three fewer matches but her belief has been evident throughout, with Fernandez saying after beating Kerber that she was not surprised by her achievements.