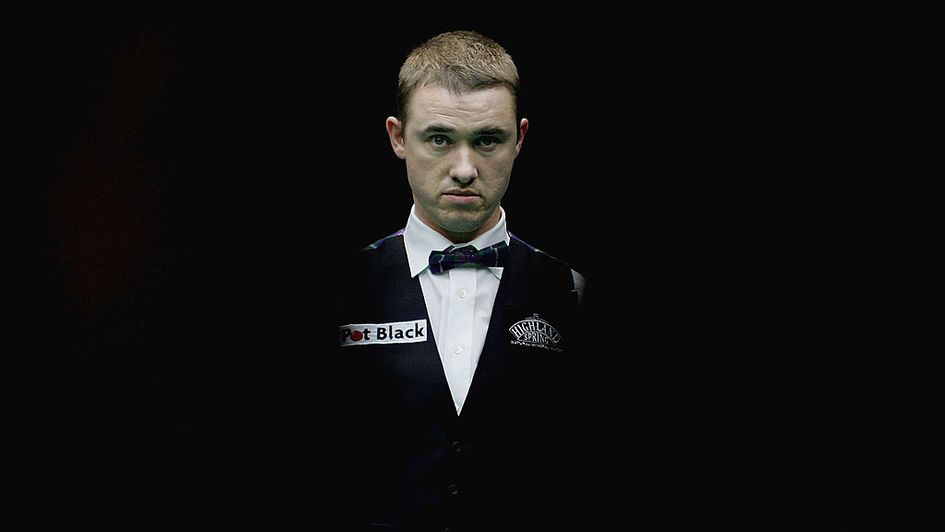 Stephen Hendry snooker comeback at Gibraltar Open should be cherished

Stephen Hendry was and will always be a snooker phenomenon.

Supremely talented, ferociously ambitious, the Scot was determined to reach the top from a very young age, and it didn't take him long to get there.

Hendry's surprise return to the sport at the Gibraltar Open, nine years after his retirement, will bring memories flooding back for fans everywhere.

In some ways, it's probably that aspect of his comeback that is the most pleasing, as I tend to think Hendry's achievements and the sheer scale of his domination can often be forgotten.

Think how much talk there always is about Ronnie O'Sullivan, John Higgins and Mark Williams. The celebrated Class of 92. That's fair enough too, they're still at the top of snooker now after three decades as professionals. 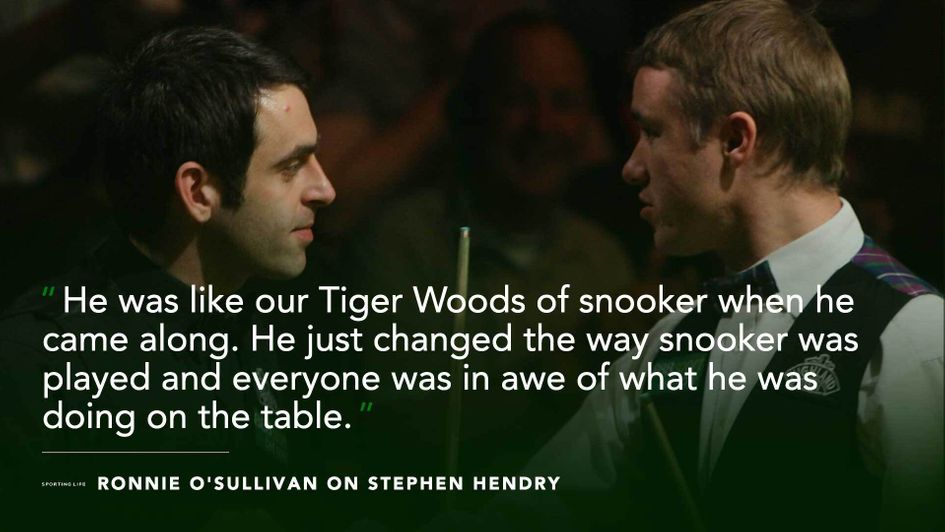 It's the same to a lesser extent with Steve Davis. Perhaps because his success predominantly came in the eighties, when snooker was basically like rock and roll in Britain. Also, Davis carried on playing on for so long, until he was approaching his sixtieth year.

In relative terms, the Hendry snooker story is a shorter affair. He retired back in 2012. And his total ascendancy in the sport maybe lasted a dozen years at most. Just to clarify, that's not an attempt to downgrade his career at all, because when he did rule the sport, it was profound.

Hendry had that focus about him even as a boy. You could see it when he appeared on the BBC's Junior Pot Black in 1983 at the age of 14.

Hendry turned professional in 1985 and within two years had won his first ranking event, the 1987 Grand Prix. Victory over Davis in the 1989 UK Championship final gave us the clearest of indications that a changing of the guard was on the cards.

Then came the nineties. It was, for Hendry, an astonishing decade. Sports fans had become well used to a diet of Davis success in the eighties. Amazingly, Hendry took total control of the sport a step further still.

There were times during the nineties when Hendry seemed genuinely unbeatable. Six world titles in seven years. Five UK crowns, including a hat-trick. Six Masters triumphs, with five of them in a row. 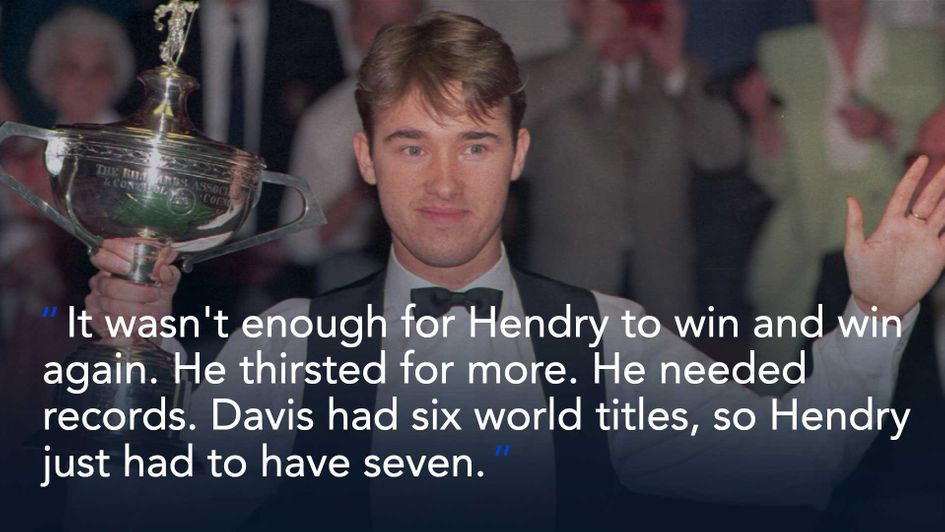 Stephen Hendry is preparing for his return

There were plenty of superb players around then. Eighties stars like Davis and Taylor were still capable of going deep in tournaments. John Parrott was good enough to land the world and UK titles. Jimmy White was in his pomp. That famous aforementioned 1992 trio were just starting out. But honestly, you wouldn't know it at times. This was the Hendry show and the rest of the top players were like a supporting cast.

Hendry was a breathtakingly attacking player. Safety was never remotely a priority for him. Winning a frame in one visit was the order of the day. So was smashing into the reds and creating more chances. Not just off the black either, but the blue as well. Do or die shots were rarely refused. It all made for a fearsome concoction that became so hard for any of his rivals to stop.

At the Crucible, it was the Hendry against White show for half a decade. Naturally, most of the public were desperate for White glory. As we all know, the British people have always had a curious relationship with winners.

The cheering for White never affected Hendry in the slightest. It only spurred him on more. He comfortably beat the Londoner in the 1990 and 1993 finals. In 1992, we witnessed an epic, with Hendry winning ten frames in a row from 14-8 down to win 18-14. Then, in 1994, came a first deciding frame in Sheffield since the infamous black ball finish between Davis and Taylor. Hendry won it, naturally. Four times king of the world. 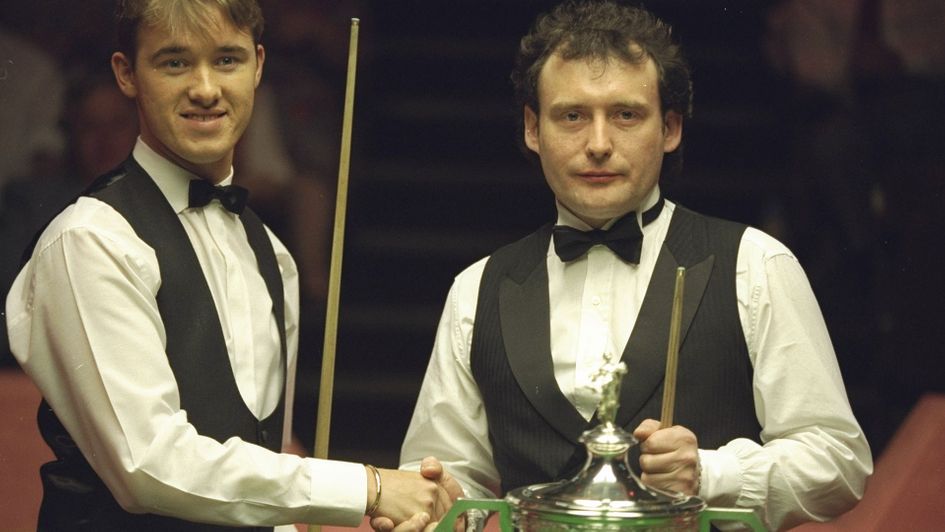 It wasn't enough for Hendry to win and win again. He thirsted for more. He needed records. Davis had six world titles, so Hendry just had to have seven. He soon moved to six with world titles in 1995 and 1996, beating Nigel Bond and Peter Ebdon respectively in finals. It was relentless, remorseless excellence.

Hendry suffered a rare Crucible blow in 1997, losing to Ken Doherty in the final. He was then beaten in the first round by White in 1998. This only delayed the inevitable. Hendry saw off Williams to claim a seventh world crown in 1999. By that time, everyone was in agreement that this was the greatest ever player. Some still believe that to be the case today. Either way, he's no lower than No.2 behind O'Sullivan in anyone's league table.

The public may not have taken Hendry into its heart, but they always respected this outstanding champion. It's incredible to think now that Hendry was still only 30 when he won his seventh world title. To put that in some context, O'Sullivan's sixth Crucible success last year came at the age of 44.

Slowly but surely over the next decade the story was one of gradual decline for Hendry. I don't think that should be overplayed though. He still reached another world final, losing to Ebdon in a decider in 2002. He continued to win ranking events, the last of them being the Malta Cup in 2005.

Even in 2012, he was hardly languishing at a desperately low level. He had just made a 147 at the Crucible. He reached the last eight of the World Championship, comfortably beating Stuart Bingham and Higgins in the process. But this was a man who just hated losing, and defeats had become commonplace.

It was a genuine shock when Hendry announced his retirement in Sheffield that spring. He was still relatively young in snooker terms at 43. It truly was the end of a special era. 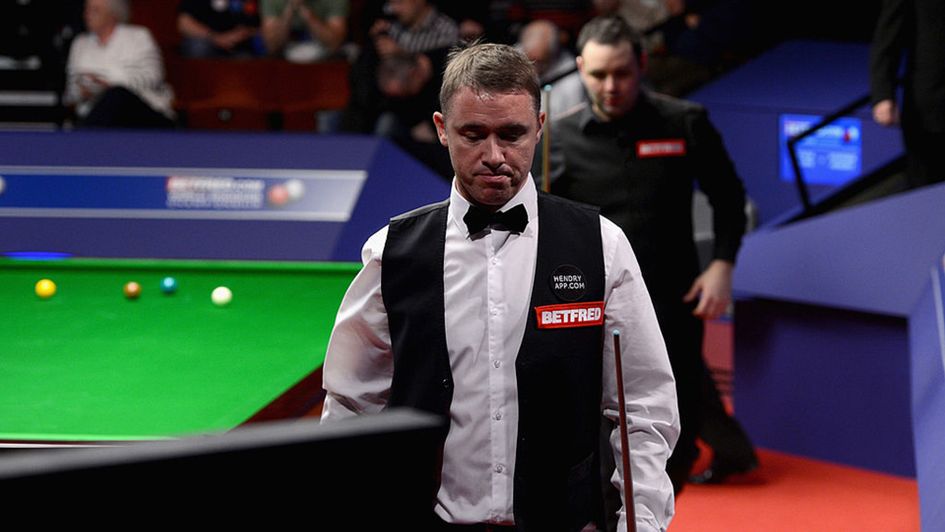 Stephen Hendry during his last match as a professional in 2012

It quickly became apparent that Hendry didn't regret the decision. He built a satisfying life away from the table. He became an erudite television pundit. By all accounts, from those who watched him in the rare times he played, his abilities had continued to decline.

There clearly must have been some kind of itch still to be scratched though. Maybe it was watching how long O'Sullivan, Higgins and Williams were going on, still winning big.

I remember very clearly watching the World Seniors Championship last year. It was pleasant enough company, those familiar images from the baize flickering away in the corner of the living room.

But then something happened that made me sit up and really take notice. Hendry was playing well. He looked genuinely good when in the balls. There was even a hint of the strut that was so familiar in the glory years.

Soon after came the news that surprised the sporting world. Hendry announced he was coming out of retirement. The power of his name was there for all to see, his face adorning the back pages of newspapers everywhere.

Fans genuinely welcomed the news. Snooker is in a good place right now. Maybe even in rude health. It doesn't necessarily need unlikely sub-plots or cameos. This didn't feel like one of those things. It was deeper than that somehow. We had another chance to see a genuine great in a proper competition again. 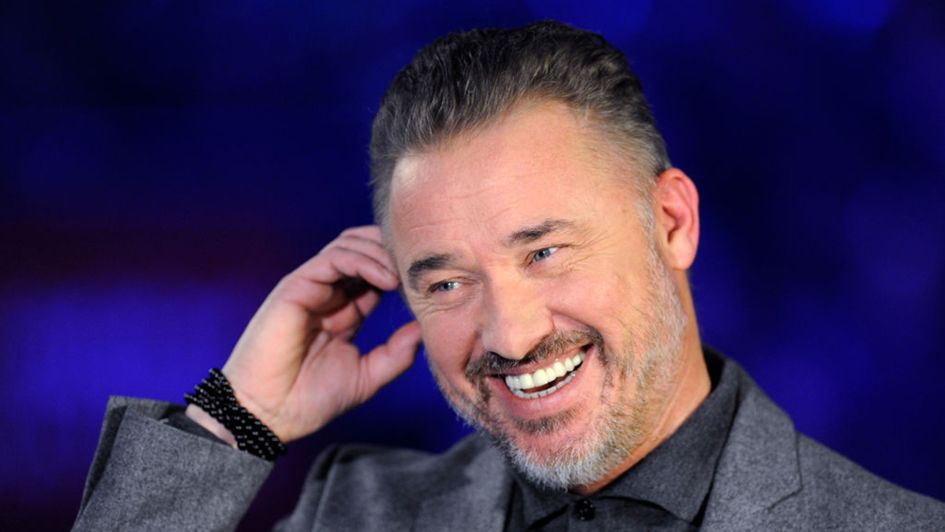 It's not entirely clear why we've waited six months for the actual comeback to start, as it finally will when the 52-year-old takes on Matthew Selt in Milton Keynes on Tuesday night. Perhaps it's just the Hendry perfectionism at play again.

I'm convinced snooker people don't have particularly high expectations of Hendry. The prospect of him actually winning anything couldn't be further from our thoughts. But that probably matters not a jot to Hendry. He has his own standards and they remain higher than we can understand. He certainly won't want to embarrass himself and that prospect must lurk somewhere in his mind.

There has been talk that if Hendry really struggles, it could affect his legacy. To be honest, I doubt that. Whatever happens now, with Hendry in his fifties, is it really going to undo decades of wonderful play and stellar achievements? I can't see it.

Shall we just enjoy this then? That's certainly what I intend to do. We like the "rolling back the years" cliche in sports journalism, but it really will be totally appropriate in this case.

We won't just see Hendry at 52, not those of us old enough to remember a good deal of snooker's glorious past. We'll have that precocious teenager in our minds. The Hendry of his twenties that ruled the world. The more mature man in his thirties that surpassed Davis and established himself as, at that time, the finest ever.

Past meets present, and maybe even a little bit of future. It's good to see you, Stephen. Play well.

A new episode of Talking Snooker here for you, as we reflect on a stunning success for John Higgins at the Players Championship. We also look ahead to Stephen Hendry's comeback and talk about the prospect of fans at the Crucible.https://t.co/3bLU6zEv6R#TalkingSnooker