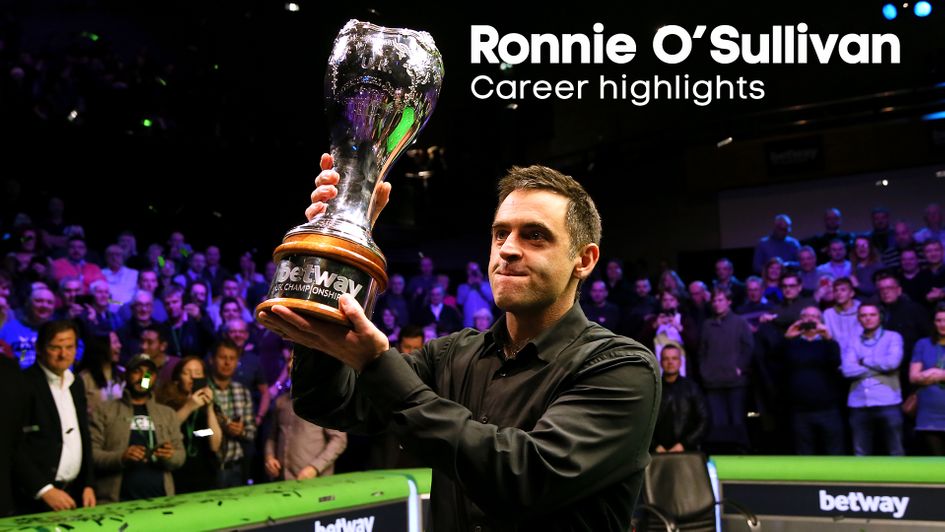 After Ronnie O'Sullivan became world champion for a sixth time, we look back on The Rocket's significant career moments and most memorable breaks.

The whispers about a young player by the name of Ronnie O'Sullivan had grown to something close to a drumming procession by the time the fresh-faced 17-year-old reached the final of the UK Championship in 1993. Standing in his way of a first ranking title was Stephen Hendry, the world number one and undisputed king of the green baize. It mattered not as O'Sullivan blew Hendry away with a brilliant and breathtaking display that saw him prevail 10-6. It was to prove a sign of things to come as for all Hendry enjoyed his fair share of moments against O'Sullivan in the subsequent years, the young prince would soon be king, the UK Championship made very much his own. 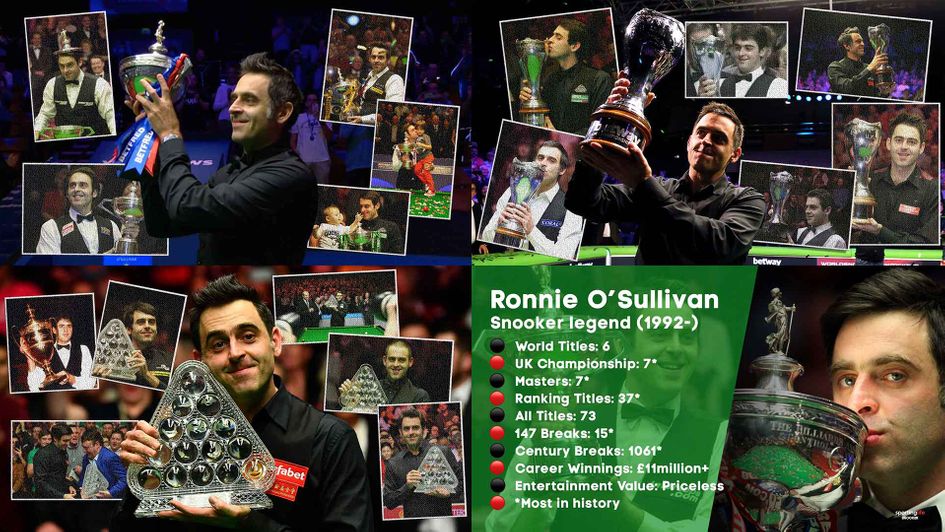 The most memorable break O'Sullivan, or any snooker player for that matter, has ever compiled. Five minutes and 20 seconds of rare genius and unforgettable entertainment. O'Sullivan raced around the table without a care in the world and when the spilt into the reds from the black on 49 parted the pack like the red sea, it was on. There were very few alarms thereafter, only O'Sullivan's nerves could stop him now and he held himself together beautifully, sinking the final black before embracing the euphoric applause from a delirious Crucible faithful. The chalk was thrown into the crowd as players from both tables offered their congratulations and the sight of O'Sullivan gesturing for a replacement chalk to be brought out is a picture that will live long in the memory.

By the spring of 2001, O'Sullivan had just about everything; the adulation of his beloved fans, a host of major titles, wealth and the utmost respect from his peers. The demons he had battled in his early career were seemingly in the past but still evading him was that maiden World Championship title. In 2001 his game finally came together in Sheffield and following a relentless run to the final, old rival and 1998 winner John Higgins was the final hurdle to be negotiated. As happened so many times before and after, the pair delivered a high-class and hard-fought final but there was no stopping O'Sullivan who would go on to win 18-14. The World Championship crown was finally his.

O'Sullivan's 500th competitive century, one that came at Glades Arena in Kidderminster of all places. It was an unusual start to the break, too, O’Sullivan getting under way with double to the middle pocket before beautifully opening up the reds from the black only a few shots later. It was typical O'Sullivan thereafter, the white seemingly on a string as he potted all bar the final black in effortless fashion.

A victory that O'Sullivan proclaimed as one of his greatest achievements having defeated defending champion Mark Selby 10-8 in an emotionally-charged final. Selby's rise to the summit of the game had brought in a new era in snooker, one where the likes of O'Sullivan and Higgins had a new heir to the throne snapping hard at their heels. O'Sullivan's rivalry with Selby became fierce over this period but what made this victory even more memorable was the fact that O'Sullivan arrived at the tournament with a new cue, one which he struggled to build a relationship with all week. Despite this, O'Sullivan appeared to relish the challenge that this handicap presented and his ability to win the event in the face of such adversity was something that clearly made him very proud. He gave the cue away moments after lifting the trophy.

Just another example of O'Sullivan's rare genius. It started with a long red to the yellow pocket and finished with a thumped black off the spot, the intervening eight minutes a flawless exhibition of break building that is as close to snooker perfection as we may ever see. The reds were opened from the blue with only the second shot of the break but with the pink tied up on the side cushion, O'Sullivan was forced to manoeuvre the white ball up and down the table with regularity as he feasted on a mix of blacks, blues and baulk colours. All the while, the white ball never once strayed out of position before O'Sullivan sunk the troublesome final pink to the green pocket with a look of contempt. O'Sullivan, and snooker, at its best.

A year on from winning his fourth World Championship in 2012, O'Sullivan returned 12 months later to defend his title on the back of only one competitive match all season - in September - having taken some time away from the game. Many doubted whether even the great O'Sullivan could pull off one of the greatest sporting comebacks of all time but he dominated from his very first match, not losing a single session throughout the tournament before making six centuries as he beat Barry Hawkins 18-12 in the final. It was snooker from the gods, passing Hendry's record of 127 career Crucible centuries in the process and once again reminding everyone who was king. 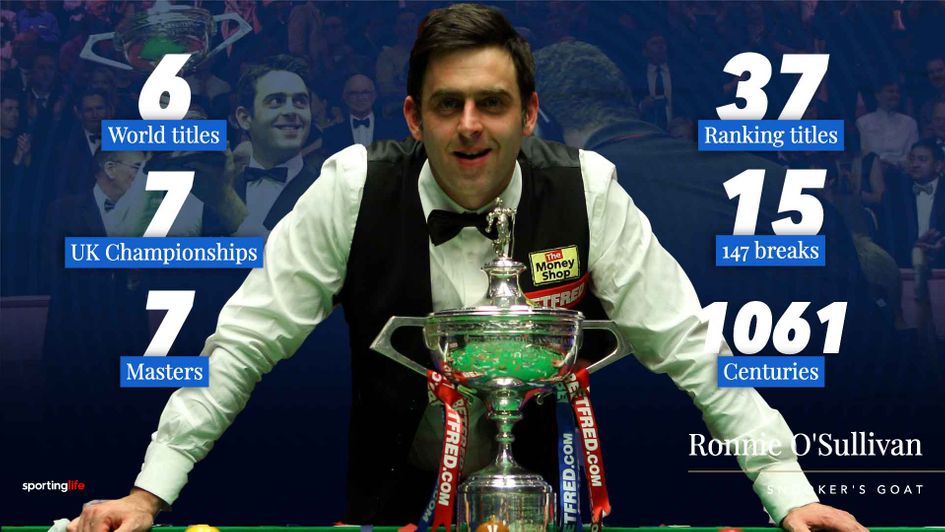 With O'Sullivan now back on the tour full-time, winning titles was his priority again but a young Chinese sensation named Ding Junhui was now making waves on the table and they would meet in the final of the Welsh Open in 2014. As it turned out, it proved to be another another demonstration of O'Sullivan's dominance in the sport and the The Rocket finished the match in style. What was his 12th maximum at the time might have been his most difficult to complete, a host of obstacles needed to be overcome, not least the 15th and final red that was hugging the side cushion and needed to be potted left-handed and with deep screw to get back down for the black. The green played with the rest from the close to the blue spot was another brilliant pot, as was blue to pink, and O'Sullivan even allowed himself a little smile while some in audience could be seen praying. Commentator Willie Thorne called the break wonderfully, urging O'Sullivan on with genuine affection and great humour. A fabulous break, one of the best.

Only O'Sullivan would have nerve or skill to make a 146 break by design, purposefully playing for the pink after potting 14 reds in protest at the £10,000 prize money on offer for making a maximum break. O'Sullivan later called the prize "too cheap" and it wouldn't be the first time he would be at loggerheads with snooker chief Barry Hearn. 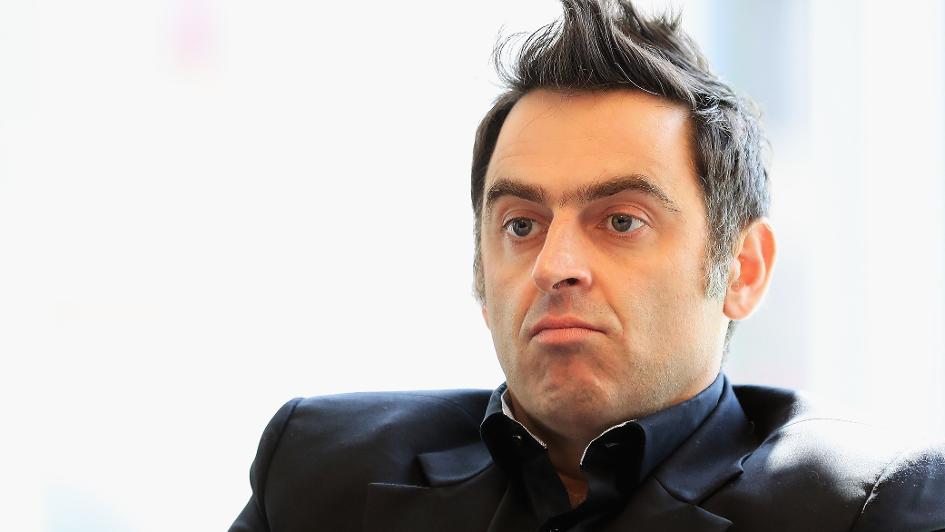 An early season campaign seemingly tailored around lifting a record seventh UK title and record 19th Triple Crown event and O'Sullivan didn't disappoint, overcoming an early scare against Ken Doherty in round two before making seamless progress to the final. Mark Allen stood in his way but The Rocket was not to be denied, producing a near faultless display to win 10-6 and prove without question that he is the greatest player ever to have graced the sport of snooker. 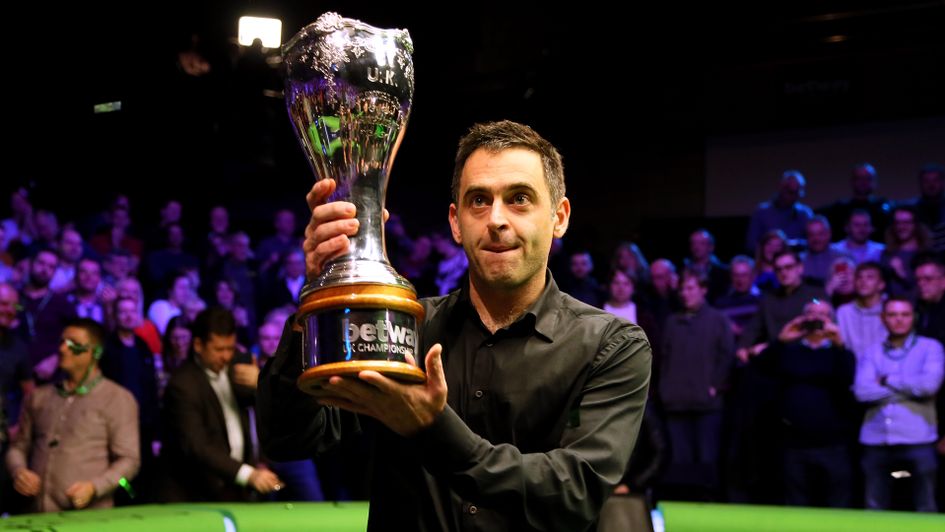 And then there is the 1000th century, one completed to raucous, adoring applause from the crowds in Preston as O'Sullivan completed a 10-4 victory over Robertson - who played excellent snooker throughout the final. The break itself was straightforward enough, the balls set fair. The beauty of it was in the fact that O'Sullivan chose to make it, in the final frame, rather than take an opportunity in either of the previous two. Rock n roll folklore says that Kurt Cobain wrote Smells Like Teen Spirit in a matter of minutes at the breakfast table, having told those who'd listen that he was going to write the greatest rock song there ever had been. Transcendental genius can choose the time and the place, and that's exactly what Ronnie did here, mischievously, on ITV4. There simply has never been anyone quite like him.

For significance, and context, becoming world champion again in 2020 might well be Ronnie O'Sullivan's greatest ever achievement. This latest victory in Sheffield is his sixth in snooker's blue-riband event, drawing him level with Steve Davis and Ray Reardon, and leaving him only one behind former rival Stephen Hendry. Furthermore, it now takes O'Sullivan onto a record 37 ranking tournament wins, 20 of those coming in Triple Crown events. Another record after he broke the previous one when winning the UK Championship in York in 2018. Nevertheless, what he has achieved in the last 17 days is probably better judged, not just by the numbers, but by the context in which this performance came. O'Sullivan's recent record in the World Championship has been modest for a player of his standing and it is worth remembering that he was dumped out of the event by qualifier James Cahill in the first round last year. He has subsequently branded the event an 'ordeal' while reaching the final of the Northern Ireland Open in November is the closest he has come to winning a ranking event this season. Such has been his struggle for form, O'Sullivan this year failed to qualify for the valuable Coral Series - a series he won in 2019 - and he returned to Sheffield expressing his concern about even playing in the championship due to the ongoing coronavirus pandemic. Furthermore, he has spent much of the tournament bemoaning his lack of form before then producing memorable comebacks against Mark Williams and Mark Selby - O'Sullivan winning three frames on the bounce to edge out the latter in a dramatic deciding frame of their epic semi-final. And yet, here we are: Ronnie O'Sullivan is champion of the world again. It is barely believable, but most things O'Sullivan has done on a snooker table defy belief.

🏆 Ronnie O'Sullivan is champion of the world for a sixth time.

🚀 So typical of the Rocket to finish the match in style.pic.twitter.com/9sImzQYmWv