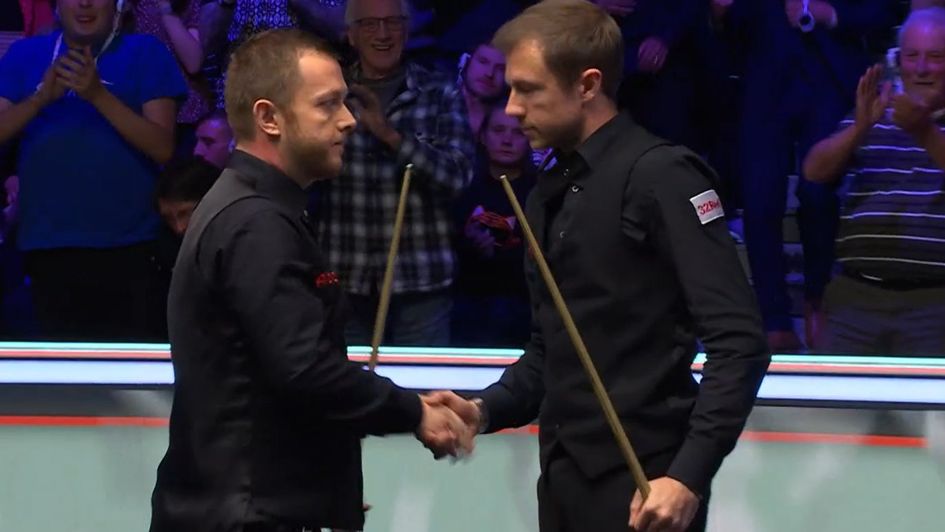 Mark Allen just got the better of Jack Lisowski (Eurosport)

Mark Allen showed all of his customary grit to haul himself to a 6-5 victory over Jack Lisowski and reach the UK Championship final.

Allen, who lost almost five stone in weight during summer and has been one of the form players of the season since it began, looked to be in major trouble at 5-3 down, only to reel off three in a row and escape from it.

Lisowski had his chances in the decider and was unfortunate to narrowly miss a canon which would've released the final red, his impressive half-century break coming to an end as a safety battle ensured.

Allen rode his luck as Lisowski missed a vital green but took the colours well when his chance did arrive, potting a nerveless black to seal victory and breathe a huge sigh of relief.

Lisowski will feel it was a huge opportunity missed having been one of the stars of the week, thrashing Shaun Murphy in the quarter-finals but never quite finding top gear on Saturday night.

Allen on the other hand may feel like he's still to find his and the outcome of Sunday's final against Ding Junhui may depend on whether he can do so having been taken the distance here.

"Just relieved to finally finish that match," said Allen. "Just fought really hard for everything, never gave up, tried to stay as positive as possible given just how bad I was cueing.

"I found some form from 5-3, made a couple of breaks to go 5-5. I was trying to just box clever from there. It was just a matter of who could hold their nerve better at the end."

Allen confessed that Lisowski had been the better player for the most part as his wait for a ranking title continues.

"I think I made a really good break to get back into it. Dunno, was just rubbish at the end I guess," said a shellshocked and visibly disappointed Lisowski. "Just wasn't good enough today, hats off to Mark, he played better at the end. Back to the drawing board.

"I'm knocking on the door, just got to keep my head up. You can't give up. I'm learning. I'm a slow learner, but I'm learning, and I'll come back again next year and have a pop at this tournament."

Ding earlier overcame a stirring fightback from Tom Ford to win 6-3 and reach the final of the event for a fourth time.

Ding looked like he'd storm into Sunday's title decider when he took the opening five frames of the match, a day after he'd dished out a 6-0 thrashing of tournament favourite Ronnie O'Sullivan.

Ford kept fighting though and pounced when Ding missed a straightforward pink just as he seemed set to complete a 5-2 win, the Leicester man then making it three in a row to really pile on the pressure.

When Ford got back among the balls in frame nine it appeared as though he'd close the gap further still, potting eight reds and eight blacks only to miss the simplest of reds with thoughts perhaps turning to a potential maximum break.

That allowed Ding the opportunity to land a counterpunch and finally end the contest and while it took him two attempts, when a tricky yellow found the middle pocket he could at last relax, clearing the remainder of the colours to deservedly win.

"It feels great," said Ding. "(The last) three seasons have not been any good. All week I've been playing good, and I'm feeling well at the moment. I'm looking forward to tomorrow."

It was put to Ding that at one stage he'd won 23 of his last 25 frames, to which he replied: "I must be playing very well!"

Ford felt frustrated that he hadn't produced, particularly early on.

"I couldn't get going," he admitted. "I just kept on losing the white ball and falling out of position. It's frustrating because all week I've felt terrible and managed to get through matches. Going into that match I felt good. It's the best I've felt and the worst I've played.

"When I looked round and saw him slumped in his chair, I'm thinking 'well hang on a minute, if I can get a couple back here, it looks like it's getting to him a little bit'. The only trouble is I was struggling so much.

"I made 64 in that last frame and was on a maximum so had that on my mind, and I just took my eye off the pot. It was such an easy red, and I just didn't even concentrate on it. It shows in this game: if you don't concentrate, you get beat.

"I've had a good week. If someone had said I'd get to the semis before I got here, I'd have snapped their arm off. Overall, I've had a great week and hopefully I can go on from there."