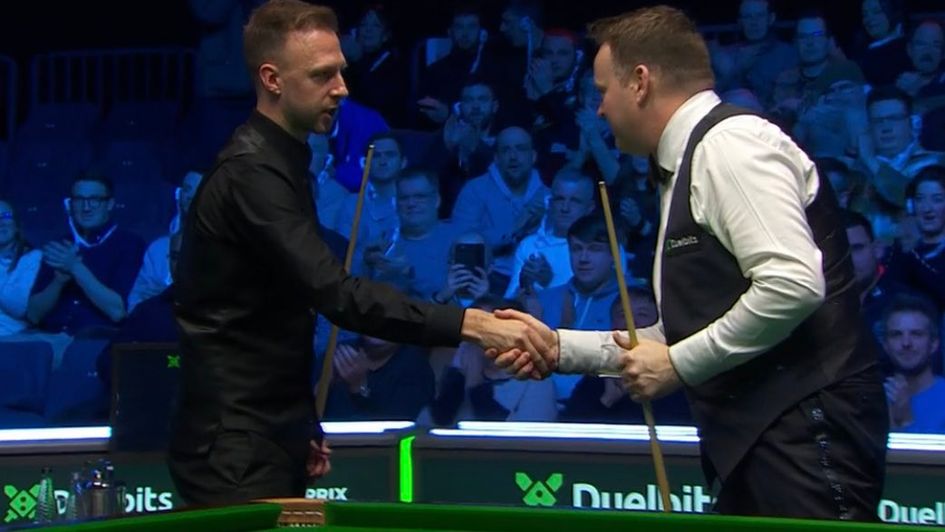 Judd Trump got the better of Shaun Murphy

Judd Trump is one win away from a swift double after beating Shaun Murphy 6-2 to reach the final of the World Grand Prix.

Last week's Masters champion was always in command against a back-to-form Murphy, who again hinted that his game is close to its best without perhaps being as sharp as he'd like in the tighter frames.

That was underlined by a tournament-best 140 clearance from Murphy in frame three and in the way he took his chances to take frame six, but was unable to capture a tight seventh frame which proved pivotal.

Handed an opening by Trump, Murphy needed a mid-range brown off the spot to all but secure the frame and cut the gap to just one, but missed the pot by a margin before losing a one-sided safety battle.

That battle ended with Trump instead handed the simple task of taking care of yellow, green and brown, which he did before sealing victory in the very next frame and a meeting with Mark Allen in Sunday's final.

"Shaun made a statement about a lot of my opponents crumbling against me and that he doesn’t think I have really played that well, and then he missed the brown (in the seventh frame)," Trump told ITV3.

"I was sitting in my chair thinking ‘it is easy to say that, but it is difficult to make those clearances under pressure’.

"I would say there was a bit more fire in me because of some of the comments, so it was nice to win that one.

"I know at this level, every time someone misses an easy ball I have to clear up. I put that pressure on myself and I kind of like that.

"I had a little break over Christmas and I feel like myself again. I feel relaxed, I'm happy out there playing. The Championship League I played really well and I took a bit of confidence from that, into the Masters, and now this.

"It's all going swimmingly again, but I know there's going to be difficult periods against Mark Allen, the way he's playing. I need to battle that out, ride it out, and hopefully find my best form."