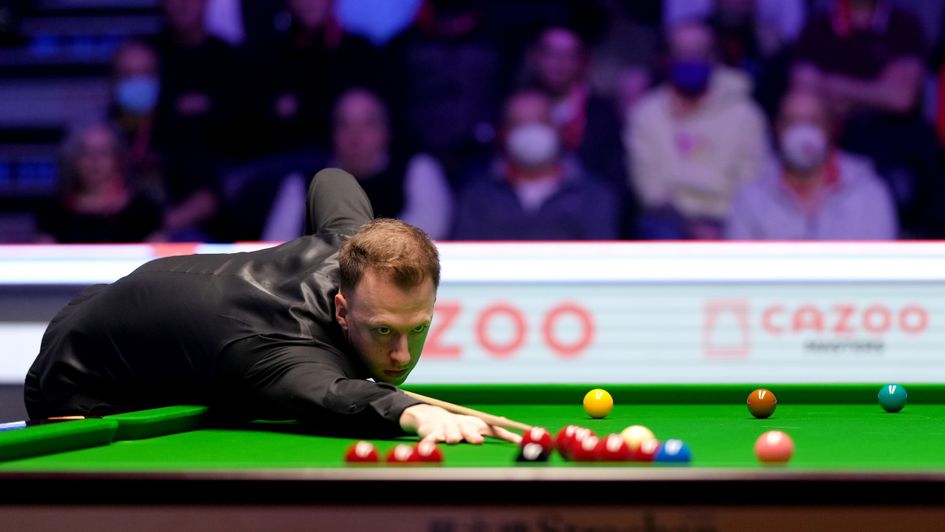 2019 champion Judd Trump came through a gripping match with Mark Allen at Alexandra Palace on Wednesday, eventually prevailing 6-5 to book his place in the quarter-finals.

In a contest that mixed high drama with big breaks and just a touch of needle, Trump somehow hauled himself over the winning line having appeared certain to slip 5-3 behind, only to scramble his way to parity, before producing a nerveless, match-winning break of 62 in the deciding frame after watching Allen build a handy lead.

It was a cruel ending for Allen who looked to have taken command of proceedings in an ultimately crucial eighth frame, only to miss a simple red with Trump needing a snooker, one he laid moments later, before Allen was unlucky to go in-off when escaping from another. Still, Trump's final pink into the green pocket was worthy of winning the match alone, and it proved to be a pivotal moment.

The afternoon began in breathless fashion with Trump centuries in the first and third frames sandwiched by a run of 92 from Allen, and the Northern Irishman drew level again when then dominating frame four.

Trump inched in front once more with a break of 88, only for Allen to hit back with typically pinpoint hand of 65 and then lead for the first time – Trump momentarily appearing to lose his way as the pressure cooker was turned up to maximum inside Ally Pally.

Allen's 4-3 lead really should have become 5-3, and though Trump patently rode his luck, his opponent was guilty of not delivering the knockout blow, something that would also haunt him when the match came to its crescendo.

Against all odds, Judd Trump has somehow snatched frame eight to level his #CazooMasters clash with Mark Allen.

With Trump now back on level terms, this season's Champions of Champions hero rattled off his third hundred break of the day – this time a stunning clearance of 135 – to put himself within touching distance.

However, Allen rallied manfully to take the match the distance, and he is sure to look back with regret having spurned a couple of golden opportunities early in the decider, most significantly when 25 points ahead and missing a mid-range red that would have opened the door to victory.

Instead, Trump seized his moment, looking untroubled as he firstly chipped away at his deficit, and then marched confidently towards the last eight. A fist pump, like the one he displayed at the end of the eighth frame, was again in evidence, before the Ally Pally faithful rose in appreciation at the end of a pulsating duel.

Trump said afterwards: “Wow. I’ve been waiting for this for a long time. I’ve lost a few close ones this season and to battle back there…

“It’s just you lose the belief when you lose these close games, but to finish how I did, I’m so proud of myself.”

When asked about the first pump, Trump added: “Normally I’m quite reserved, but I couldn’t help it, with this crowd in here. They pick you up, and I love the sort of rowdiness of this London crowd, it’s amazing.”

“I’m just getting warmed up now. I’m so happy to still be in it.”

In the evening match, Kyren Wilson held off a brave comeback from Stuart Bingham to win 6-5.

Wilson had been on course to lead 5-1, but Bingham rallied superbly to force a deciding frame, only for Wilson to hold his nerve to set up a meeting with Trump.