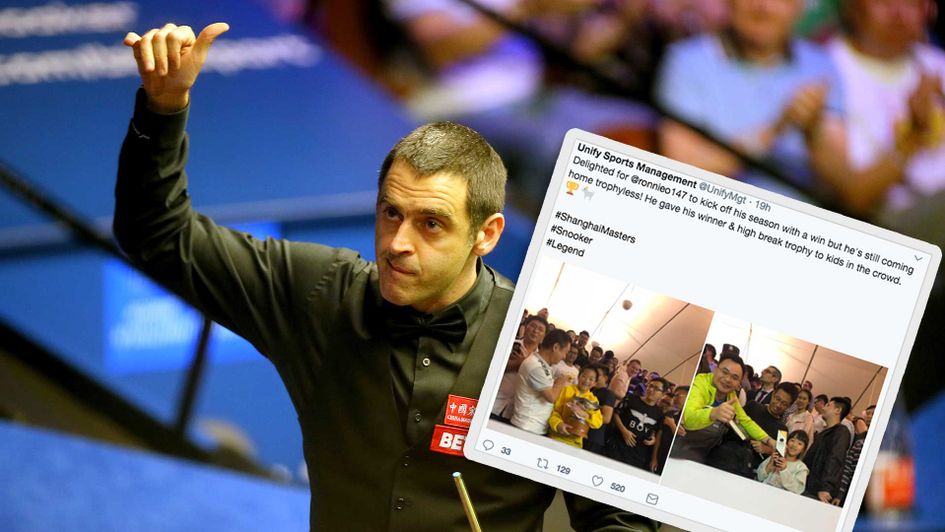 Ronnie O'Sullivan landed the Shanghai Masters title as he began his season in style - before gifting the trophy to a young fan.

The 42-year-old beat Barry Hawkins 11-9 in the final to successfully defend his crown and collect the £200,000 top prize.

But five-time world champion O'Sullivan then presented the silverware to a spectator.

Delighted for @ronnieo147 to kick off his season with a win but he's still coming home trophyless! He gave his winner & high break trophy to kids in the crowd. 🏆 🐐 #ShanghaiMasters#Snooker#Legend pic.twitter.com/Uj9qyMHXYb

O'Sullivan may have been repaying the locals for backing him throughout the week.

He wrote on Instagram: "Fans this week have been absolutely amazing. Thanks to everyone for their support. Delighted with the win."

He had trailed 6-4 after the afternoon session but turned the match around in the evening and finished with a break of 122.

"Tough on Barry, but I played well at the end of the match when it mattered so I am really happy to get this victory," O'Sullivan said.

"I managed to find something on the practice table before the start of the evening. I was struggling with my cueing a bit so it was nice to be able to play with a bit more confidence and freedom."