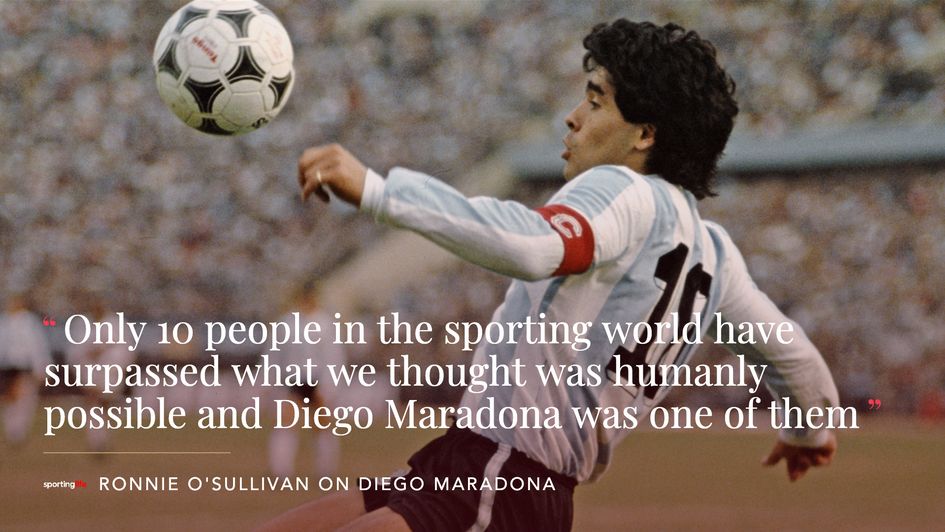 One great on another, Ronnie O'Sullivan has paid tribute to Diego Maradona

Both have dazzled on a green playing surface and after the passing of football great Diego Maradona, snooker's Ronnie O'Sullivan has paid tribute to the Argentine.

Both took their own sports to new heights with a range of skill, passion, personality and controversy not witnessed previously in their games.

O'Sullivan, a six-time world champion, is a keen study of legendary sports characters, taking inspiration and advice from many during his own career.

Speaking after his 6-0 victory over Leo Fernandez at the UK Championship, O'Sullivan was quick to pay his own tribute to the World Cup winner.

"I've always said I'd rather have a short but exciting life than a long and beige life and I definitely think Maradona had an exciting life.

"There have probably been 200 billion people come and gone in this world and only 10 people in the sporting world that have surpassed what we thought was humanly possible and will always be remembered for it and Diego Maradona was one of them.

"It wasn't just how he played but the passion and the emotion he had. You couldn't helped but get sucked into the energy he brought to the football field, let alone the skill and the mesmeric way he did it."