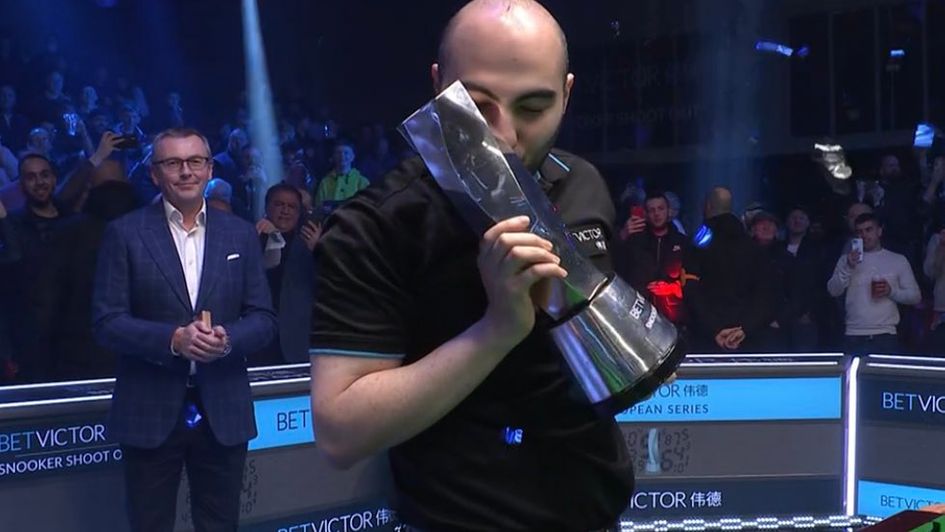 Hossein Vafaei won the Shoot Out

Hossein Vafaei became Iran's first major snooker champion as he produced a stunning clearance of 71 to beat Mark Williams in the Shoot Out final.

The 'Prince or Persia' arrived in Leicester mourning the recent loss of his grandma and dedicated the historic victory to her during his post-match celebrations and trophy presentations.

“That is for you grandma,” the 27-year-old told Eurosport. “It’s Mother’s Day in Iran and I am very proud I did that. I could not be more happy.

“It’s a big achievement for a country like Iran. Nobody knew about snooker before. Now they know. I’ve been working hard and thank God that finally I win a tournament and make my people proud.”

Vafaei has emerged as one of the rising stars of the game over the past couple of years and having now bagged his maiden ranking title in the shortest of all format, he'll widely be expected to go on to bigger and better things.

Mark Williams was bidding to become the first former world champion to win this tournament - which is regarded as too much of a lottery by many of game's biggest stars - but his only contribution to the final was his break-off as Vafaei potted a stunning long red before compiling his break of 71.

Hossein Vafaei's incredible pot straight after Mark Williams' break as he wins the Snooker Shoot Out title in one visit 🤯 pic.twitter.com/PfNrRDdtem

Williams was gracious in defeat, saying: “I thought I’d played a pretty good break-off shot there and what a fantastic red that was. To make that break under pressure to win your first tournament, hats off to him.”

Vafaei had looked set to lose his semi-final to Liang Wenbo, only for the Chinese player to miscue and pot the white while attempting a straightforward black off its spot on a break of 48.

Vafaei took advantage with a break of 54 to set up a final against Williams, who had made a clearance of 80 in his semi-final against England’s Robbie Williams.